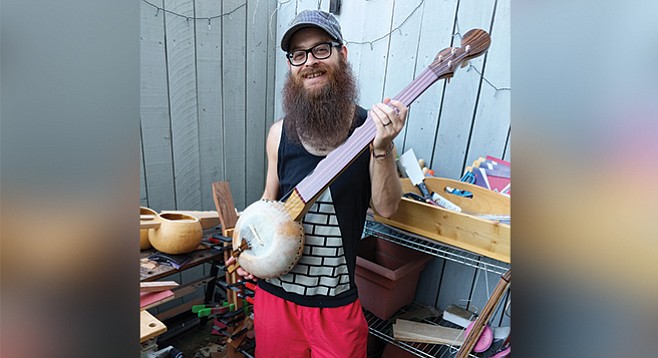 Chris Prieto’s only prior experience with a musical instrument was playing saxophone in the fifth grade. After becoming enthralled by old-time and country roots music a decade ago, Prieto decided to play the banjo. Four years ago, he not only became a student of the instrument, but a fabricator of gourd banjos.

“I focus more on the time-period when the banjo left African-American hands into white people’s hands essentially. The banjo has this rep for being this kind of Tin-Pan Alley, hillbilly, Appalachian mountain instrument, but, if you dig in, you can find these gourd banjos back as far as the 1700s via slave trade from west Africa and the Caribbeans,” Prieto said.

The banjos that Prieto builds certainly wouldn’t be confused with the banjos of centuries past. “It has a whole style to it,” he explained. “The banjo is much bigger. The neck is much thicker. Generally, no frets up until the late 1800s. It’s tuned really low, so it’s akin to a Spanish guitar. The strings are fatter. You’ve got gut (non-steel) strings. It just creates this different quality. It’s not metallic in any way. You still thumb a lot, but the playing is so early that in the actual advancement there are very little chords used. It’s all just snapping strings.”

Prieto gets his gourds shipped directly from a farm. They are covered in mold when they arrive, so scraping that off is a crucial step. The rest of the process entails cutting, sanding, shaving and the occasional use of beeswax or shellac.

“I code all day on a computer. Most things in my life require electricity, so I get a nice kick out of just going to my side yard and not having any power tools. It does have its drawbacks. I don’t have real production. People want banjos, but I can’t make them fast enough. I’ve been trying to do trade shows and folk music festivals and stuff like that, but it just never works. If I make three banjos, and I sell two, I’m stuck with one banjo. I’m not going to go set up a shop somewhere to sell one banjo,” Prieto said.

Prieto’s banjos are not for sale in any San Diego shops, but he does often have them listed locally on Craigslist. But all of the buyers so far have been out-of-towners. “Banjo nerds,” as Prieto lovingly describes them, on vacation looking to fill out their collections.

Gourd banjos are most often seen in historical recreations. Civil War reenactors occasionally use them, as do performers at museums. Once in a while, Prieto even gets in on the act either downtown (corner of 5th and G) or, fittingly, Old Town.

“I have a coffin with my name printed on it all cool, kind of in a fashion that is very appropriate for the era,” Prieto explained. “I have a couple of outfits. I’ve had hats made. Some custom leather shoes, and some fancy boots. I go all out when I do it. I restored a pair of glasses from the late 1850s. I have a pocket-watch from the 1860s that I restored. I even have historically accurate underwear and socks.”