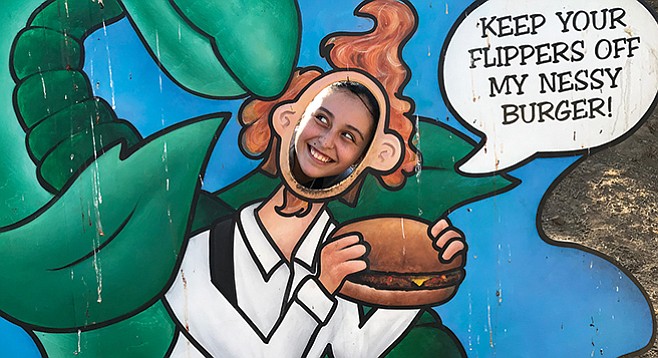 "You can see forever!” says Mag.

We’ve just got out of her car. Wind sifts up from the San Luis Rey river, snaking through the valley below. Interstate 15 swoops towards us like a gigantic suspension bridge. We’re in Pala territory. Nessy Burger is so close I can smell it. Nessy’s had a mystique for 30 years, like some lost Shangri-La. Partly, it might be because the first people to discover them were long-haul truckers who picked up chow chat on the CB radio from as far away as Newark, Baltimore, New York. The word got out about a burger joint for man-size appetites on a big rig gravel parking lot north of ’Diego, in easy reach of the 5 and the 15. 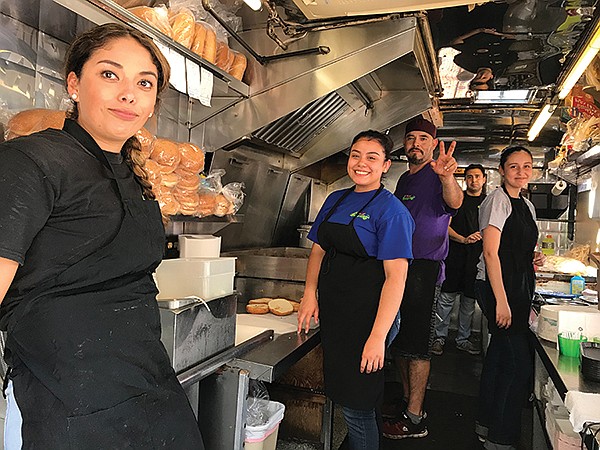 So Mag and I amble through a car park in front of the Pala Mesa Market, surrounded by mostly bare hills, until, right nearby, there’s an area covered by red bark chipwood. Long picnic tables, sun-faded umbrellas. People fill most of them, chomping away with heads ducked forward, like you do when you’re having at a really juicy boiger, to save your shirt from the drips. Good sign.

And behind them, the Nessy Burgers logo, with Nessy’s tail forming the “S.” 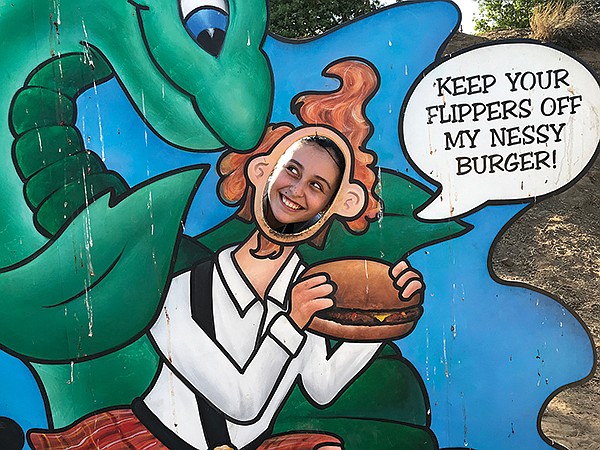 At the gedunk, two windows: “Order here,” and “Pick up here.” 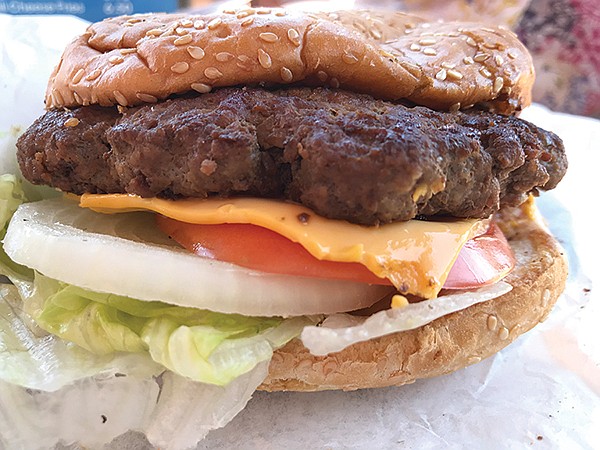 Mag’s Nessy Burger: everything but the egg.

“Decided?” says the gal, Jessica. Because there’s a line behind.

Burger choice is the Nessy, the Breakfast — which Jessica says is the Nessy plus a fried egg — and the Turkey.

“And we’re doing breakfast all day now,” says Jessica. That means anything with egg is still up for grabs. The ham and egg, or the egg and cheese. Would make sense for truckers and their crazy hours. 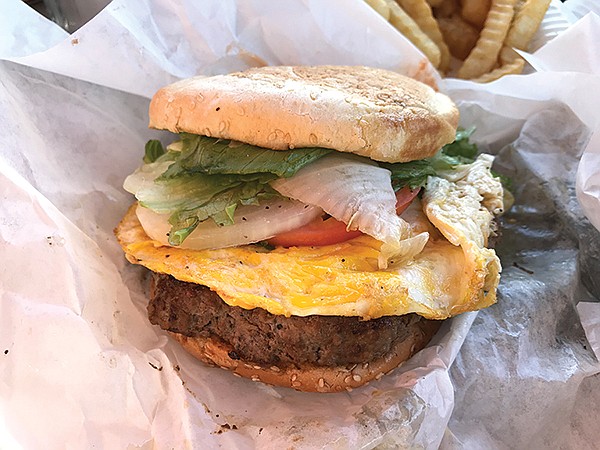 So now we’re sitting at a round picnic table. There’s a general feeling of, well, aaah. We’re in the countryside. Yes, distant whisk of the freeways, but mostly wind, birds’ tweets, kids’ yelps, dogs’ barks, and rolling hills with green patches of avocado and orange groves. Nice. Next to us, they’ve created a stand-up picture of Nessy, with a hole you stick your head in that makes you look like a running Scot shouting “Keep your flippers off my Nessy Burger!”

It’s Jessica. I go pick up the tray of nosh. Take it round the deck to our table. I like that they don’t have any inside seating.

The fries are fine, but it’s the burgers. They’re rough and big. There’s nothing machine here. The edges thrust out every which way, thick and caramelly-crunchy. My onion slice is thick and crunchy too (I could have had it sautéed). And I’m wondering if this slab of over-easy is two eggs, it’s so big. An ostrich egg, maybe?

“We weigh and hand-shape the burger patties every morning at six,” says this affable guy, Charles. I’d noticed him standing on the deck in the sun, smiling like a contented customer. But, turns out, he’s the owner. Pretty soon we’re talking. “My wife, Sandy, started Nessy Burger with her Scottish friend Alistair McBain, back in 1989. They bought this trailer from an NEX and started towing it to fairs, selling haggis. It wasn’t the greatest success. You need to be Scottish to love haggis.” 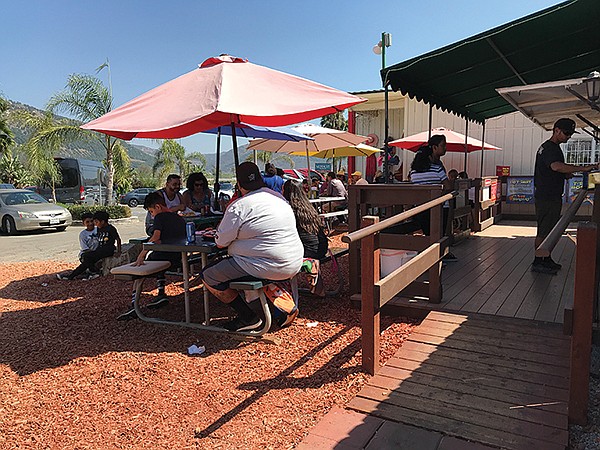 Outside seating only, on the wood chip patio.

So after almost running the trailer off a cliff, as they were towing it down a hillside, they decided to settle down. “They found this long-haul truck stop. Just a big flat gravel area,” Charles says. “They set up here to sell burgers. But with a difference. She only bought beef from a Fallbrook supermarket she trusted. We still do. Only fresh chuck and sirloin, ground each morning into 10lb batches. Then she’d add her own combo of seasonings. It’s never frozen, has no filler or preservatives or whatever. Nothing has changed since 1989.”

Around 2015, Charles faced a crisis. Alistair had long departed to set up his own business. Charles had met and married Sandra, but then she was hit by early-onset Alzheimer’s. “Then Caltrans needed the land to widen the road,” he says. “That’s when my incredible crew stepped in. I asked Rebeca — she’s our manager, she’s the mother hen — ‘What should I do? Do we sell, or carry on?’ And Rebeca said, ‘Let’s go for it.’ That was it. These days, we’ll do 400 burgers a day, 150 turkey burgers, 150 top sirloin sandwiches, 50 chili cheese nachos. We sell 9-10,000 pounds of meat per month.”

Way out here in the boonies? Who’d guess?

Mag and I finish up our burgers, check out Nessy and her story. People have been spotting the monster in Loch Ness since a holy man named St. Columba bumped into it in 565AD.

Real? All I know is its namesake, this burger, was super-real. Too real. A nap and a Scottish piper wailing in the heather would go down well right now.

Nearest Bus Stop: Park and Ride at State Route 76 and I-15 (on Old Highway 395, north of the Mobil and Circle K), 3 minutes’ walk to Nessy Burgers