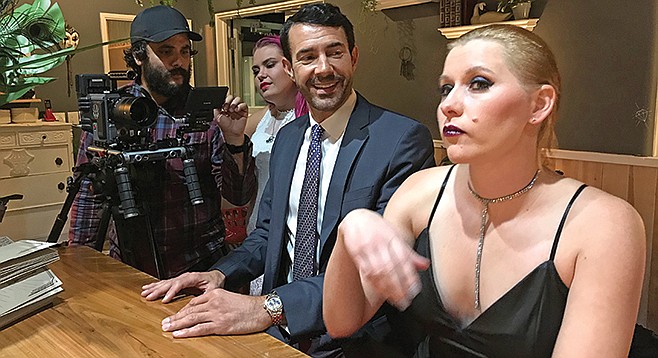 “If a scene is too complicated, too expensive, I find a way around it.”

Half past 10, Sunday night. Coronado. Just happen to walk into this parking lot outside an eatery called “Nado Republic.” Two men are standing in the lot’s shadows.

One has black eye-liner and black polish on his fingernails. He’s snarling at the other guy. Now I see him raise his fist.

The guy in a suit doesn’t move. He just grumbles, sotto voce. “I’m not doing the deal.” 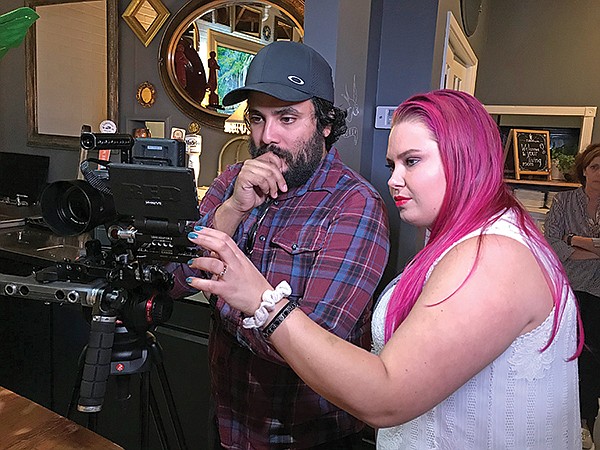 Then Mark Anthony Cox turns and says. “Except he does.”

Lady with shocking pink hair comes up. “Can I help?”

She’s Christie Williams. “I’m the producer. That means I deal with finances, scheduling, the mechanics, find talent, find locations. Pretty much everything except shooting and acting.”

She laughs. “Come in. We’re about to shoot Scene 23. The bar scene. It’s a confrontation between Carson and Mike Russell.”

I’ve happened on a shoot for the movie Carbon. It’s being filmed entirely in San Diego, directed by San Diego director Raul Urreola. 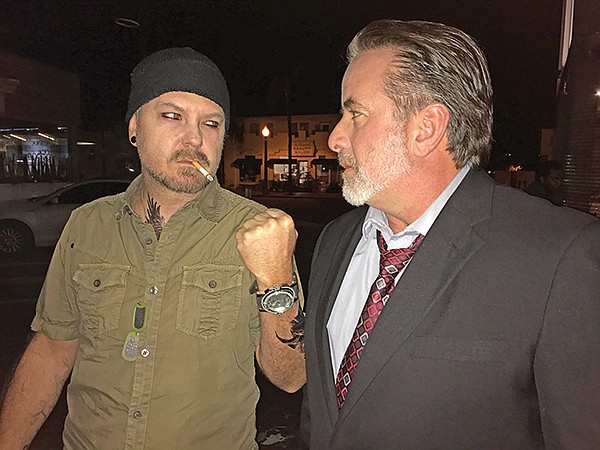 Cut to Nado Republic’s small bar: “Carson,” the actress Whitney Wegman-Wood, leans on it. She’s in character as a taut, slick-blonde femme fatale who, Urreola says, bribes, seduces, and threatens in order to get information for her small corporation as it tries to break in to the big time.

“She’s our anti-hero,” says Urreola, who’s sitting ready to shoot the scene he wrote for this feature movie he conceived. “Here, she’s going to intimidate Doug’s character, Mike Russell. She wants to frighten him into giving information. She will end up killing Russell.”

Doug Lito, who’s playing Russell, takes his place at the bar, right next to “Carson.”

This is Urreola’s big-screen directorial debut. He has directed hundreds of smaller commercial projects, TV series, shorts, “whatever,” over the last eight years. “I started in 2010. My grandfather was a painter in Spain, my father was a photographer in Mexico City. I’m the first generation born here. I’m 31 now. I just heard this voice calling. I knew it was time to try a feature film.”

He got the idea for the movie from a National Geographic article about corporations fighting over mineral rights in West Africa. “This film is a bit like House of Cards. Except we’re self-funded. We have to keep the production modest. It’s a thriller, but the violence is mostly implied in the dialogue. We’re using what San Diego offers us for free. The whole cast and crew are doing this for love. Nado Republic has let us use their restaurant. A Rancho Santa Fe plastic surgeon has lent us his yellow Lamborghini. If a scene is too complicated, too expensive, I find a way around it. We’ve probably spent under $15,000 so far. We’re going to self-distribute. VOD (Video On Demand). But it has been a beautiful experience. OK. Ready everyone?”

Carbon will have its premiere at the Reading Cinemas Grossmont. Date to be announced.