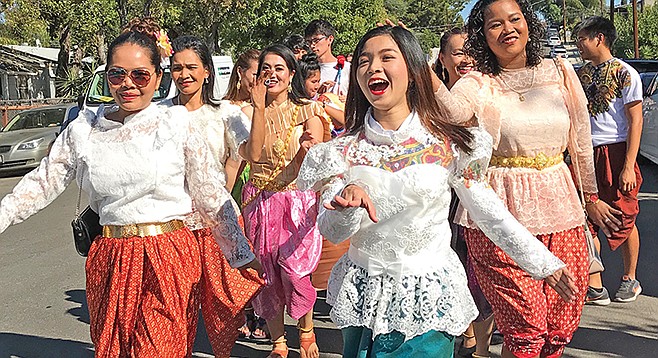 Float your troubles away

The launch of Loi Krathong, the basket-floating festival 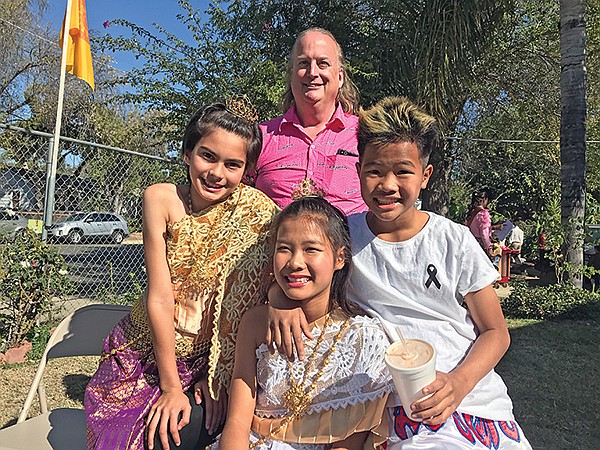 The young man in his sampot chong kraben picks up a red traffic cone and uses it as a loudspeaker. “Let’s go!”

He’s launching the parade around the temple grounds, kicking off Loi Krathong, the basket-floating festival. It’s the day of the full moon of the twelfth month in the Thai lunar calendar, and this is Wat Thai, the Buddhist temple in Escondido.

Sampot chong kraben? The piece of cloth that you wrap around your loins, man or woman, bring forward through your legs, and tuck into the front. They have been worn for millennia in Thai and other societies. Everybody here seems to be wearing them today. Even some of the many farang (Western) husbands of Thai wives have wrapped themselves in them. 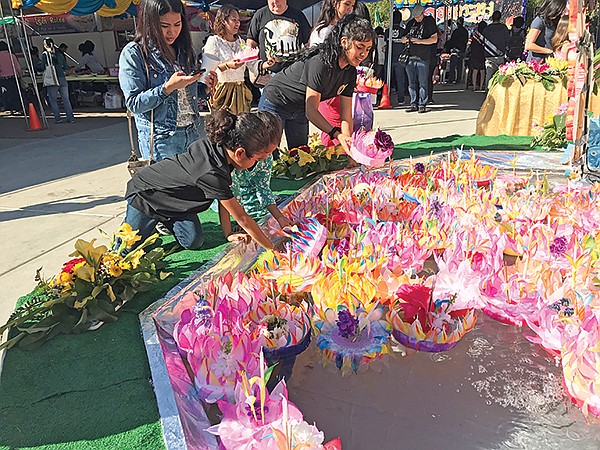 Trelynn (5), Dontre (6) and their mom, Ploy, send off all of last year’s worries

Bill Eitel is one. He’s used to this. He and his wife Onny run Onny’s Thai Restaurant in San Marcos. Right now, both of them are in the parade, dancing out along West 11th Avenue. Ahead of Bill, Paul Jayne, also in a gold sampot chong kraben, has been given the honor of wheeling a white marble buddha down the street.

Christian Seymour is in standard western gear. “I went to Thailand as a Mormon missionary,” he says, “but I ended up backing off from trying to convert the Thais I met. Their families were so strong, and they were so polite about listening to me, that I didn’t want to upset what it was they had. It was their happiness that kept me going. I live in Escondido now, and now my happiest thing is to come here.” 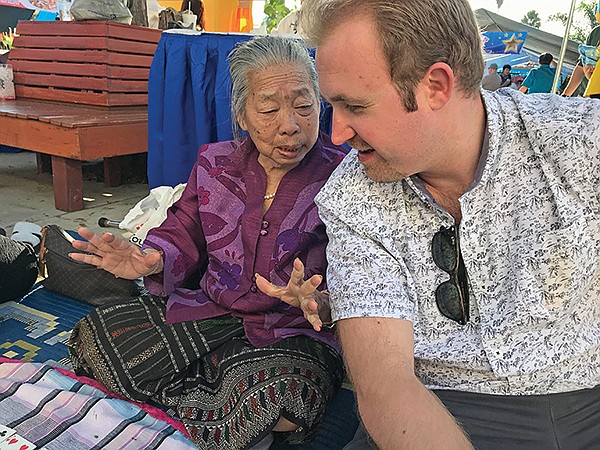 And, says Paul Jayne, there’s a bit of reverse cultural missionary work going on here. “At the temple school, they have teachers flown in from Thailand. They teach these Thai-American kids everything from dance, to songs, to Thai boxing, and Thai language.”

“It’s a hard language to learn,” says Christian, “44 consonants, 25 vowels, and all those tones.”

The parade’s back in the compound. There are speeches and dances, a beauty contest for girls, Thai boxing, and a vegetable-carving class. Food booths have blossomed everywhere, and in the hall, assembled monks are chanting in Pali-Sanscrit.

I come across Christian cross-legged beside a little old lady who has spread a square of playing cards in rows on a cloth on the rattan mat. She’s looking at him, and then down at the cards.

“Reading my fortune,” says Christian. He rattles off some expert Thai to a second lady. “She has to translate,” he says. “The fortune-teller only speaks Lao. “She’s saying the cards tell her a lot of girls want to know me, but I’m not wanting to know them.”

Then the old lady points to the eight of hearts. “Next year,” she says, “you will get married.”

Christian looks pleased. Nearby, kids and parents are launching their loi khratongs — floating baskets — into the pond the monks have set up.

“You put all your regrets and resentments into that basket,” he says, “and float them away, so you can start afresh. Nice idea.”