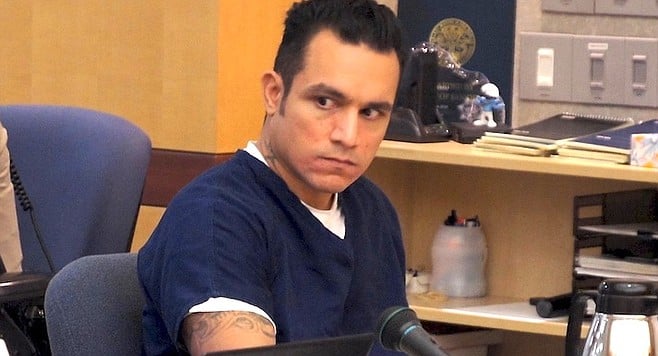 Man denies murder by the pool

Surveillance cameras and lots of witnesses

Multiple witnesses and surveillance cameras all caught the shooting next to a pool in a Vista apartment complex last summer, according to statements in court yesterday, Tuesday, November 6. 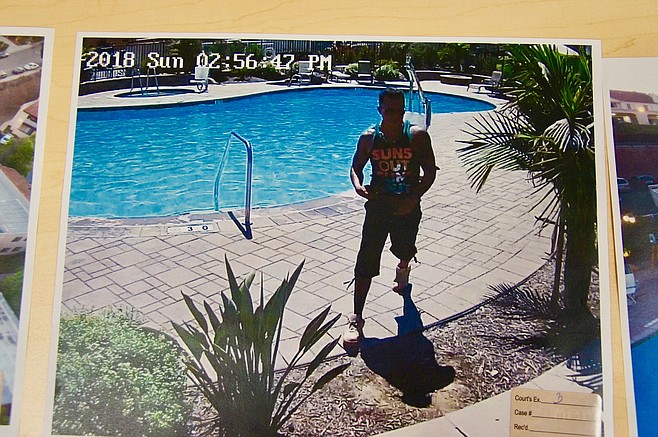 Prosecutor said Montelong was caught on this surveillance video.

Estevan Steve Montelongo, 41, pleaded not guilty to first-degree murder during a preliminary hearing in which five eye-witnesses said they saw Montelongo shoot his girlfriend on July 22. The community pool at 633 Ascot Drive was popular with tenants and friends and family that hot afternoon.

Michelle Hashtani, 28, first came to the pool after 2 pm that Sunday, everyone agreed. Some minutes later Montelongo, who was the woman’s roommate and boyfriend, joined her. He sat on her reclining pool chair to speak with her. The woman got up and moved to a different place at the other end of the pool, and the man followed her, according to witnesses.

Defense attorney Matt Wechter suggested that Michelle Hashtani made a one-fingered hand gesture to Montelongo just before the shooting started. Michelle Storms, a San Diego Sheriff’s detective, confirmed that is what she saw on surveillance video she obtained. The apartment complex has multiple cameras positioned all around the property, the detective said.

One witnesses testified, “He was saying, 'I hope you die!' ” This witness heard two shots, then four more, and “She was already on the ground, and he was still shooting her as he was saying it.” Another witness reported: “He did say, ‘I hope you die! Bitch!’”

One man said, “There was just smoke coming out of the firearm. It looked like a very small revolver, it was chrome. He was shooting at the woman.” After the woman dropped to the ground, the shooter walked swiftly away and “He said that 'she messed up,' and he wasn’t here for anyone else.”

Another witness said that after the shooting, “He left, he walked past me, he said, 'Don’t worry, nobody else is going to get harmed here.' ”

Witnesses said the gunshots sounded like fireworks, or a cap gun, or “pops.” People heard four shots or five shots or six shots. Calls started coming in to 911 at 2:56 p.m.

The victim was taken to Palomar Hospital, where she underwent emergency surgery; she lingered until August 3. Pathologist Dr. Robert Stabley testified that he found one bullet entry wound on the left side of her head, and one bullet partial-exit wound on her right forehead; he said the bullet exited her skull but not the skin. “I found a total of 8 fragments of bullets, inside her head,” the pathologist said. He was not able to say if the fragments were from more than one bullet. There were no other bullet wounds on her body.

The suspect was found two days after the shooting, on July 24, in Pueblo, Colorado. Montelongo was extradited and booked into San Diego County jail on Aug 16. Jail records describe Montelongo as 5 feet 9 inches tall and 170 pounds. He is on a no-bail hold. Judge Timothy Casserly ordered Montelongo to face one murder charge.

Sheriff's detective Michelle Storms reviewed video from multiple surveillance cameras, the apartment complex has cameras around the pool and parking areas and more. The prosecutor claims the whole crime is caught on video, start to finish. 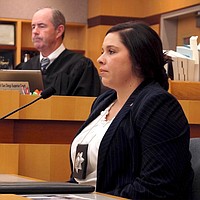 This dirt bag as no choice but to plead not guilty. After the preliminary hearing the negotiations begin between the DA and the defense attorney. If a plea deal is reached then the dirt bag will plead guilty. In any event he will spend the rest of his worthless life in prison. Three hots and a cot at the expense of the taxpayer. 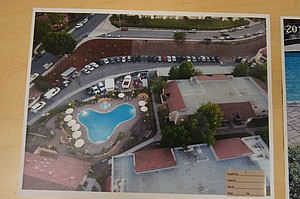