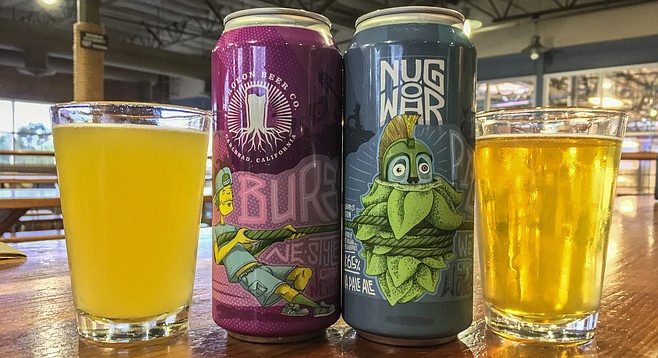 Collaborations are more fun in pairs

Brewers team up for beers that play well together

Pouring nearly 50 distinct brewery collaboration beers this year, the Karl Strauss Brewing beer week party dubbed Collabapalooza (November 10) showcases a San Diego brewing community that remains for the most part interconnected and mutually supportive despite an increasingly competitive craft beer market. More often than not, a single collaboration brew also reveals how local beermakers can push each other to greater heights of creativity. And lately, we’re seeing enough creativity to produce two beers at a time. 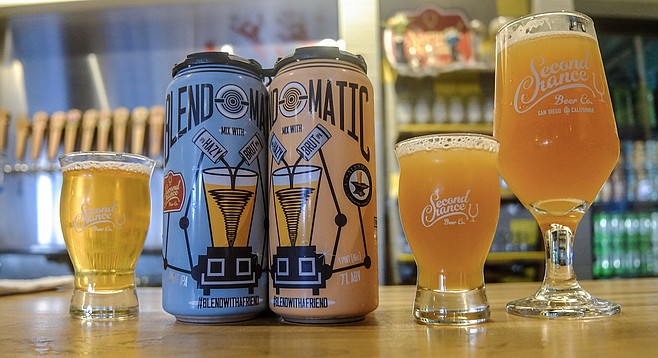 On the left a brut IPA, in the center a hazy IPA; in the large glass a mix of both beers.

A recent trend has emerged as local breweries realize the benefit of producing conceptually related beers in pairs, encouraging beer drinkers to try both in order to compare and contrast them.

The latest example is a pair of beers made by 2Kids Brewing, Savagewood Brewing, and Alex Van Horne, founding brewer of recently shuttered Intergalactic Brewing. Van Horne and Savagewood founder Daryl Brown were both visiting 2Kid’s Miramar tasting room, and as the brewers discussed doing a collaboration, the idea sprung up to use the same malts and hops to produce two complementary IPAs: one a hazy, Northeast style IPA made and released at 2kids; the other a West Coast IPA made and sold at Savagewood.

“We were specifically talking about giving folks a reason to go to both tasting rooms,” says 2Kids cofounder Robert Dufau. “If we can take a similar beer and do it two ways, that gives everyone an opportunity to drink the beer at both locations.”

Both beers take the name Kessel Run IPA, a Star Wars Millennial Falcon reference backed up by the corresponding beers’ hop bill: Milennium hops for bittering and Falconer's Flight for aromatics, plus Galaxy hops, if only to punctuate the botanical pun. The juicy hazy IPA released at 2Kids the first Friday night of beer week; the more dry and bitter Savagewood version will be tapped this Friday, November 9. Depending on response, one or both versions could wind up being canned in the future.

Burgeon Beer Company and Pizza Port Brewing canned a similar concept in October, each releasing a Citra wet hopped IPA dubbed Nug o War. Even the artwork for the Burgeon hazy and Pizza Port West Coast IPAs lined up, so that if you placed the two cans together, they form the cartoon image of two brewers playing tug of war over the same hop cone. Drinkers who bought cans of both could try the similarly hopped, yet distinctive beers side by side, and maybe decide once and for all whether they prefer east or west coast style.

Another beer week release makes the two-brew concept even more fun. Second Chance Beer Co. and AleSmith Brewing Company conspired to brew two beers under the name Blend-O-Matic. Along with a hazy IPA, they produced another trending style: brut IPA. But rather than make the same beer two ways, veteran brewers Marty Mendiola and Peter Zien crafted them to actually be tasted in the same glass.

The AleSmith brut fashions the effervescent bone dry style with winey Nelson Sauvin hops, while the Second Chance hazy uses a mix of fruity and tropical hops: Mosaic, Idaho 7, and Vic Secret. Mixed four packs of cans sold by Second Chance give drinkers a chance to drink a can of each version individually, and also to achieve the beers’ true intention: blend them together to discover how the distinctive styles and tasting notes play together.

"Second Chance and AleSmith plan to continue the Blend-O-Matic concept with other beer blending ideas, including barrel aged concepts." The current blend will be pouring at Collabapalooza.