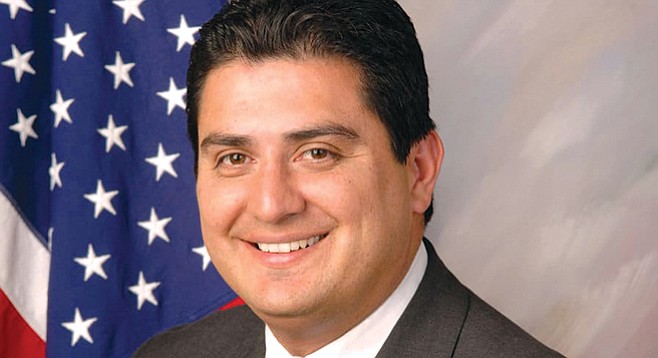 Doing fundraising time State Senate Democrat Ben Hueso, running for reelection in next month’s primary against retired Republican Superior Court Judge Luis Vargas, is seen as the likely winner in the majority Democratic 40th district, and hence won’t be spending much money. Through May 19, per campaign filings, Hueso has bagged a total of $100,110 this year for his reelection account, and spent $234,734, with cash in the bank of $189,558. Contributors have included $2000 on May 17 from payday lender Check into Cash of California, based in Cleveland, Ohio. Last October, the Illinois attorney general’s office filed suit against the company. “Check into Cash inappropriately tries to retain low-income workers by requiring them to sign unfair noncompete agreements that attempt to prevent workers from getting better jobs elsewhere,” said Illinois Attorney General Lisa Madigan in a news release cited by the Chicago Tribune. “We should be encouraging, not stopping, people to get better, higher-paying jobs.”

Besides his reelection stash, Hueso maintains a legal defense account to cover costs stemming from his August 2014 arrest for drunk driving. Last year the California Association of Electrical Workers kicked in $10,000 and in December 2016, the Professional Engineers in California Government PAC came up with $5000. As of May 19, according to the latest report, the fund still owed debts of $3167 to the Kaufman Legal Group of Los Angeles and $23,952 to San Diego’s Ferris & Britton.

Legend of Zelda — Breath of the Wild

Have iPhone 7, will spend While politicos battle over whether the county should be devoting more tax money to the homeless and downtown’s hepatitis crisis, District Attorney Summer Stephan, up for election for the first time next month, has come up with another way to spend public funds. She’s currently asking for bids to equip each of her 200 Apple iPhone 7-toting employees with “Seidio Surface Case and Holster with Kickstand or Equal,” which retail together for about $60, according to a request for quotations, due May 30.

Stephan isn’t the only county official spending large on high-end products from and related to Cupertino’s Apple, Inc., which coincidentally has been waging a legal war in San Diego federal court against local favorite Qualcomm, Inc. over the allegedly exorbitant price of its cell-phone chips. The county’s Auditor and Controller’s office is out with a May 17 request for quotation regarding the purchase of seven top-of-the-line iMac Pro desktop computers, which start at $5000 retail and can run as high as $11,000 or more. At the same time, the county librarian wants to shell out for 15 new video game consoles and starter kits, along with four distinctly non-educational games for each. The “preferred brand is a new Nintendo Switch video game console,” according to a May 15 request for quotation. In addition to the machines, which list at $299.99 each, games to be purchased by the county include Legend of Zelda - Breath of the Wild; Pokken Tournament DX; Super Mario Odyssey; and Mario Kart 8 Deluxe. Each currently sells for $50 or so online, bringing the total tab for each unit to over $500.

Jinxed at the Hotel Doug With word that ex-Union-Tribune publisher and San Diego Republican power broker Doug Manchester has hired a lobbyist to promote his long-stalled nomination to be ambassador to the Bahamas, political eyes have returned to Austin, Texas and the developer’s newly-opened Fairmont Hotel. Jinxed from conception with a series of construction delays, flooding from broken water pipes, contractor lawsuits, and a pizza-oven fire before finally opening its doors to the public last month, the upscale hostelry has continued to face adversity, including another unscheduled drenching. “Apparently a pipe on the 7th Floor burst today according to social media reports,” per a May 12 post on the Skyscraper Page forum, an opinionated rumor site, which featured a photo of water cascading from a hall ceiling.

A potentially dangerous May 20 standoff with a hotel guest required police resolution. “The incident started as a domestic disturbance and escalated when the suspect barricaded himself in a hotel room with a weapon,” reported CBS Austin. “SWAT arrived on scene and was able to talk the suspect into surrendering peacefully. At no time was there a threat to the other guests.”