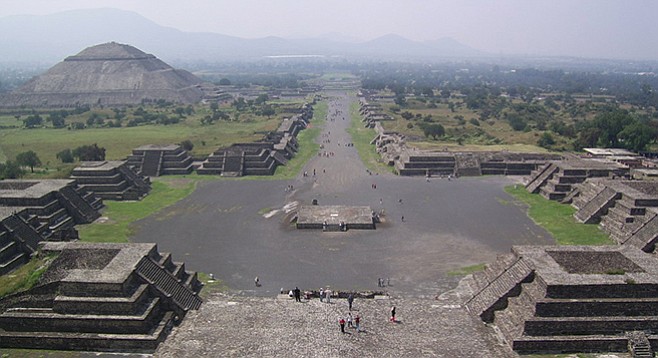 In 2003, an archaeologist digging near the Feathered Serpent Pyramid, one of the grand structures at the ancient city of Teotihuacan in Central Mexico, felt a soft spot in the earth that turned out to be an entrance. When he descended, he found a tunnel the length of a football field containing over 50,000 objects associated with religious practices and cultural self-definition: figurines, insect casings, rubber balls, obsidian knives and tools, arrowheads, basketry, beads, seeds, glass, shells, jewelry, and pottery. 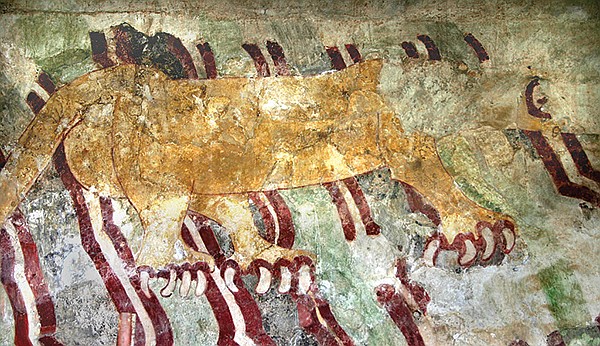 Puma mural on the Avenue of the Dead. The animals are part of the militarist order.

The tunnel’s discovery and ongoing excavations have expanded our still-limited understanding of Teotihuacan’s three-tiered cosmos, composed of the sky-world of gods and spirits; the middle world we inhabit and on which we build tall things like pyramids as if in offering to the sky kingdom; and the rivering underworld, the place of the dead. Dug before the Feathered Serpent Pyramid (along with the equally daunting Sun and Moon pyramids) was erected, the tunnel was evidently root and foundation of the Teotihuacan cosmos. Two short, square, stolid anthropomorphic figures found there look like Greeters, or Witnesses, and they’re thought to mark the location of the axis mundi, the “world tree” that connects the three tiered worlds. 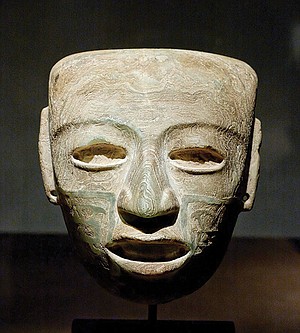 Most of the masks are carved from greenstone and polished to a glassy Brancusian sleekness.

Politically and economically the largest and most dominant city in the early centuries of the millennium, Teotihuacan encompassed not only grand monuments but also vast single-story apartment compounds that housed the artisans, laborers, administrators, and other populations that made the city run. Its dynamics of growth and decline are ones we’d recognize. It was for five centuries the most populous city in the Americas, a busy trade center that attracted diverse immigrant populations from all over Central Mexico. In time it grew to a hundred thousand inhabitants spread over 10 square miles. And it grew quickly. Between the first century BCE and 250 CE, the population rose from 20,000 to 80,000 people, but by 500 CE, for reasons only dimly understood, the population had been reduced by half. There may have been erosive internal divisiveness among the various ethnic groups; there may have been a drought, or volcano eruption. In 550, at any rate, the teotihuacanos set the city’s ceremonial center on fire, smashing ritual objects and large sculptures, possibly to drain them of their sacred power. The administrative and physical infrastructure that sustained the city finally collapsed and the populace abandoned their city.

City and Cosmos: The Arts of Teotihuacan, a meticulously laid out, informative exhibition at the Los Angeles County Museum of Art, not only includes hundreds of spectacular objects, it’s also the rare exhibition that makes one grateful for information-rich wall panels and for video presentations that orient us to the city’s topography and tell us much about its sense of the sacred. (I saw the show in San Francisco, where it was titled Teotihuacan: City of Water, City of Fire.) The exhibition also spills over with mystery and inference. Relative to its expanse and plentiful archaeological finds, we still know relatively little about the city’s history, rituals, and daily operations. Its artifacts and buildings are pale reminders of the original vibrant reds, greens, blues, and yellows that teotihuacano artisans preferred and that are now visible only as spectral residues of pigments that created a decorative divine brilliance. The Feathered Serpent façade, now a dulled earthen stoniness, for instance, was once bright red and green. The houses and compounds of well-to-do inhabitants were covered with frescos, and the walls of shared common spaces in the compounds’ patios and courtyards displayed religious imagery. One of the most dramatic is a long narrow panel depicting the feathered serpent, its long scaly textures fledged with quetzal feathers, and another panel with a row of flowering trees watered by the underworld stream and by the rain brought by Teotihuacan’s most critical and determining deity, the Storm God. Painters stirred gold-hued mica and silvery hematite into their pigments to create a surface that trembled with reflected light from shallow pools in the compounds’ patios.

Teotihuacan had no wheel, pack animals, or metal tools, but its commercial vitality attracted populations that settled into ethnic enclaves and maintained their own languages. It had big-city problems: immigration, overcrowding, public health issues, infrastructure. It maintained its power with a militarism inseparable from religious practice. The Feathered Serpent Pyramid housed tombs of hundreds of sacrificed warrior-priests and was a piece of the cosmology that provided the city with its structural model: under the Primordial Mountain (the Pyramid) was a sacred cave (the tunnel) that led to the watery underworld wherein lived the gods responsible for maintaining universal order. The Storm God, the most important and most frequently represented deity, was a life-giver and destroyer, associated with fertility, lightning, fire, warfare, and conquest; his powers brought the rain essential to agriculture and also, therefore, to military dominance. He often holds lightning bolts, sometimes maize and squash plants. In an exquisite mural illustration (the city had thousands of square yards of painted surfaces) he carries multicolored maize cobs in a finely woven sack.

The Storm God was a ferocious entity with “goggle” eyes, huge teeth, curved upper lip, and curling fangs. Honoring the deity who brings rain was essential in a dry, landlocked climate. Water in any manifestation was critical. Teotihuacan especially valued shell artifacts for their fetish powers. Its trade and import business accounted for the several large marine-snail conch shells, probably gifts from Maya rulers, included in the exhibition. Probably used as trumpets, they were incised with mysterious lyrical signs and sacred figures. (Blink and you’ll see Matisse’s and Picasso’s skating, loping lines.) Teotihuacan was a production center of obsidian goods, and excavators have found dozens of obsidian shanks called “eccentrics,” with curved serrated blades shaped to resemble the Storm God’s lightning bolts — sleek, menacing, weaponized weather patterns. One obsidian figure looks like a svelte human-shaped cudgel.

Teotihuacan was built on sacrifice, and many of its most compelling artifacts are instruments of violence or evidence of sacrifice. One curved obsidian knife is a jagged religious-surgical object evidently designed to cut through blood vessels to extract an animal or human heart. The Moon Pyramid contained complete skeletons of pumas, wolves, crows, owls, rattlesnakes, and other creatures buried alive. When they built the Feathered Serpent Pyramid, teotihuacanos buried hundreds of sacrificial victims along with military ornaments and arrowheads, many wearing shell necklaces carved to look like human teeth. One dazzling re-constructed necklace is made of 300 pieces arranged in symmetrical patterns that suggest cosmic balance and order.

But why carve shell for ceremonial necklaces shaped like teeth? It’s difficult and exhilarating to parse the evidence: we have to “read” the artifacts because we have only scant extant writing, nothing like the Maya’s elaborate hieroglyphic calendars, royal histories, agricultural and military records. We know that Teotihuacan was a warrior-priest culture and that sacrifice was central to their religious practice. Decorations in the Sun Pyramid depict felines (the most frequent animal image they’ve found) eating human hearts. Scholars think these terrifying creatures represented superhuman powers and were invoked to protect priests and warriors. The city’s main north-south thoroughfare, the Street of the Dead, is lined with mythological murals dramatizing military conflict. Teotihuacan culture was a system of enchantments, of appeasing the deities of water and sun. The murals and many of the stone sculptures — big, bold, menacing serpents, birds, and felines — tell us that Teotihuacan culture was grounded in an enchanted ferocity, or ferocity of enchantment. The animals themselves are part of the militarist order. One recurrent motif, an armed owl, is a composite of values, combining predation, beauty, stealth, flight. Like so much animal imagery at Teotihuacan, it seams together the sacred and profane. A mirror back decorated with an armed owl shows a creature with outstretched wings and two darts behind its head, its body covered by a shield with an image of a human hand.

City and Cosmos: The Arts of Teotihuacan thrills because it offers a master view, however sketchy, of a civilization and fills its visionary expansiveness with myriad objects grand and tiny. The fragmentariness of our knowledge is itself an enticing invitation to re-imagine the city, its culture and religiosity. We have few contemporary records and no epic narrative to give an articulated structure and form to its history. We have only these objects. But what objects! I’ve seen the exhibition three times and each visit added to my personal archive of eloquent beauties. The exquisite masks, most carved from greenstone and polished to a glassy Brancusian sleekness, probably represent the youthful idealized face of the Maize God. And the many small, stylized figures shown with cradles and babies and decorated with ear flares, hats, and tunics, must have been fertility fetishes. Even the smallest objects enchant, like the two-inch-long drum-shaped, hollowed-out, ceramic ear-spools, once filled with rattles, bearing images of masked warriors. And my favorite, for its clenched, compact energy: a ritual mirror supporting a jade jaguar mosaic, used possibly for divination or ancestor veneration. The jaguar’s tight little profile has a wound-up fierceness and looks like it’s about to release its incipient powers at us, right now.