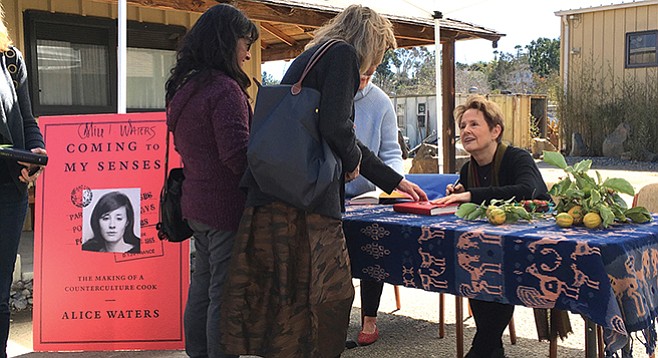 A long line for Alice Waters

On this particular Sunday, the longest line at the Chino Farm vegetable stand in Rancho Santa Fe is not the one for the pricey produce, or even for the wood-fired Stinging Nettle pizza. Instead, it snakes steadily toward the table where celebrity chef and food activist Alice Waters is signing copies of her memoir, Coming to My Senses: The Making of a Counterculture Cook.

She is here as part of the Good Earth/Great Chefs Series; proceeds go to benefit her Edible Schoolyard Project. (Waters, founder of the Berkeley food mecca Chez Panisse, famously put Chino Farms on the map in the 1970s, when a friend sent her a box of their haricots verts — green beans — and they proved to be just like the ones she’d had in France.)

Rob Hillman is here because “it’s Alice Waters! She was a fun-loving girl who went to France and came back and started a restaurant with some friends on a lark, and look at her influence. Today, everybody talks about fresh, locally sourced foods, but back then, it was remarkable. My son actually worked for Bob Cannard at Green String Farm in Sonoma; Waters buys a lot of their produce. So she’s influenced his generation as well as mine.”

Carrie Dederich loves making Waters’ “roasted tomatoes, where you just take tomatoes off the vine, put them on a sheet pan, slather them with olive oil and whole cloves of garlic, and throw them in the oven at 250 degrees for like ten hours. Then you pull them out and smash them on pasta, and that’s it. Her stuff is so simple and beautiful. There’s a line in the book: ‘Beauty is the language of caring.’ I think she’s reminding everybody that to be human is to recognize and appreciate beauty. If not, God would be playing to an empty house. That’s her message, and food is her medium.”

Gloria Aronson took her family to Chez Panisse six years ago. “My first time having persimmons as a garnish on a salad — sliced thin. I do that with my own salads now, when they’re in season. We had our table right near the kitchen, and when we finished, they asked if we wanted to have a tour. Two years ago, my daughter Kendra self-published The San Luis Obispo Farmer’s Market Cookbook, and left a copy for Alice at the restaurant. Alice made a wonderful comment that Kendra could use in her marketing. She sold 10,000 copies.”

Margeurite Gifka followed Waters into the business — and beyond. After learning restaurant work in New Orleans, she cooked at a fancy dude ranch in Montana, “with all this amazing produce that we could just go and buy. The most gorgeous vegetables. You let whatever you have talk to you. ‘Let’s take these celery leaves and make an Italian salsa verde. Then maybe pick up a piece of fish to serve with that, and maybe some celery root to tie the two together.”

Today, she’s a food coordinator at Third Avenue Charitable Organization. “We serve two meals a week to the community. There’s a church garden that grows beautiful greens for us, and we pick up donations from Albertson’s three times a week. So it’s very seasonal: we get what’s available, and that determines what we make.”