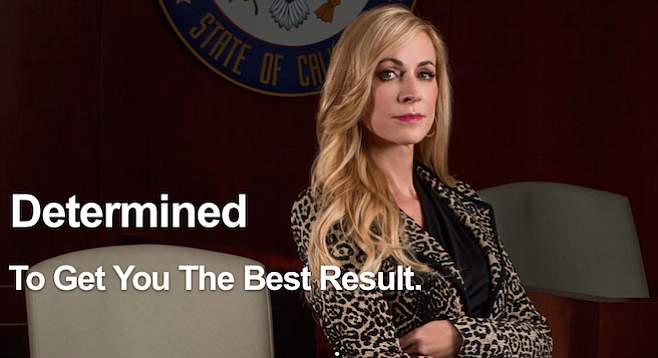 Mary Frances Prevost, who billed herself as “California’s Top Criminal & DUI Attorney,” but was disbarred early this year, ls trying to raise money over gofundme.com so she can take legal action against Motel 6 in Mission Valley and its parent company.

Prevost was staying there with her dog, Valkyrie, on April 28 of this year. She claims she left the dog in the room but came back to find her missing. She states that she searched for hours until Animal Control called to tell her the dog had been killed on Highway 5. She claims Motel 6 won’t show her security tapes and asserts the dog “opened the door and released herself,” according to Prevost’s gofundme.com statement. She says she has contacted an animal rights law firm in Los Angeles but needs funds for “filing fees, subpoena fees, discovery fights, depositions, court reporters and jury fees.”

When I called Motel 6 I was told, “We are not talking about that, not giving out any information, sorry” and the clerk hung up.

If activists take Measure L off ballot, they would no longer face mounting legal fees
Next Article

Mary Frances Prevost, who billed herself as “California’s Top Criminal & DUI Attorney,” but was disbarred early this year, ls trying to raise money over gofundme.com so she can take legal action against Motel 6 in Mission Valley and its parent company.

Prevost was staying there with her dog, Valkyrie, on April 28 of this year. She claims she left the dog in the room but came back to find her missing. She states that she searched for hours until Animal Control called to tell her the dog had been killed on Highway 5. She claims Motel 6 won’t show her security tapes and asserts the dog “opened the door and released herself,” according to Prevost’s gofundme.com statement. She says she has contacted an animal rights law firm in Los Angeles but needs funds for “filing fees, subpoena fees, discovery fights, depositions, court reporters and jury fees.”

When I called Motel 6 I was told, “We are not talking about that, not giving out any information, sorry” and the clerk hung up.

Make a wedding-and-wine statement from Nordstrom Rack and Schutz

Report from the land of brand whores

So she left the dog in the room, huh? Dogs left in hotel/motel rooms frequently act up when left alone, and start to bark frantically and race through the room. Oh, and does the motel have any rules about leaving pets alone in the room unattended? Since this was Motel 6, I doubt it has any rules. With a dog going crazy in a room, there's a strong chance that when someone tried to enter the room and quiet it down, the dog escaped, or was allowed to escape. The occupant of a nearby room might have forced the door open and allowed the dog to escape. Lots to the story here that needs to be known.

Visduh: The scenario you sketch may well be accurate. I can only go with what she claims, although, historically, she has had problems in that department, as revealed by my previous posts on her. Best, Don Bauder

This is very odd story. Motel Six is nearly a mile, as the crow flies, from the I-5. The area a dog would need to traversed, the San Diego River bottom is dense overbrush, trees and homeless encampments. In addition the I-5, in that area, is elevated and protected by fencing.

Obviously, if the dog was hit on the I-8, it would be more plausible with proximity to the motel the nearby access ramps. I also find it hard to swallow, “...the dog let itself out” in the motel’s explanation. Typically doors to rooms at motel open inward, and have level type door handles. This means the dog would be jumping up with its legs, or it was really smart, grasping the handle with it’s mouth. In either case, it seems to a owner would have known of the dog’s ability to free itself from confinement.

As we know Prevost is not unsophisticated when it comes to the law. The GoFundMe account is more than likely a ploy to generate sympathy as well as money. However, the courts do have policies and procedures for “indigents” who can not “afford” fees so they too have access to legal processes. Prevost knows this. But, I’ll ask the obvious question, if you can afford to stay at a motel, with your large dog, why couldn’t you pay filing fees?

Using Prevost’s extensive history as a reference in past San Diego Reader stories I put absolutely nothing beyond her. Her past behavior indicates she is willing and able to do ANYTHING, including acts of violence. Veracity is certainly not one of her strengths.

To keep my post brief, something I seldom do, I made no mention of this all being a scam. But that's the most obvious answer.

Visduh: Prevost posted a photo of the dog with its severe injuries. She said she had to go out on the highway and take her dead dog off the road. Best, Don Bauder

JustWondering: Yes, several things stretch credulity, particularly that the dog "let itself out." Prevost claims the motel has footage of the dog running around near the motel, but won't let Prevost see it. Best, Don. Bauder

This is a conspired plot for the ages. UFOs, JFK, RFK, MLK, IranContra, trumps obvious russian collusion...they all pale in comparison to "Motel deep 6 the dog." Men wearing hazmat suits enter the room after watching the lawyer-woman leave. They muzzle the dog, inject sedatives, beat it mercilessly then close down a small segment of I-5, place the dog (still unconscious) in the road, open up I-5 and the oncoming vehicles finish the job. All of this to distract the public from Mayor Falconer's (yeah, I spell his name that way, what of it?) holding a birthday party for his twin nephews on the taxpayers' collective dime. With a bouncy house and everything (yes, a clown, magician, and a big cake) What proof do I possess? This is 2018 and even the president doesn't need facts. I say it, I will it....you believe. HAHAHAHAHAHAHAHA!

SaintJerry: The only thing I can do is recite lines from a great poem. These lines are not necessarily in order: "Things fall apart...the center cannot hold..the falcon cannot hear the falcconer." Best, Don Bauder

Saint Jerry...Trump's collusion/conspiracy with the Kremlin is more than a conspiracy theory...It is BASED ON FACTS: To Date: 20 Indictments, over 60+ Criminal Charges, 5+ guilty pleas, plea bargains, 1 lawyer (son in law of Russian Oligarch tied to Putin) went to prison, Trump's former campaign manager bailed revoked and jailed for witness tampering, Trump's Defense lawyers have discussed Pardons for Trump and others (A Pardon is an Admission of Guilt according to US Supreme Court Cases), And Trump's Defense lawyers have also openly discussed Trump TAKING THE 5TH AMENDENT IF MUELLER TRIES TO INTERVIEW TRUMP?! These are not the actions and strategies of an innocent man and the facts already known prove that there is a substantial amount of BEEF to the RussiaGate investigation and charges.. Just last week it was revealed that the Government of Spain turned over wiretaps and video tapes of Trump Jr. meeting with Russian Oligarchs connected to Putin...to Mueller and his team..Yet another questionable meeting by the Trump Family and officials with Russian Oligarchs connected to Putin that was not disclosed/forgotten....Until they found out Mueller had the goods on Jr and the meetings. Conspiracy theories are theories not backed up up by the facts. There is plenty of evidence that the Trump family and others connected to the Trump campaign intended to conspire illegally with the Russians to hurt Hillary and to help Trump. Mueller will let us know how high up the conspiracy went...whether Pres Trump was directly involved or not...Trump's speeches, tweets and actions encouraging the Russians to hurt Hillary and help him are very damning...Let's see what Mueller says..

concernedcitizen77: Truump is hurting himself with those tweets, at least among intelligent people. Innocent people don't talk the way he is talking and tweeting. I did not know about the Spanish government turning over material on Trump Jr.

What I fear is we have spent all this time investigating this matter, while the White House and Republicans deny everything. So nothing has been done to prevent this in the 2018 election, and perhaps 2020. Best, Don Bauder

Motel 6, how lovely. It that and little R&R staycation? Or is she homeless now?

Ponzi: Some have suggested to me that she is now homeless. But I do not know that. Best, Don Bauder

Mike Murphy: I have no information that would indicate she is now clerking in a lawyer's office. Best, Don Bauder

A German Shepherd needs a lot of yard space. Hate to think she killed her own dog and is trying to make it look like an accident but the woman is crazy, still, obvi. Didn't she stab a boyfriend or a female rival?

shirleyberan: I was trying not to retell that story, which is NOT an urban legend. When she was in college, she dressed up as a delivery boy and knocked at the door of her ex-boyfriend. The ex's new girlfriend opened the door and Prevost attempted to stab her. The old boyfriend chased her and found that it was she, not a delivery boy. This has been widely reported, including in this column.

However, I must quickly add this. By all accounts she was a bulldog lawyer. She was often quoted on TV. It's unfortunate that she got into so much trouble with clients. Best, Don Bauder

She should have never been allowed to become a lawyer with such a history of violence. Intelligent or not, her history was concealed or ignored by those who process bar applications. It’s not surprising she ended up disbarred. What a waste of a life. But if statistic are an indicator she probably has participated in many more incident of a similar nature than she has been caught doing. This latest caper at Motel Six is just another example.

I am surprised all of her defenders from the previous stories you’ve published in the San Diego Reader are no where to be found. They sure were vocal then, just wondering what changed?

JustWondering: I suspected back then that her defenders were, in fact, Prevost posting under a pseudonym. That was just a suspicion. Best, Don Bauder

This woman is TROUBLE!!!

concerned77: That is certainly the opinion of the California State Bar and some of her clients. Best, Don Bauder