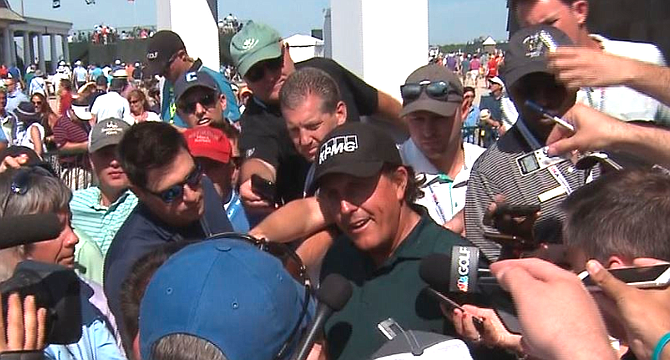 A putt rolled past the hole and was going downhill. Mickelson jogged after the ball and hit it while it was moving — a grave sin in golf. Ultimately, he got the ball in the hole, but had to take a two-stroke penalty for hitting a moving ball, He ended up with a ten on the hole.

That put him well out of contention on his 48th birthday. An announcer for Fox said Mickelson “snapped.” The golf world was stunned.

The controversy behind Maïmouna Doucouré’s Cuties

Netflix is guilty of many things, but pandering to child molesters is not one of them.
Next Article

A putt rolled past the hole and was going downhill. Mickelson jogged after the ball and hit it while it was moving — a grave sin in golf. Ultimately, he got the ball in the hole, but had to take a two-stroke penalty for hitting a moving ball, He ended up with a ten on the hole.

That put him well out of contention on his 48th birthday. An announcer for Fox said Mickelson “snapped.” The golf world was stunned.

Margaret Fuller: wrote first major work of feminism in the US

An inspiration on Walt Whitman
Next Article

Fiery and Not at All Peaceful

Could it be that his mind is on anything other than golf? He's not been a paragon of stability in a long time. Snapped? Yes, I guess you could say that.

Visduh: Afterward, he claimed that he did it deliberately, figuring that the ball would roll all the way down the hill and he might be better off taking the two-stroke penalty. Mickelson is known as a big gambler. Maybe he was gambling that the media and the fans would believe this explanation. However, he was smiling right after the stunt, so many may believe his tale. Best, Don Bauder

don bauder, So exactly why do you think he did it and did you actually see it as it happened?

danfogel: I only saw videos of the event. He was smiling afterward. I doubt his explanation that he felt he was sacrificing the two strokes because if the ball rolled down the hill his score would have been worse. I think it was a case of an old pro who loves to play to the audience, knowing he couldn't win, and not needing the money, providing some entertainment. Would he have been surrounded by fans and media right after his round if he had not pulled such a stunt? Best, Don Bauder

If he was smiling, it was because he knew that he couldn't win and decided to do some grandstanding. Good for entertainment I suppose.

Visduh: It may have been grandstanding that was actuated by frustration bordering on a meltdown. It was not one of his better days.

However, Mickelson, like all athletes, is an entertainer. He gets big bucks from TV ads. He is constantly playing to the gallery.

When I said, "like all athletes," this raises a point. Is golf a sport? Sure, it requires athleticism, but can you compare golf to football or basketball, which are clearly sports? I remember one fairly good golfer of yore, a former quarterback for the University of Illinois, who said that golf was not a sport. Next question: how about shootin' pool or snooker. Are they sports? Best, Don Bauder

Pool is a hustle game, not a sport.

dwbat: It is a. hustle game in pool halls, but what about all those homes having pool tables in their rec rooms? Best, Don Bauder

We have been discussing professional "sports" here, not home recreation.

dwbat: I didn't know the discussion was limited to professional sports. New question: Is a pool game in which money does not change hands a "sport?" Best, Don Bauder

Visduh: Hockey not a sport? I have never cared much about the sport, but on occasions when the TV was covering a hockey game, I marveled at the athletes' speed and agility on skates. Best, Don Bauder

I was mentioning comments from Ted Leitner from twenty or thirty years ago. Not my opinions necessarily; if pro hockey has cleaned up its act, it may even meet his definition of a sport.

Visduh: I have always wondered about hockey referees letting the players go on and on with a fight. I am told that is no longer true. Best, Don Bauder

Mike Murphy: I don't know of any dangerous drug used or touted on TV by Mickelson. Best, Don Bauder

one of many not too long ago

Enbrel has documented serious side effects. But celeb endorsers rarely care about that stuff. They take the big money and run.

dwbat: Those athletes who are multi-millionaires have to protect themselves. Best, Don Bauder

Murphyjunk: I would guess that celebrities plugging products in ads have words in their contracts indicating that they have no liability if the product is found to be dangerous.

maybe his wife needs to give him the same good luck as Arnold Palmer's wife. that might reduce his frustration .

That might not work for Mickelson, as his wife carries his around in her purse.

Murphyjunk: I guess I won't be in trouble telling that story. Golfer Arnold Palmer and his wife were on the Johnny Carson show. Palmer's wife said that, to give her husband support, she kissed his balls before a tournament. Carson shot back, "Does that make his putter stand up?" She sued and I don't know what happened.

I think I have that story right. I didn't watch the show; just read about the incident. Best, Don Bauder

don bauder Urban legend. Never happened. Years ago, a review of the tonight Show archives confirms that it never happened, as Winnie Palmer was never a guest. Arnold Palmer himself said it never happened during an appearance on Leno. I believe it was October of 1994, Episode #3.182

Right, it's not true. It's always best to check snopes.com, when these urban legends come up. The problem is that too many people pass on false stories, and they never bother to check the facts. Here's the link for this one: http://www.snopes.com/fact-check/balls-up-2/

danfogel: If it's an urban legend it has taken in some good journalists. I remember reading it in a couple of reliable sports columns. I always puzzled why she would sue and on what grounds she could possibly sue. Best, Don Bauder

danfogel: Oh yes, I have been taken -- several times.