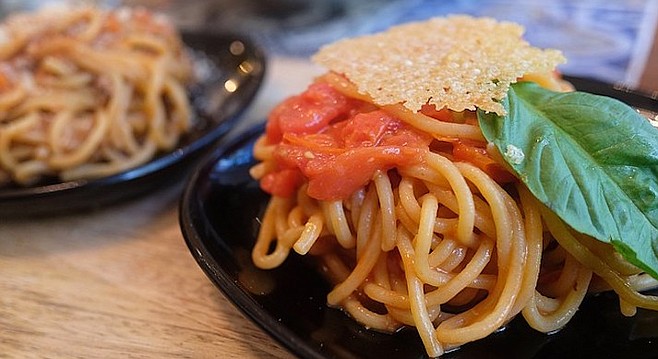 The case for fresh pasta

Back in the 18th and 19th centuries, Italian master chefs would hone their culinary arts in France, then return to cook for aristocratic households in Naples and Sicily, plying French techniques with Italian ingredients and tastes. In time, the French title they used, monsieur, became the italian honorific, monzu.

That’s the story behind Monzu Fresh Pasta, a new little restaurant in East Village. Monzu’s Italian owners are said to have studied with “master pasta makers” back home, where they learned “centuries-old pasta making techniques,” some likely traceable to those monzus of old. 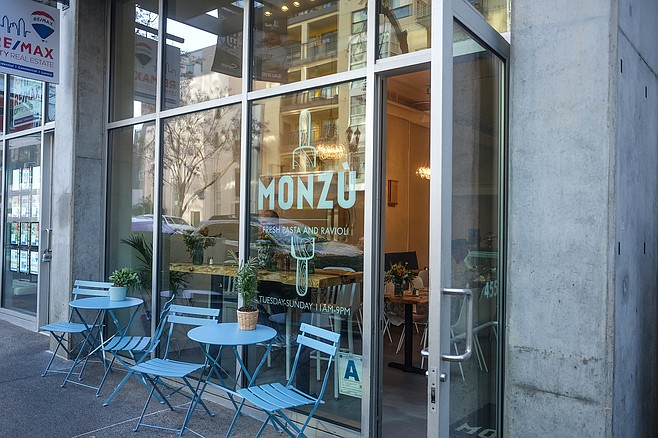 Simple, fresh pasta fare, served out of a simple storefront

Do not mistake those quotes for judgment. These fresh pastas are a pleasure to behold, and even more so to eat. You can get a good look at them — precooked — in a glass service counter in the back of Monzu’s casual yet refined dining room. Made with organic durum wheat flour, pasta varieties include raviolis that seem to rotate in both shape and filling; noodle standards linguini and spaghetti; and specialties such as tagliatelle (wider than linguini) and pici (thicker than spaghetti).

In addition to pasta made with or without local, pasture-raised eggs, you’ll find green pasta shapes (the dough blended with spinach) and reddish-orange ones (with chili peppers).

You’ll find rotating chalkboard menu of pasta entrees, including both meat and vegan lasagnas, and a handful of sauces you may mix and match with pasta shapes, including those stuffed with meat, cheese, and/or herbs.

Most run between 9 and 14 bucks, and I’m here to tell you it can be tough to choose between creamy sage sauces, the pesto of the day, and typically a couple of vegan options. Fortunately for me, you may split your entrée in two: half of your pasta with one sauce, the other half with another.

Thus, for $13 I got a small serving of scarpariello, and didn’t have to fill up without also trying the Bolognese. The scarpariello was a pretty simple sauce of crushed cherry tomatoes, olive oil, and a large green basil leaf, garnished with a crispy wafer of parmigiano reggiano cheese.

In both cases, the simplicity of the sauce and the quality of ingredients lived up to the elegant standards of classic Italian cuisine, and in both cases, the pasta was the star of the show.

Hearty and toothsome, these were some of the best textured noodles I’ve eaten. I’d been unable to resist the lure of chili spaghetti, and though the spicy just barely registered, I immediately asked the server whether fresh pasta could be bought to take home. Good news: it can.