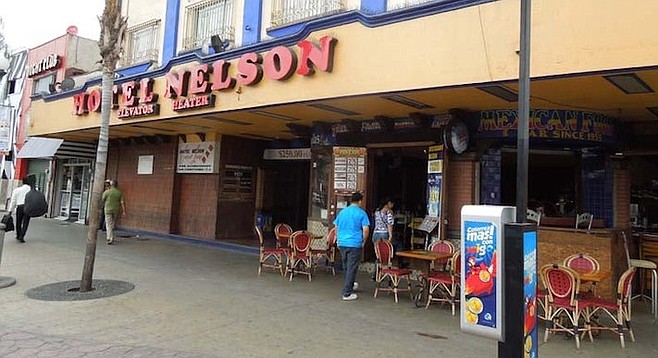 Afternoon at the Nelson Bar

Rantings of an ex-pat

I met a 62-year-old man at Nelson Bar in Tijuana today. He said, “I like talking to white people, you white?”

Sort of, I responded.

“You look white! I know everything. Ask me anything. No. You don’t want to know everything like I do. You know women are taking over the world? They think like men. They work. They invest. What is wrong with them? They are women! Not men!”

That’s fine with me.

I don’t know, dude. I am just a human of the human race. We are all just human.

He was pointing north towards the United States.

Yeah man. I get it. I just got back from there.

“The women are crazy. They work! They think like men now. They want to buy their own things. Why? That’s what men are for! To buy them things! You know I love women. Women love me. Women are great. I had women from all over the world. You know when I was living in ‘koo-e-toh’ I had two girlfriends. Cousins. Both short.”

“No! That’s how they say it! I say it the right way. The white man way! Koo-e-toh! I had two girlfriends in Koo-e-toh! They were sisters. No. Cousins. Both short. Then the cousin had this guy come from Argentina. It was her boyfriend. But not really. He was very young. But they were my women! That lasted like six months!”

We raised our glasses of Tecate beer poured from our own caguamas. He stretched his hand and told me his name was John. I hesitated and decided to lie and said my name was Charlie. It was obvious that I lied, but John was drunk and didn’t seem to care.

I work for an alt-weekly, like a newspaper. This, I pointed at my Reader shirt. I was coming back from doing photo work. The Nelson Bar is my pit stop before heading back home to edit.

“Reporter! You’re smart! The internet is everything now. I hate it. Machines. They are doing everything. You know, I used to go to the horse races. It was just men. Men watching men race horses. Beers were $1. Not anymore. Now women go to races and they gamble. And no more people. People used to work. Now you just go to a machine and beep boop, money, ticket. You know? I like roulette. I go to the Caliente and play roulette. I have 15,000 peesos. I play roulette and win peesos. And I don’t take it out of the casino. No. Then I spend it. No. I have a tab there. It has 60,000 peesos. So I go and order a beer and they know me and my account with peesos. So I get a beer and play roulette.”

“You’re smart. I am smart. I know everything. Hey. Thanks for being such a cool black guy, you are cool.”

He suddenly directed his attention to Jude the barback from Haiti who doesn’t speak English (just a bit of Spanish).

“What? No. What? Why? French? Hey! Thanks for being a cool black guy!! I don’t think he hears me.... you know I am rich? I married a rich Mexican lady. Really short. And I used to play with the stock market. So I am I kept responding with no interest, still, he kept talking.

“You know, it’s the same thing having no money than having a lot of money!”

“It’s the same thing! If you have money, you have to be a dick and say no, you can’t have my money! So no one likes you, because they want your money. And if you have no money, no one likes you either. But you sleep on the streets, I could never live on the street. I stay in Hotel San Francisco. I could get a nicer one because I am rich. But I like it. Except for cops. Police... Cops. They rob me because they know I am rich. But if you are really rich, you wouldn’t be in a place like this, so I am not that rich. I am about to turn 63. That’s why I am here. 'Cause I have to go get my pension. You know. I owned a lot of business. And played with the stock market. Lived all over the planet. And I know everything. I just don’t like going over there.”

So who was the author of this pithy little piece?

Seems like the author was trying to paint the picture of this old white man being a crazy, uneducated, intolerant, bigot, but also ending up demonstrating his own bigotry by saying he's fine with "no more white people".

If the picture painted of this old white man is correct then he is in the wrong town if he wants to hang with white people.

When I go to grocery stores around here I try not to make eye-contact when I know someone has seen me coming through the parking lot, as they might ask for money if I see them. There's too many.