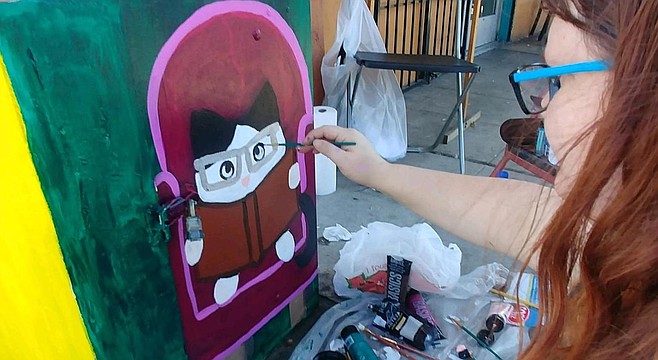 On July 14, about 20 utility boxes were painted along Adams Avenue in Normal Heights. 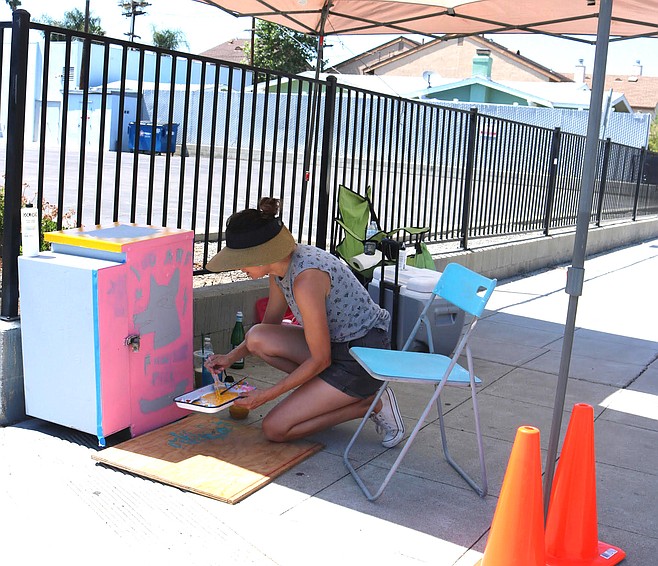 Janine Wareham at 34th and Adams: “I’m trying to paint a bunch of positive messages for the community,”

“Each of the 16 artists, was assigned a box and given anywhere from $125 to $675,” said Selena from the Normal Heights Urban Arts organization, “depending on size of the box; small, medium, large and x-large.” 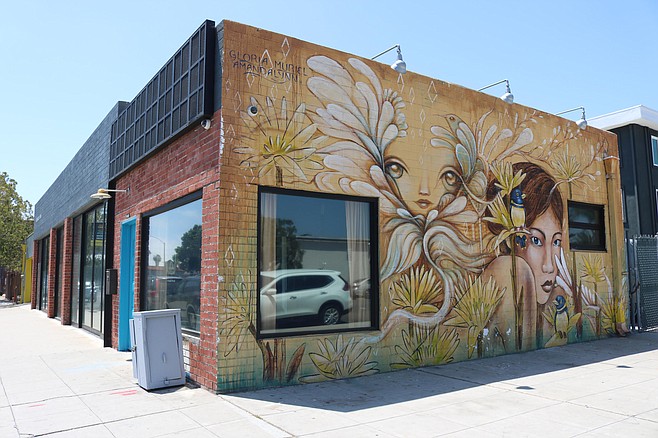 Cristopher Konrad: “Something that might have fish on it won’t work with our theme here.”

Her organization collaborated with the Normal Heights Community Development Corporation and Adams Avenue Business Association— to bring the utility-box project to fruition. 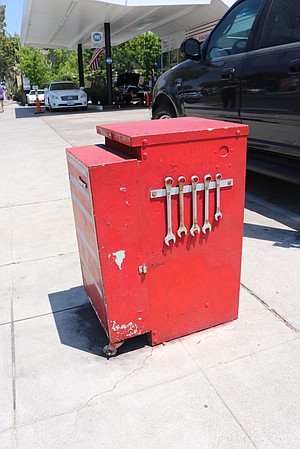 Mike Majors: “My box is about due for a refresher."

At 2:30 that Saturday, I found Janine Wareham painting the box on the north side corner of 34th and Adams, across the street from Rosie O’Grady’s in the historic Wilkinson Building.

“I’m trying to paint a bunch of positive messages for the community,” she said, “this side’s going to say “You are magical.” 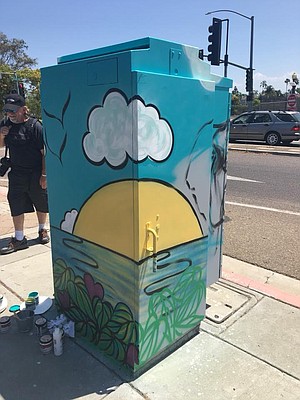 One box by the I-15 depicted sunset-meets-ocean.

Wareham is a 40-year-old designer (illustrator and letterer) who’s been painting her whole life. This afternoon, her husband came by and popped up a canopy to shield Wareham and her four-foot utility box from the sun. “The paints globbing up and I have to dilute it a bit,” she said. “I’m painting a cat on top meowing to the people, a dog, and a snake on the side.” 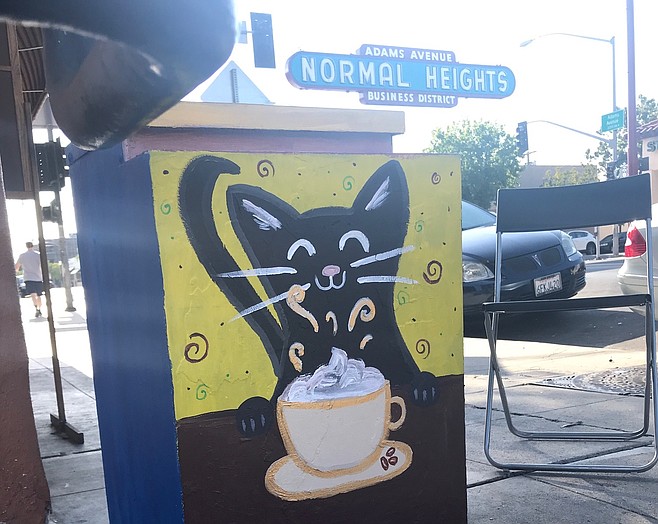 Bryndan Badel: “The characters are based off of the cats in my life."

A couple of blocks to the east of Wareham, a box remained in grey primer and didn’t get painted.

“Something that might have fish on it won’t work with our theme here,” said Cristopher Konrad, the CEO of the Konrad+King design studio on the corner of Hawley and Adams.

“I see their point,” Wareham said, “they wanted something edgy and cool.”

I opened Konrad’s blue door, which sits about ten feet from the utility box, to scope out the theme of his waiting room. To the right there’s a 1970s rock-n-roll montage of photos and concert posters; up top hangs a large vintage chandelier; in the middle of the room sits four mid-century lounge chairs that surround a guitar-amplifier converted into a coffee table; towards the back wall was a fully stocked bar; and to the left sat a low chestnut brown cabinet that housed a record player.

“I just assigned a graphic artist to do a vinyl wrap for them,” said Scott Kessler of the Adams Avenue Business Association, “they have a coffee table that’s a Marshall amp and they are paying for the artist to wrap their box with the same design as the guitar-amp.

(Kessler helped with the beautifying of 15 utility boxes in Logan Heights on the same weekend.)

“I love this program,” said Mike Majors, “my box is about due for a refresher, with STP motor oil stickers.”

Majors is the owner of Smitty’s Servicewhich is kitty-corner to Konrad’s studio. The 70-year-old auto garage already has a custom utility box that Majors painted red ten years ago; he hard-mounted wrenches and a Snap-on plaque on the facade.

In June, artists were requested to send in their qualifications which included a minimum of three photos of their work (previously painted murals and utility boxes) and conceptual drawings for their prospective Adams Avenue utility boxes. Selena and other members from her organization selected the 16 artists.

One box by the I-15 southbound freeway entrance, depicted a sunset-meets-ocean design; when I drove by, another box was in its early stages portraying a surfer.

“The characters are based off of the cats in my life,” said Bryndan Bedel, the artist who decorated the box with acrylic paints a few feet away from the Normal Heights sign.

But not every applicant was selected to paint one the 22 primered boxes between the I-15 and I-805 overpasses.

One artist who was declined reached out on the urban-arts Facebook page and offered to paint a utility box for free; another artist bypassed the selection process and “art bombed” a box close to Ward Canyon Neighborhood Park that wasn’t on the masterplan.

“I’ve been working in the creative industry for a long time,” Wareham said, “so I put together a pretty tidy presentation which includes my artwork and my website.”

“Maybe that helps especially in this day and age where there’s a lot of competition and everyone’s ‘insta-famous.’”

Wareham was paid $125 for the painting of her box.