The servants of a Master

The credentials of that revelation should be tested

Our Saviour astonished the people because, instead of being lost in the mazes of arbitrary and vicious excrescences that darkened the face of religion, he taught them with authority and not as the scribes. Taught them with authority, that is to say, with the title to command and with the force of command. If God has given us a revelation of his will, whether in the laws of our nature or in a kingdom of grace, that revelation not only illuminates but binds. Like the credentials of an earthly ambassador, it is just and necessary that the credentials of that revelation should be tested. But if it be found genuine, if we have proofs of its being genuine equal to those of which, in the ordinary concerns of life, reason acknowledges the obligatory character, then we find ourselves to be not independent beings engaged in an optional inquiry but the servants of a Master, the pupils of a Teacher, the children of a Father, and each of us already bound with the bonds which those relations imply. Then head and knee must bow before the Eternal, and the Divine will must be embraced and followed by man with all his heart, with all his mind, with all his soul, and with all his strength.

– from The Impregnable Rock of Holy Scripture by William Ewart Gladstone. 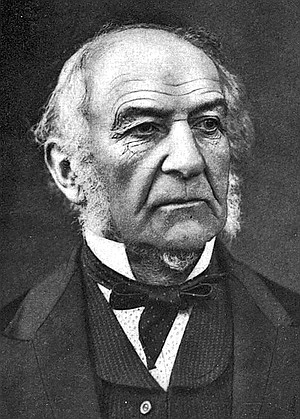 William Ewart Gladstone (1809-1898) was a British politician who served as Prime Minister of England for twelve years of his sixty-year career in English Parliament. As a politician and a scholar, he had a strong interest in exploring the relationship between church and state. In his first book, The State in its Relations with the Church, published in 1838, he asserts that the state should be subservient to the church—in particular, the Church of England.