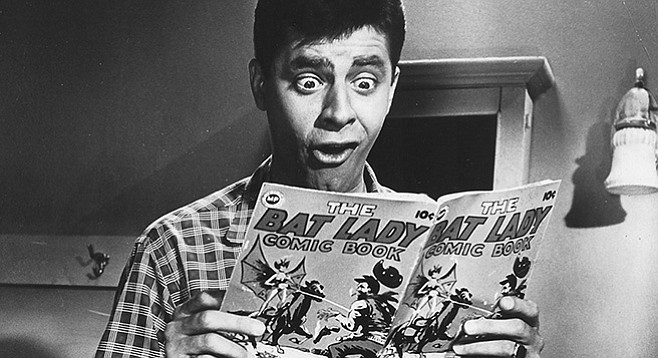 The annual celebration of everything that’s wrong with contemporary cinema is upon us. Here are three satires about comic book artists to act as antidote, all available on Amazon Prime.

Was it the Bat Lady or the fat lady? If I’m allowed to take ten films on the road to hell, line my coffin with five Tashlins and five Bunuels. While at Termite Terrace, Frank Tashlin played proud papa to Porky and Bugs before moving on to Paramount where he oversaw such live-action anomalies and curiosities of cinema as Bob Hope and Jerry Lewis. This sparkling cinematoon stars Dean Martin as a starving artist who finds his inspiration in a cretinous roommate and pally (Jerry Who Else?) whose night terrors reveal not only the stuff great comic books are made of, they inexplicably divulge top secret government plans. Lewis found his perfect squash-and-stretch female foil in the form of a pixie-cut Shirley MacLaine. The economical staging of the musical numbers — particularly Dino’s celebratory “Luck Song” — is a delight to behold. Tashlin’s playful satiric assault on the 50s comic book culture is the logical precursor to what would be the first rock ‘n’ roll feature, The Girl Can’t Help It!.

Michael Caine stars as Jonathan Lansdale, a celebrated comic strip artist who loses his hand while tooling through the countryside with his wife (Andrea Marcovicci) behind the wheel. She had earlier advised her hubby to sell out and not worry about what direction his strip took so long as it guaranteed a secure income. After a brief recuperatory spell, the hand takes on a murderous life of its own. Oliver Stone’s second feature was his big breakout picture. Talk about biting the hand that feeds you: Caine later confessed that it was a “paycheck picture,” made so that he could secure enough money for a down payment on a garage. There’s much to admire — most notably the dismembered hand acting as a marital aid — before it veers off the rails into slasher-movie territory. The oddball supporting cast includes Viveca Lindors, Rosemary Murphy, Charles Fleischer, and Stone himself as the first to be pawed.

How to Murder Your Wife

Frothy 60s sex satire, written and produced by George Axelrod (Breakfast at Tiffany’s) and directed by Blake Edwards’ frequent collaborator Richard Quine (It Happened to Jane). This time, it’s Jack Lemmon wielding the pen as a newspaper cartoonist (and confirmed bachelor) who gets snockered at a friend’s stag party only to wake up married to the exotic dancer (Virna Lisi) who popped out of the cake. Famed for his use of still photographs — taken by his loyal butler (played by Terry-Thomas) — to storyboard his panels, Lemmon’s plans to kill off the wife of his pen-and-ink alter-ego Bash Brannigan, Secret Agent are misinterpreted by his bride as a plot to do her in. The film really comes to life when cinematographer Harry Stradling is allowed to move his camera out of the studio and onto the sidewalks of Manhattan. This is one of the few times Stan Ross appeared on screen without uttering the three words that made him famous: “I’m with you!”