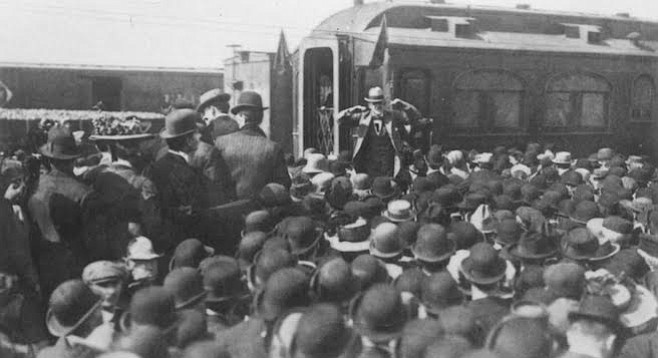 Spellbinding orator and labor leader Eugene Victor Debs became a socialist while jailed in the late 19th Century. He went on to become a presidential candidate five times in the 20th Century — the last time, in 1920, running from a prison cell (he had landed there for opposing World War I).

San Diego State University professor and artist-in-residence Yale Strom has directed a new documentary, American Socialist: The Life and Times of Eugene Victor Debs. The documentary has photos of Debs orating in San Diego and leaders of the Wobblies (Industrial Workers of the World) speaking for free speech at a rally. Debs had been a founder of the Wobblies, whose brutal treatment by the San Diego establishment in the early 20th Century is one of the disgraces of the city’s history.

Maybe this is a question for Scott Marks. Why is the Jewish Film Festival being held at these far-away movie theaters? The last time I went, it was at the Reading Clairemont 14. Maybe San Marcos has become the geographical center of our urban sprawl.

monaghan: I don't know the answer to that, and maybe Scott does. Best, Don Bauder