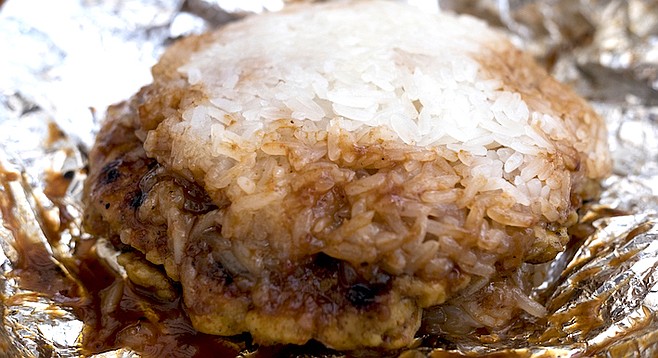 It's not about the bun

We stopped first at K Sandwiches, which has reopened two years after being destroyed by fire. I'm not sure whether class had just let out at nearby Mesa College, or whether people have been seriously jonesing for that bánh mì, but either way we found every seat taken, and a line out the door. 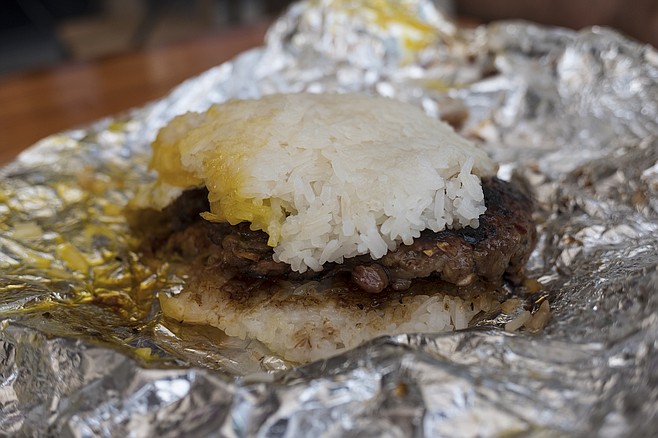 So we started poking around for a plan B, and found Thai Burger Company only a couple blocks away. It's a tiny spot, merely a counter and small patio — a permanent location built up from a food truck and market stand. Like many a food truck business, this one operates with a street food twist: its ground meat burgers are inspired by classic Thai dishes, and instead of a bun, the patties are served between two slabs of sticky rice. 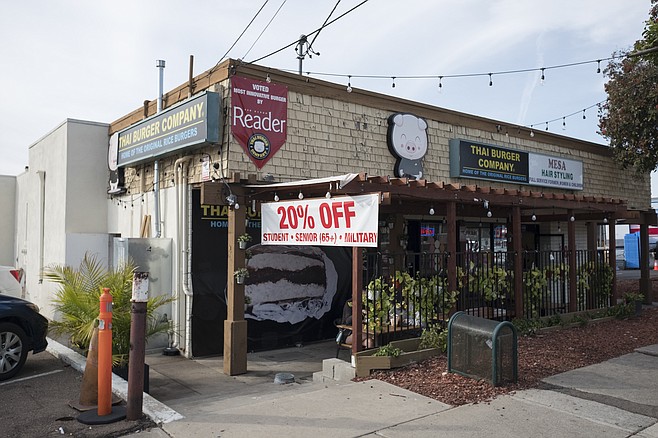 As a banner strung up in front of the restaurant points out, these Thai inspired burgers were a hit at the Reader Burgers & Beer fest. Seeing as I'd missed out on that one, I was happy enough to embrace the "most innovative" burger now.

At $7 apiece, most of these burger choices feature pork: either with Thai BBQ sauce, panang curry, or a fairly spicy ka prao — based on a dish made with basil and chili peppers, which recommends adding a fried egg for an extra buck. I tried my friend's order of the latter, and for myself checked out the chicken satay burger, which sounded delicious in a mildly spicy coconut curry and peanut sauce.

The rice is sticky enough to hold itself together, and for the most part it did. However, these burgers are served wrapped in a foil paper, like old fast food burgers, and some of the rice wants to stick to the wrapper, which threatens the whole "burger bun" cohesion. A bigger problem I had with mine was that the sauces flavoring my chicken burger seeped into the rice, both threatening its integrity and making it a sloppy mess to eat.

To be fair, some of my favorite burgers are sloppy messes, so I can cope. But then, the burger experience can't be adequately replicated with a fork and knife. Here, each bite of Thai burger tasted the same as it would out of a rice bowl or plate. The flavors were good, but I'd enjoy them just as well served in a bowl with some veggies, so I don't get the point in making a hand held version, without even lettuce for texture. For szeven dollars, sticky rice packed around a few ounces of grilled ground meat doesn't seem like a value added proposition. Especially when people are lining up down the block for $4 bánh mì topped with pickles and served on fresh-from-the-oven baguettes.