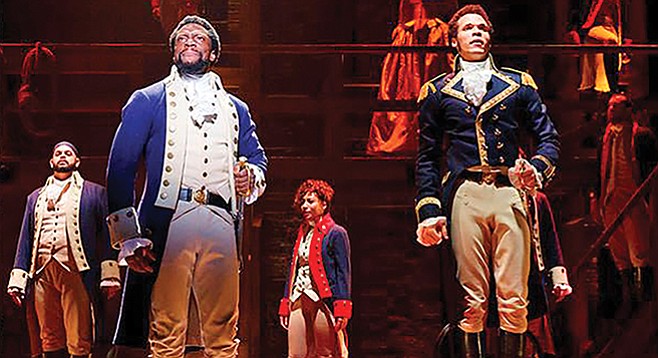 It’s true what they say about Hamilton

Art can alter life, literally. In 2015, the Treasury Department planned to take Alexander Hamilton’s portrait off the ten-dollar bill. The indefatigable Founding Father was too controversial (he came close to advocating dictatorship and a “president for life”). Lin-Manuel Miranda’s Hamilton opened on Broadway August 20, 2015, and won 11 Tony Awards and the Pulitzer Prize. The musical became such a cultural force, the Treasury changed its mind: keep Hamilton on the 10 and put Harriet Tubman, legendary member of the Underground Railroad, on the 20-dollar bill.

Hamilton is at the Civic through January 28, and…wow!

During intermission I heard people saying they preferred actor X in the New York production over Y. Could be true. Having no basis for comparison, other than American musical theater in general, I have never seen a show with such blazing, curtain-to-curtain theatricality and that packed in more information. Or, for that matter, of that size and scope with such detail. They say Truman Capote’s last words were about writing: he wanted it to be “faster and deeper.” Tru, meet Hamilton, the Musical.

In 1854, Alexander Hamilton’s then–97-year-old wife, Eliza, felt that history never gave him a fair shake. After all, he was a Founding Father, wrote 51 of the 85 Federalist Papers, was Secretary of the Treasury, advocated a national bank, a professional army, etc. Yet those who wrote about America’s beginnings shunted him off to the side. “Justice shall be done to the memory of my Hamilton,” Eliza told one and all. What was needed was to change who told the story.

Ron Chernow’s biography, Alexander Hamilton (2004) and Lin-Manuel Miranda’s musical took control of the narrative. Even the telling’s brand new. The cast wears late-18th-, early-19th-century outfits, with suggestions of contemporary apparel. Instead of traditional “How do you solve a problem like Maria?” Great American Songbook tunes, they sing hip-hop and rap, R&B and jazz — and everything rhymes! They dance split-second steps as one, with such precision they would have freaked out the characters they’re playing. And not just the dancing. Most of the cast are non-white: Thomas Jefferson, for example, is a black man with a basketball-sized afro, a florid violet tailcoat, knee-length breeches, and an impish need to meddle. He also owns slaves.

The originals might want to know where these African-Americans and Latinos came from. One even wonders if they’d approve. After all, this isn’t melodramatic, heroic-dudes-versus-evil-foes history: it’s an honest, flaws-and-all look at the painful, often clumsy birth of America.

Franklin Delano Roosevelt once began a speech with “Welcome, fellow immigrants.” Hamilton opens with a musical bio. He was “a bastard orphan son of a whore and a Scotsman,” who grew up in the Caribbean (first Nevis, then St. Croix). Banging into walls at every turn, he dug in, taught himself, and immigrated to the American colonies, where the promise of freedom beckoned. He could be the model immigrant, rising from less-than-humble beginnings to greatness (“It’s my chance to socially advance”).

Or would he? “We’ll never be truly free,” he sings, “until those in bondage have the same rights as you and me.” These lines come from “My Shot (Rise Up Remix).” As so often happens in the musical, one watches a black man singing as Hamilton. But at the same time it could be Hamilton singing as a black man today (as in “When even role models tell us we’re born to be felons”). The lyrics cut both ways — to then and now.

“My Shot” builds on its own aspirations. It also does something else: several times it approaches a stock, showbiz resolution. The audience prepares to applaud. But then it sidesteps the cliché and leaps to another level. It’s as if the song says, “Think we’re done? Come on, we’re just getting started.”

“My Shot” drips with irony since Aaron Burr’s one pistol shot will end Hamilton’s life at age 49.

Hamilton has so many stage pictures it’s hard to pick one or two out. They coalesce into an image of constant, kaleidoscopic movement. But the eye, thanks to Thomas Kail’s direction, always knows where to focus. And scenes present original ways to treat potentially dull subjects. How, for example, should one stage debates between Hamilton and Washington (“Cabinet Battle #1”) and Hamilton and Jefferson (“Cabinet Battle #2”)? Why not give them microphones for a spoken word/“rap battle”? These can-you-top-this word-wars give the material a passionate urgency to match the originals.

The scenes about George Washington and the Revolutionary War unmask the traditional view where destiny dominates. The outcome is in grave doubt. The harried general has one-third the troops promised, and they’re just gaggles of rag-tag volunteers. Hamilton shows that the outcome could have been otherwise.

X in New York may have been better than Y in San Diego, but Y was good enough for me. Led by Austin Scott (Hamilton), Ryan Vasquez (the passive-aggressive Aaron Burr), Raven Thomas (Eliza Hamilton), and Rory O’Malley (daffy King George III, who promises to “send a fully armed battalion to remind you of my love”), every cast member communicated the thrill of doing Hamilton, which may have occupied the first three choices on their bucket lists.

In one sense, opening night resembled a rock concert. As the lights dimmed, people hooted and hollered, whistled and screamed with excitement. At the time I thought, Can’t you wait to see what they do? Now I’m convinced that, if I ever get to see this wonderful musical again, I’ll join the chorus of curtain-raisers.