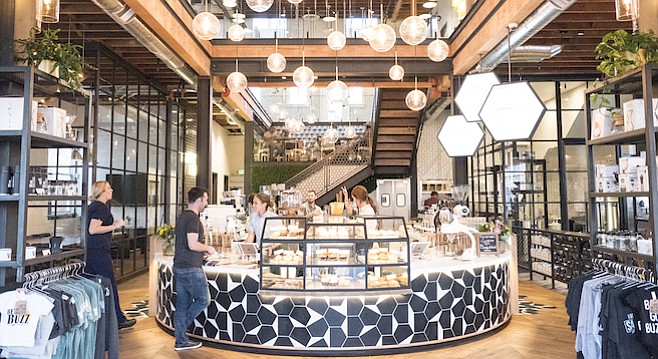 This way to a Better Buzz

Better Buzz Coffee is on the move. The Vista coffee roaster has opened its eighth coffee shop in San Diego, its fourth in just over two years. However, while most Better Buzz shops have been relatively small in scope, the newly opened Hillcrest location is large enough that it will become the growing company's new headquarters.

The 7500-square-foot building at 801 University Avenue has been stylishly furnished with a full-service coffee bar and expanded food menu, in addition to multilevel seating and a private, enclosed meeting space that will be available to rent. Better Buzz management is, for the most part, moving into offices lining the top floor of the building.

While primary roasting operations will remain in Vista, the new property will feature supplemental roasting on site. A glassed-in room in the back of the shop features a century-old Probat roaster shipped over from Germany, and director of coffee production Daniel Greig says it will be used to roast small batches of specialty coffee, including the eventual introduction of the rare and highly sought geisha coffee beans to the Better Buzz brand.

Since opening an Encinitas shop in 2015, Better Buzz has also opened a second Pacific Beach café (with a 12-car drive-thru), and upgraded from its kiosk at Fashion Valley mall into a full storefront (next to Urban Outfitters). It also maintains is original drive-thru shop in Pacific Beach, as well as others in Mission Beach, Point Loma, and San Marcos.

Like the Encinitas café, the Hillcrest shop features a "Purist" bar devoted to making all single-origin espresso drinks. Hillcrest will be the first of the bunch to offer single-cup brews made with automated Seraphim pour over devices. In addition to coffee, the shop offers tea, matcha lattes, and has introduced a coffee-free "turmeric latte," which pairs the antioxidant-rich herb with cinnamon, ginger, honey and coconut milk.

While Better Buzz is one of the few coffee businesses outside Starbucks to operate drive-thru services in San Diego, the new Hillcrest location does not. However, a half-mile west, another new coffee shop has opened to car traffic. Copper Top Coffee and Donuts took over the small building that previously played home to Wienerschnitzel at Washington Street and First Avenue (101 Washington Street, Hillcrest). While it's walk-up window and patio seating are visible from the street, a drive-thru lane at the back of the building offers expedient to-go service.

Josh McCorkle and partner Kent Beidel met more than a decade ago when they both worked at Zoka Coffee Roaster & Tea Co. in Seattle. "Up in Seattle, there's drive-thru coffee everywhere," says McCorkle. "I've been down here for six years and didn't see a lot of drive-thru coffee, so decided to give it a shot."

With the Seattle connection, they've opted to serve beans sourced from the area, from Rococo Coffee Roasting. Coffee's available in espresso drinks, cold brew, and batch brew, served alongside donuts that are cooked throughout the day to keep a fresh selection on hand.