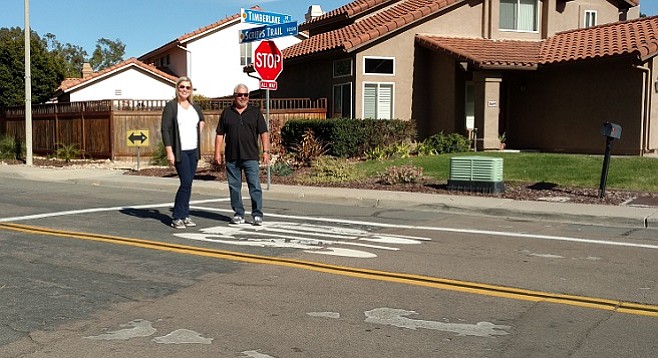 "When it rains, we'll have chunks of asphalt that come loose."

More than a decade deep in a battle with San Diego city government to get their deteriorating road repaved, residents along the northern stretch of Scripps Trail seem no closer to getting answers than when they began.

Claudia Walker's family bought a home on the 10400 block of the street, a quiet, neatly manicured tract in Scripps Ranch near where the northeastern edge of the city shares its border with Poway, in 2004. Upon meeting longtime residents, she says street repairs were one of the first things to come up. 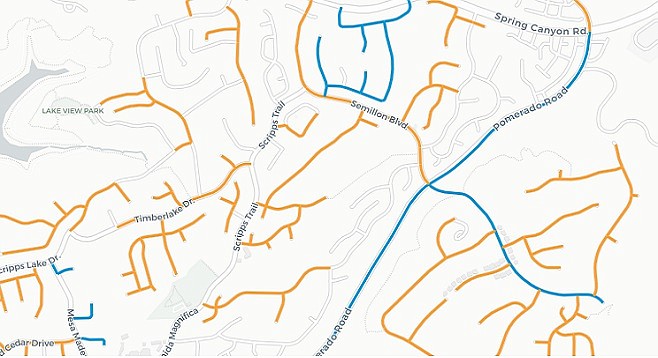 "Literally, the day we moved in they said, 'Hi, we're your neighbors — we've been trying to get the street repaved.' So that's what's been going on for 14 years," Walker recounts when we meet on the sidewalk outside her home. Though it's the middle of a weekday, traffic is steady, with a half-dozen cars and the occasional delivery truck rumbling past every minute. Most drivers barely tap their brakes to acknowledge the stop sign posted on the corner and blur of paint that vaguely resembles the word "stop" painted in the street.

The road itself is noticeably rougher than surrounding streets — many of which, according to the city's Streets Division website, have been repaired in recent years. Asphalt is cracking and peeling away in places, while tar patches cover other cracks in random cross-hatchings.

"When it rains, we'll have chunks of asphalt that come loose and wash out down the road," Walker continues. "We go out and pick them up and toss them in the trash can — we're literally throwing away our street."

After receiving an invitation to suggest neighborhood improvements from city councilmember Mark Kersey in late 2016, Walker sent the first in a series of emails complaining about the condition of Scripps Trail. When she didn't receive a response, she intensified her research.

"There was probably a four-month gap between the letters I sent and during that time I started doing research. I found that there's an Overlay Asphalt History Report; it goes all the way back to 1901, covering every street in the city of San Diego, and it's 1200 pages. It's not alphabetical either, it's by date. I kept going and going through maintenance records until I found it: June 1, 1981, the date the street was first put in.

"We have kids," Walker continues. "We’re about a mile away from the school, a park, the swim-and-racquet club — during the summertime and around school hours this street is heavily trafficked by kids on bikes, skateboards. There have been times they've hit a crack, crevice, what have you, and have gone flying, ended up with injuries."

Finally, after a third email she admits "definitely was by no means nice," Walker got in touch with Quinton Grounds, a Kersey staffer whom she says has been helpful in trying to translate her years-long complaint into action, including convincing San Diego Gas & Electric to re-route their heavy construction trucks away from the street. In response to an interview request, Grounds deferred to Anthony Santacroce, a senior public information officer with the city.

"It's on our radar and we are set to evaluate it for what kind of work needs to be done, but that's all I have — no time tables, work that's been committed to, design work in process, or anything like that," Santacroce begins before explaining the city's process for prioritizing road repairs and offering a theory as to why Scripps Trail may have been passed over when crews were repairing nearby side-streets.

"We're aware of that stretch of road and need to evaluate it because it might need more work than just an asphalt overlay or slurry seal," Santacroce continues. "You'll notice that a lot of the streets in the area have a good overall condition index, which is the national standard for grading roads. That leads me to believe that maybe the section in question maybe needs a new clay base, needs to be dug out, needs a reconstruction. This is just speculation from previous experience; again, we haven't evaluated the road to be sure of what needs to be done.

"That kind of work includes a longer design time; there are a lot of other factors that go into more serious work like this than a basic slurry seal or asphalt overlay."

Going block-by-block over a six-block stretch approaching Walker's home, Scripps Trail received overall condition-index ratings ratings ranging from 38 (poor) to 65 (fair) during a 2011 survey. By 2015, the latest year for which data is available, the ratings actually rose to a range of 59 to 89, despite no major repairs having taken place. The stretch in front of Walker's home currently garners a "good" rating of 81.

The time line, or lack thereof, laid out by Santacroce doesn't surprise Walker.

"The city has kept telling us, 'Oh, you're not on the docket for work,' and then, 'You know what, now it's so far gone that it's not just a simple re-slurry. We need to completely resurface and we don't have the money for that.'

"We're heavily trafficked — we've got trucks coming through, we get fire trucks because this is the quickest way to Pomerado…all of this is going on and the city hasn't touched the street in over 30 years?"

Walker says she's seen a list of proposed road repairs to take place in the city's fiscal year 2019, which begins this July. Scripps Trail, for the 38th straight year, does not make the cut.

I'd trade "Good Intentions" for a truck full of asphalt and a crew to repair Scripps Trail anytime!

Someone once told me that "if you build it you have to maintain it". The City of San Diego has always bent over backwards to accommodate developers but never seem to budget for the maintenance of the roads the developers "give" to the city.

Plenty of cash for ticket guarantees for sports owners, for builders and pet project, but no cash to fix our roads?! Disgraceful!!!

This is just typical in the city of SD. Neglect a street for decades until it is crumbling and needs a complete repaving job. Then decide that it doesn't have the priority for that kind of costly rework, and just do nothing. These people did "everything" to get the street taken care of, and did it for too long. But in SD, that happens all the time and everywhere.

What these folks lacked was some real political juice. Some influence over their city councilman/woman could have had it done years before. How does one get that kind of clout? I really don't know, but it exists, and explains many, many things that either happen or don't happen in the slobberin' city. Connections, connections, connections that they didn't have. And so they suffer along with a busy, broken down street. I repeat, typical San Diego.

Thanks to all who have commented on what I believe to be the street in the poorest condition in Scripps Ranch. Maybe Santa will bring Quinton, Kersey, and the Mayor a new pair of tap dance shoes for XMAS! Happy Holidays as we move toward the 40th year of no major road repair for Scripps Trail.