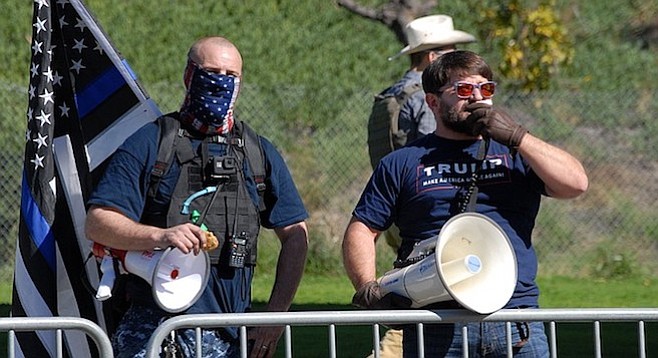 Bordertown Patriots, self-described as a group of American patriots, militia, and political activists, were among demonstrators at Chicano Park on February 3rd. 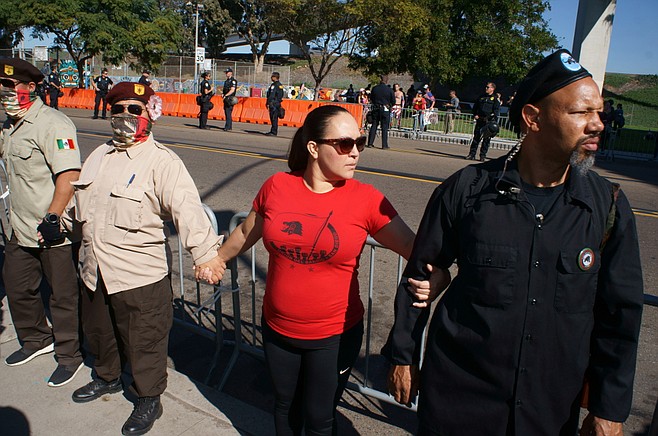 The “Patriot Picnic,” as organizers called the event, was a means to protest the lack of an American flag flying in the park sited under the Coronado bridge.

Through a press release, the organizers also stated that Chicano Park should be made more accessible to other races; this in response to a September 2017 incident where members of a similar group, Patriot Fire, were driven out of Chicano Park. 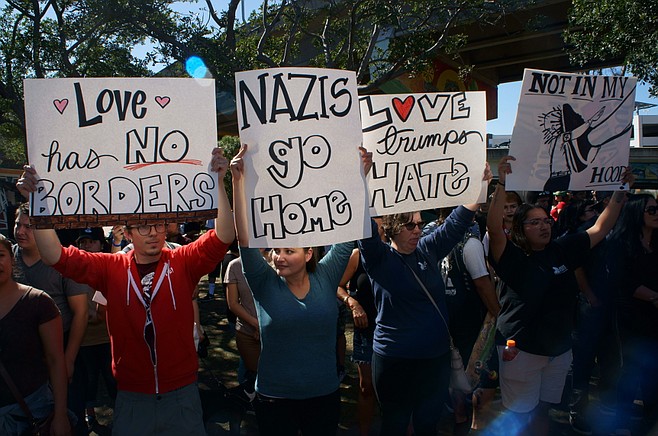 Reportedly, 700 counter-protesters gathered at the park on February 3rd prior to the arrival of the Bordertown Patriots group; the latter, composed of about 50 protesters, gathered near the San Diego Convention Center, made its way through Barrio Logan, arrived at Chicano Park at around 10:30 a.m., and were guided by police to the northern section of the park across Logan Avenue. There was a strong police presence along this avenue and the intersection of Cesar E. Chavez Parkway. The counter-protesters remained on the main section of Chicano Park south of Logan Avenue.

“People are here today united around the fact that white supremacists and so-called patriots are coming to this park because they think Chicano Park is anti-American,” explained Luna, a young activist handing out literature in support of an anti-fascist organization. “They would rather see this park not exist.” 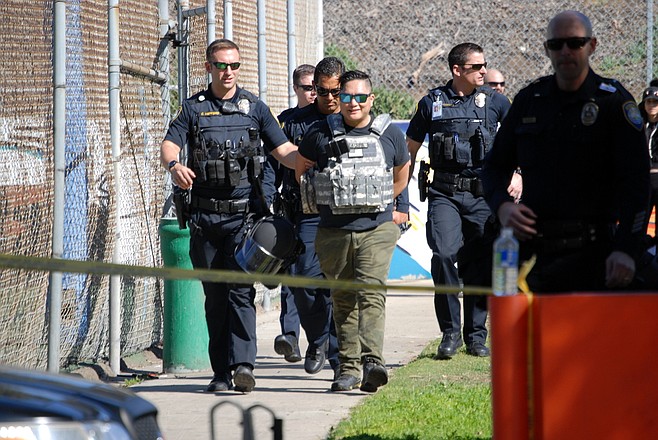 A handcuffed man was taken out of the Bordertown Patriots section of the Park for reasons not made clear.

A masked man walked out of the protesters area and had a calm discussion with several people. “It’s a beautiful area,” he answered when asked about Chicano Park. “It has tons of potential, but there are more pro-American values that should be pushed through.” Possibly referring to the first "Patriot Picnic" in September 2017, he restated that the community should be open to people of other races.

Three arrests were reported during the activity, according to the San Diego Police Department’s Twitter account. Police handcuffed a man inside the Bordertown Patriots section of the park and put him in a police car. When asked, a police officer stated that the individual had resisted arrest but did not give any details as to why he had been detained in the first place. 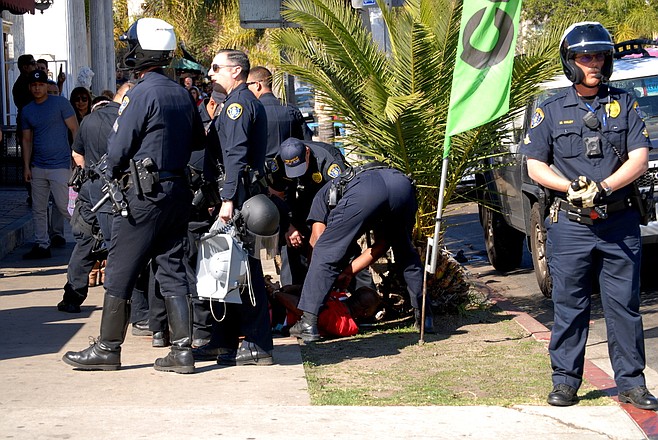 A man was taken down by several policemen.

Later that morning, another individual was wrestled to the ground by multiple police officers and taken away in a police car. A witness stated that he saw the man running away from the police officers stationed at the Cesar E. Chavez Parkway/Logan Avenue intersection, at which point he was quickly taken down. A subsequent report stated that a policeman had been punched in the face.

The third arrest reportedly involved a man in possession of a billy club. 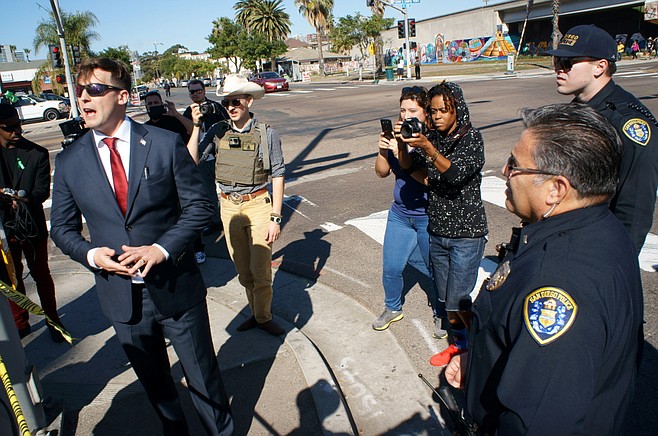 Protesters attempting to enter the main section of Chicano Park.

At one point several protesters walked out of the Bordertown Patriots section, determined to enter the main section of Chicano Park, where the majority of counter-protesters had gathered. After a minor altercation, they were sent back by several police officers.

No other incidents were reported during the remainder of the morning, during which protesters and counter-protesters yelled at each other (with some reportedly instigating fights), but they were separated by the police officers stationed along Logan Avenue. The Bordertown Patriots group left the premises at 12:30 p.m.

Bordertown Patriots are nothing more than a group of white racists embracing the true MAGA mantra of MAWA (Make America White Again). Unfortunately the older white population that voted for Trump pine for the day when Blacks and Browns were kept in their place and the Whites had all the power. They want to go back to the day when gays were in the closet and there was no such thing as LGBTQ and no PRIDE.

You may not like what they say, think or do, but that doesn't mean they cannot peacefully express their views.

I have no problem with them peacefully expressing their views but that is not what they are there for. They are there to provoke not to promote dialog or exchange of views. They have the same views as the KKK and other like groups.

Let's hope the person who punched the SDPD officer gets a nice long stay in county jail.

If it really matters to you, and I wonder if it does, you can be assured that anyone who does anything to upset a cop gets the book thrown at him/her. But with the current release policies, whatever the sentence is, the perp will serve no more than half of it, and likely even less.

That cop wasn't "upset"; he was attacked (punched in the face) and hospitalized as a result.

I spent Sunday at Balboa Park. Didn't see an American flag. There's one across the street at the Veteran's Memorial Center. I don't recall one in North Park, Mission Bay Park… Or any local park. It's a travesty! It's unAmerican! And while we're making things right we should also put up Confederate flags and good honest Christian crosses and, and—would adding a swastika make those people happy?

I'm recalling the days when we all had to go to the polls to vote. My neighbors who put up flags for 4th of July and voting days were the same ones who couldn't bother to vote. Very few could name their mayor, their governor or any other elected official but the president.

Hmmm, I don't ever fly the US flag, but I vote in every election. I not only know who my elected officials are, but I've also contacted them. Duh, it's called participatory democracy.

How do you know if they voted or not?

And no American flag on the Pride flagpole in Hillcrest, and none is required.

Elected officials who wear the flag on their lapel and in photos surround themselves with flags are taking advantage of a tired old marketing trick that appeals to the ignorant. Those of us who aren't ignorant can now see every detail of their voting record and their financial supporters- that tells us who they are and what they stand for. If everyone did that research we could begin to have clean government.

An educated and informed voter is a rare thing. Flag waving and slogans (MAGA) are for the low information voters. The easiest way to decide which way to vote, candidates or propositions, is to see who is backing them.

All slogans are geared toward swaying emotions instead of challenging the intellect. Like "Hope and Change," as well.

"While I think it’s always a bad idea to punch somebody with a badge and a gun, the video shows the officer (who has yet to be named) starting the confrontation by hitting Frederick Jefferson with a police baton as he backs away."