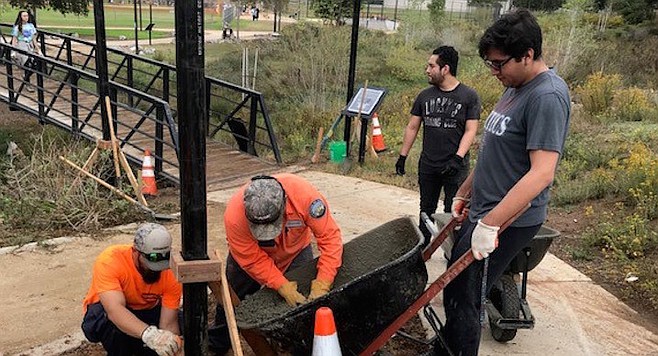 Solar totem poles along the bridge

“I don’t know if you saw it before, it was not a very nice area,” said Nadia Nunez about Paradise Creek where it runs through Kimball Park in National City. Nunez is community manager for youth organization ARTS (A Reason to Survive), which has occupied the former NC public library building on the north side of the park since 2012. 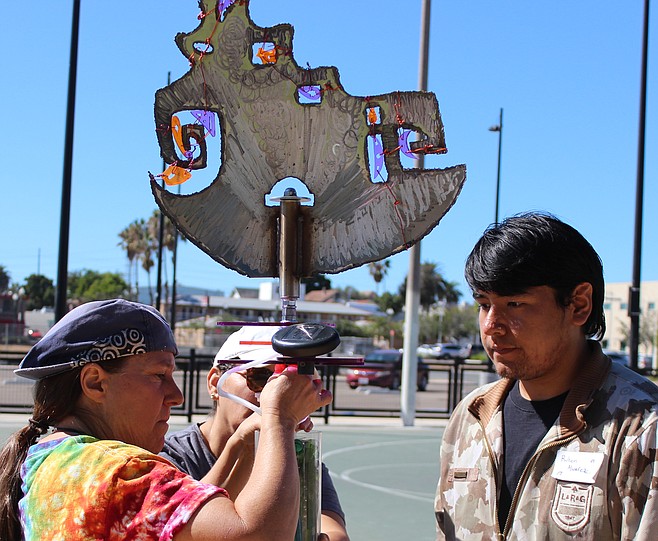 Vicki Leon (left) designed the totems, similar to those that mark the gateway to Azalea Park in City Heights.

The park makeover began three years ago with removal of concrete from the creek bed. Another highlight of the revitalization is a new skate park that opened in 2016. While beautification will continue, workers and volunteers installed the finishing touches on the official project a few weeks ago: a collection of solar totem poles that cross the bridge over the creek. 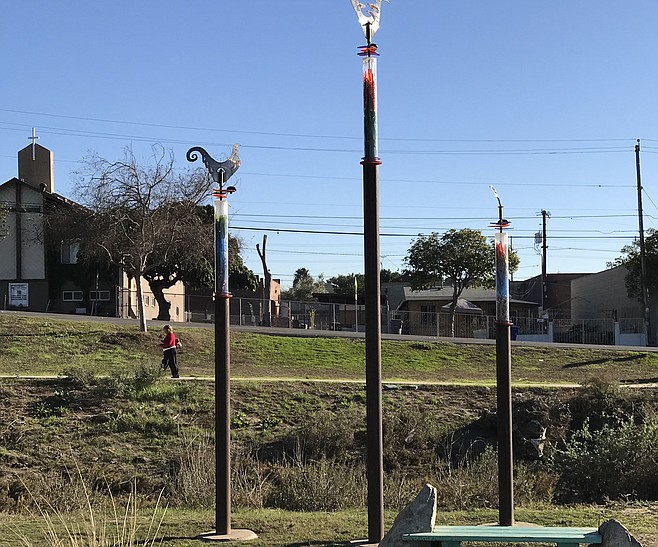 The poles beckon visitors into the park.

The placement of the poles along the bridge beckons visitors into the park from the south side, a lesser-utilized entrance that project organizers wanted to make more inviting. Public artist Vicki Leon designed the totems, similar to those that mark the gateway to Azalea Park in City Heights.

Volunteers from San Diego Gas and Electric helped with wiring and National City donated cement and manpower. Sixty people turned up on installation day to clean up the creek, decorate rocks and benches, and paint a life-size chess board. A $5,000 grant from the American Society of Landscape Architects funded the project.

The youth organization's executive director James Halliday hopes that this and other area projects will help elevate National City’s profile and provide access to opportunities for residents. The group currently has 150 students ages 11-22 enrolled.

Aside from Kimball Park, the organization is involved in more neighborhood improvements. The Market Makeover at Big B Market and Deli, on Coolidge and West 16th, won an orchid award in 2018. Their kinetic sculpture of a bicycle constructed will soon decorate a National City intersection.

Now if they can only get rid of the gang infestation all will be well.