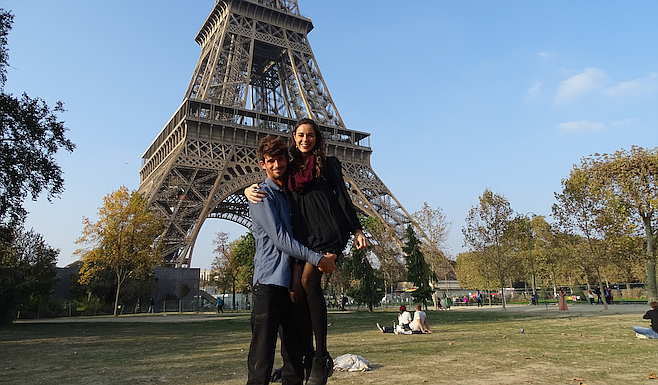 Paris and back again

A trip to remember in the City of Love.

After a couple cups of vino and an 11-hour flight, we land just outside Paris.

Yael and I head out to catch the RER Train into the city center. It's about 10 euros each, and the train both arrives and departs precisely on time.

It’s October, and we've arranged to stay in an Airbnb in the old Latin Quarter of Paris by the south end of the Luxemburg Gardens. The flat is right above a small pub with red awnings, black tables and wicker chairs. An easy place for a quick pint. The host arrives a little later in a long pea coat, and we enter a small stairwell that winds up to his bright red door. It sits slightly diagonal, as this old building is sinking.

Upon entering the room, you discover everything in a single glance. No space wasted, I’ll say. Ergonomically folded furniture and appliances spare no centimeter of the room.

“We’ve got everything we need. Thank you.”

Breakfast in the Luxemburg Gardens

In the morning, Yael takes me to one of her favorite boulangeries, La Durée. Everything looks delicious.

We make our way to the Luxembourg Gardens for a seat. The garden is surrounded by a tall green iron gate. Inside the park are manicured hedges, grass fields, sporting areas, and vibrant flowers. I notice a statue of a god grabbing an angel and white-marble pedestals of queens and baronesses. A political building with a massive old clock stands proudly at the top of the park.

Did I mention that the chocolate croissants were phenomenal? 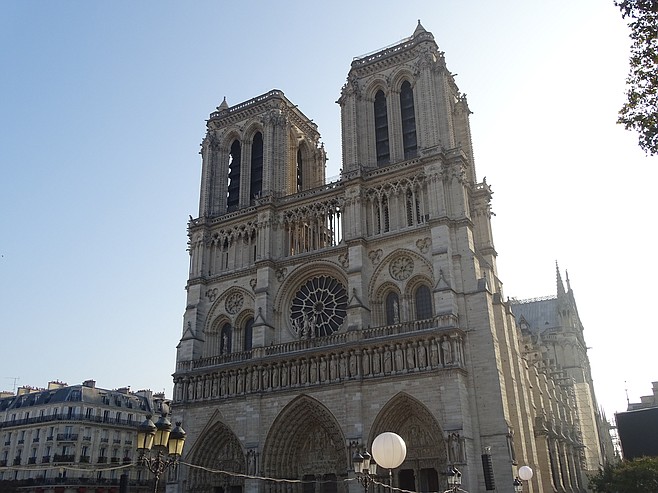 We finish up our coffees and walk along the River Seine towards Notre Dame Cathedral. There are small vendors lining the bank, selling vinyl records, artist prints and old books. The river itself offers an open expanse of the city. Yael and I cross the infamous lover’s bridge, Pont des Art. The locks were not there; instead a new plexiglass lining prevented further love locking. The bridge was sinking due to the weight of all that metal, so I can’t blame the Parisians for averting that crisis. Clusters of locks still find clever places to hang onto, like lamppost corners.

Upon reaching Notre Dame, I was awestruck: the structure is impressive from a distance, with beautiful concentric patterns and two great towers with spires behind them. Each step brings more details of statues and historic engravings into view. Kings, saints, angels and gods stand at every archway. One saint is even holding his own head. (Who knows that story?)

Inside is a vast hall lined with stone columns and huge ceilings with flying buttresses. Light emanates down on effigies through stained glass windows. A choir wearing white cloaks sings softly in sweet voices.

As far as museums go, The Louvre is la crème de la crème. The intricate milky white statues and wall-size paintings will most definitely blow your mind. Several man tears may or may not have been shed. 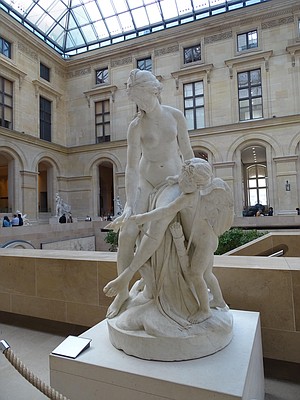 Venus teaching Cupid to use his bow.

Yael and I start with the sculptures: We gaze upon marble-cut masterpieces frozen in time, depicting stories of gods and legends now sealed in stone. Venus lovingly gazes down upon Cupid, teaching him how to fire his first arrow. Cringe at the gnarled face of Medusa lying on the ground as Perseus flies to rescue Andromeda from sea monsters. He wears winged sandals and the cap of Hades, tools that helped him fly and become invisible. With each piece we see history exposed by the poets of their century.

Next we visit the apartments of Napoleon the Great. Lavish, indeed: Crown moldings are plated in gold, paintings crowd the walls, ceilings and floors. His furniture is covered in soft velvet that could seat and entertain a hundred royals. Napoleon’s chambers and ballrooms were nothing short of extravagant. If I were to comment on his throne, however, I’d say it was a tad underwhelming in stature. All puns aside, doing what he did as an emperor and forcefully amassing all this wealth was no small task. I digress…

Point being, you could spend eight hours in the Louvre and not see half of its works. But it was getting a bit crowded by 1 p.m. Getting an early jump on it is advised before the masses show up. The hordes do tend to gravitate towards the big-ticket items like the Mona Lisa and The Winged Victory of Samothrace.

In the meantime, there was something burning a hole in my jacket pocket. I had something special to give to Yael for being such a lovely individual.

We walked out of the Louvre and into the Tuileries Garden. When we wound through the right amount of hedges and bronze statues, I stopped and gave her a big hug and kiss. I told her how much I appreciated being here with her and the joy that she had brought me over the last few years. With an appreciative smile, I dropped down on one knee and asked her to marry me. Lucky for me she said yes. 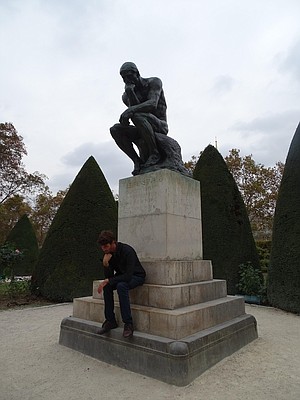 Needless to say, the story goes on and our trip doesn’t end right there. Other notable stops were Père Lachaise for old gravestones, Musée Rodin for more amazing sculptures, and up by Montmartre for some good shopping. Eiffel Tower was meh, but a national icon nonetheless.

The guy holding his head is Saint Denis. Supposedly, he was a bishop of Paris in the third century. As one might guess he, along with some friends, were decapitated by enemies of the church. But he didn’t take the loss of his head lying down; post-decapitation he picked up his head and walked around giving a sermon. This, of course, was miracle enough to make him a saint.