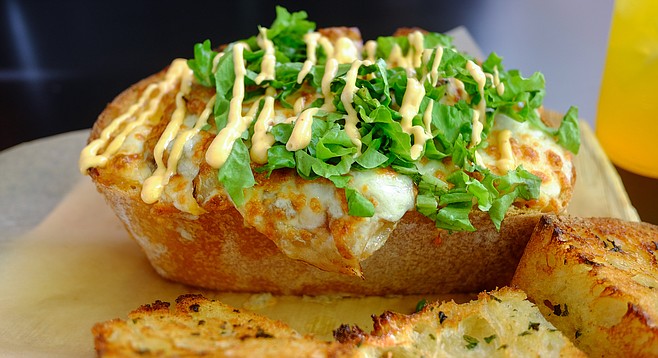 Brick Bowl is a Korean restaurant

If you’re not down with sourdough or vinegar, you can order bibimbap or Korean ramen.

It reads like the sort of thing you have to try at least once. A new Kearny Mesa spot called Brick Bowl dishes up a new way of eating meat, cheese, and bread. Rather than bricks, its bowls are carved from a loaf of sourdough bread, and for ten or twelve bucks, filled with the likes of meatballs, or Italian sausage, baked under a canopy of melted mozzarella.

The idea seems centered around a genuine appreciation for sourdough. A sign on the wall promises bread free of sugar, preservatives, or oil. It points out that thanks to its preparation with live yeast cultures, true sourdough bread can “help regulate blood sugar” and “support a healthy digestive system.” 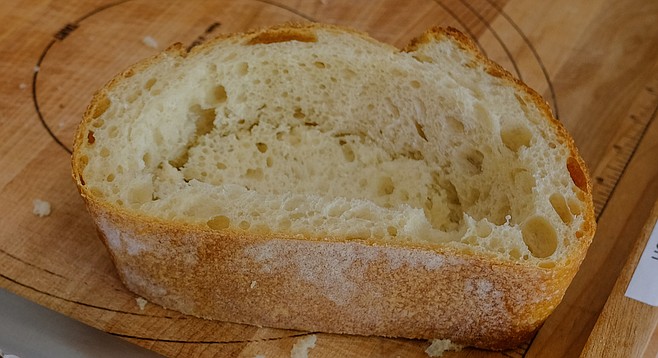 A "brick bowl" is really a hunk of sourdough with a lot of the soft middle carved out.

That’s mostly accurate. A combination of yeast and bacteria in sourdough produces bread with a lower glycemic index, which means fewer of the simple sugars responsible for creating the rapid spike in blood sugar levels caused by conventional white breads. The probiotic bacteria also yields bread easier to digest, and contributes to a positive gut biome, so there’s decreased risk of bloating, indigestion, and corresponding intolerances. 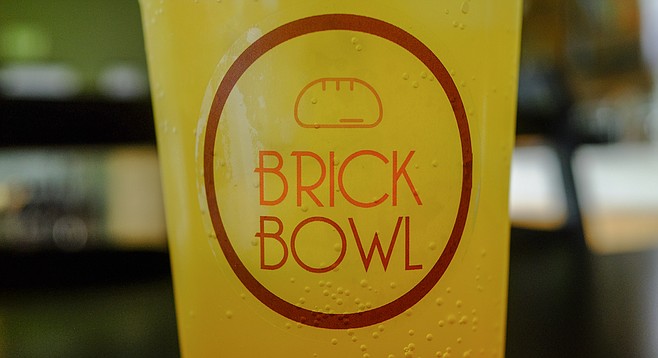 Passion fruit juice and apple cider vinegar, together in a single refreshment

Even if you don’t subscribe to science, there’s one excellent reason to eat it: true sourdough objectively tastes better than fake sourdough sold on the cheap in supermarkets. Brick Bowl makes a mean sourdough garlic bread, buttery and crisp. 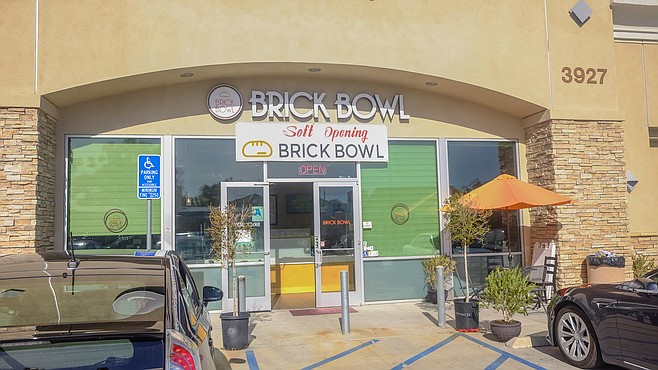 Brick Bowl during its soft open on Convoy Street

The restaurant’s healthy intentions are further backed up by a menu of “sparkling vinegars.” These are fruited drinks made with apple cider vinegar, another probiotic, rich in antioxidants, that does seem to actively reduce blood sugar levels to some degree. I tried one with passion fruit, and it made for a funky refreshment, way more interesting than soda.

Where all this starts to get a little weird is that Brick Bowl is a Korean restaurant. If you’re not down with sourdough or vinegar, you can order bibimbap or Korean ramen.

I say weird because the top seller of this still-new business is its Korean marinated ribeye brick. Unlike the Italian inspired meatballs and sausage, Brick Bowl marinates these thin strips of ribeye in house. From a long loaf of sourdough, a thick “brick” is cut, then hollowed out with a knife and filled with sautéed mushrooms, caramelized onions, and grilled cabbage, in addition to sweetened beef. Mozzarella is melted over the topped, then it’s finished with shredded lettuce and some sort of sweet, spicy mayo.

It’s not fundamentally different from the other bricks, but the unusual combination of flavors baffled more than thrilled me. Meatball and marinara brick, no problem. Grilled chicken and pesto brick, fine. Sweet Korean beef and mozzarella? I’m not ready.

As for the bread bowl concept itself, I’m not sure it adds value over, say, a Korean beef sandwich made on sourdough bread. A sandwich is easy to eat. Whether by hand or using a knife and fork, eating a brick proves a relatively messy, laborious process. Might be better to order the bibimbap instead.