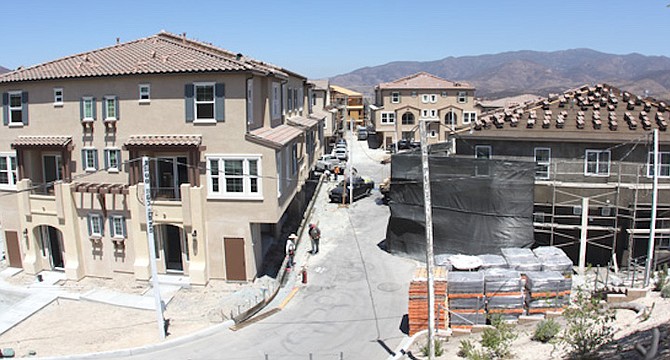 After the housing bubble burst in the 2008 period, the United States has been very slow to replenish the housing stock, or inventory. The partly explains the rise in home prices.

By contrast, the drop in the Los Angeles metro area was 1.5 to 0.5; San Francisco 2.3 to 0.8, and San Jose (Silicon Valley) 2.0 to 0.8. The findings bolster the views of local economists such as Kelly Cunningham, who has said for some time that barriers to home construction have been a major reason for the fast rise in housing prices in San Diego County.

Jazz and hip-hop are two very distinct worlds
Next Article

After the housing bubble burst in the 2008 period, the United States has been very slow to replenish the housing stock, or inventory. The partly explains the rise in home prices.

By contrast, the drop in the Los Angeles metro area was 1.5 to 0.5; San Francisco 2.3 to 0.8, and San Jose (Silicon Valley) 2.0 to 0.8. The findings bolster the views of local economists such as Kelly Cunningham, who has said for some time that barriers to home construction have been a major reason for the fast rise in housing prices in San Diego County.

If activists take Measure L off ballot, they would no longer face mounting legal fees

This is all probably true, but it's also history. My observations are that there is a real housing building boom going on here in No County. It isn't houses that are being built; it is apartments or townhouses or whatever you want to call them. In Carlsbad, along 78, we see a huge development going in just west of College Blvd. They're packing them in with a vengeance. I see similar developments starting all around Vista, and in Oceanside, too. In Carlsbad, I doubt that if Mayor-for-Life "Big Bad Bud" Lewis were still around you would see those high-density projects going up. He didn't like big-box retailing, and after the Price Club/Costco was built about 1990, there wasn't another one anywhere in the growing city until Kim-il-Bud was out of office. I digress.

In addition to the units being built in those cities I mentioned, San Marcos is on a tear with many, many more, and Escondido isn't far behind. At least in this part of the county, there is plenty of housing under construction--maybe even more than is needed.

Who wants to live in Vista, Oceanside, Carlsbad or San Marcos? If you work in downtown or Uptown SD, it's a long commute.

dwbat: The North County commute is long, to be sure, but some people are coming downtown from Temecula. The cost of gasoline is high, but the cost of homes is lower. Best, Don Bauder

The high housing costs in San Diego City/County built Temecula. People were and still are willing to drive farther and longer to have a home.

AlexClarke: That is true -- a home for less than in SD County. Best, Don Bauder

Back in the day, when we moved to Vista, my job was in Encinitas. Many or most of the locals work closer than central San Diego. There is a huge amount of land devoted to commercial/industrial activity in Carlsbad and Vista; San Marcos has plenty of such activity, as does Escondido. So it all depends upon where you work.

Visduh: Your observation is correct. People in North County don't have to drive to downtown San Diego. There are many jobs nearby. Best, Don Bauder

Visduh: I don't doubt what you say. But it is anecdotal evidence. Zillow has the best real estate numbers, in my opinion, but it may agree that a North County boom arose after it had closed the examination period. There is no question that condos and apartments are hot in many U.S. locations. Best, Don Bauder

There is a difference between an apartment and a condo. While the density may be the same a condo is home ownership while an apartment is temporary housing until the rents become to high or you lose your job. The apartments that are being built are all higher rent units that, at some point, will turn into slums as it will take more and more people living in a unit to pay the rent.

Don't forget that many of the condo complexes started out as apartments. The big deal in the 80's and 90's was "condo conversion" where they took apartments off the rental market, did some minimal fix up, and sold them. The whole process was messy and often unsatisfactory. Yes, many of the units were sold to those who didn't want to live in them, but who put them back on the rental market. It happened with a good-looking complex close-by the stadium that had been built in the late 60's. But having lived there for a short time, I knew that buyers would be disappointed.

Visduh: Yes, and during the crash of late 2007-early 2009, high-rises constructed as condos switched temporarily to rentals. Best, Don Bauder

AlexClarke: San Diego metro rents are extremely high, but the percentage of renters remains very high. In part, that may reflect a fear of a collapse in housing values, a 2008. Best, Don Bauder

Apartments are NOT all "temporary housing" as millions of people live in apartments most or all of their lives. It's not just cheaper, but some people don't really care about home ownership. For them, it's overrated. You have to put up with noisy/annoying/nosy neighbors, barking dogs, parking issues, property taxes, insurance, lawn mowing and maintenance.

dwbat: Yes, there are expenses and nuisances that come with home ownership. Economists recommend it, but don't take the nuisances into account. Best, Don Bauder

Where is all the water going to come from for all these homes, of whatever type, being built? Are they really going to implement a 55 gallon-a-day limit per person/household as was recently suggested by the Govenor’s office? If so, why are we wasting millions on desalination?

Don't forget toilet to tap. This is water that the city says will be safe to drink. Of course this is the same people who don't know one water meter from another and blame the customer for high meter readings. What could possibly go wrong?

Fact: all water is recycled. It's even recycled on the International Space Station. And since people are a bit apprehensive about so-called "toilet to tap" water, it is probably made more pure than some bottled water you bought. Some people need to stop being so squeamish. You are much more likely to get sick eating at some fast food outlet, as happens off and on in the US.

More than half of San Diego's water supply comes down the Colorado River — into which about 400 wastewater plants near dozens of towns and cities, including Las Vegas, are discharging their treated sewer water. So yeah, San Diegans are already drinking toilet to tap water and have been for quite some time.

Who says we wasted "millions on desalination"; can you provide some evidence? As the SD County Water Authority puts it: "This new, drought-proof supply reduces the region’s dependence on water from the Colorado River and the Bay-Delta that is vulnerable to droughts, natural disasters and regulatory restrictions." The ocean is an endless supply of water. The Colorado River is NOT.

lots of promises to get funding to build it, now the reality sets in.

JustWondering. Good question. I posed it in a column a couple of years ago. If the county has water problems (it does), why build more developments? It reflects San Diego County politics: the developers own the politicians. Best, Don Bauder

What are the specific water problems in the county? Can you provide details?

dwbat: Sorry. I have neither the time nor space to answer that question. If you want comforting arguments, read the propaganda put out by developers. If you want not-so-comforting information, read the data published by scientists. Best, Don Bauder

You stated: "the county has water problems (it does)." Why can't you post a paragraph or two backing up your statement?

Darren: You have linked to another story highlighting the long-term problem in the West. When a drought ends, the long-term woes are not over. Best, Don Bauder

dwbat: Here is another good summation of the long-term problem: