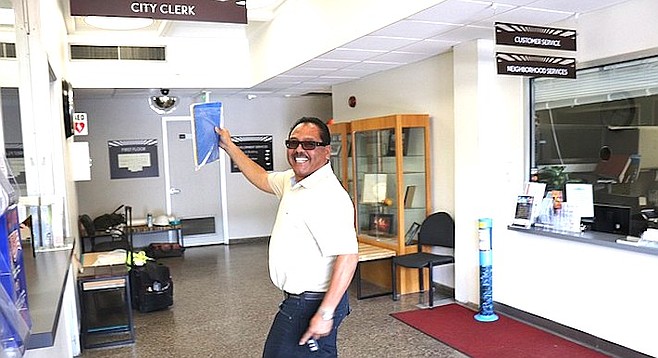 Jerry Cano pulls papers for mayor, then decides not to run

In a political bait and switch, National City council member Jerry Cano pulled papers for mayor on Tuesday, August 7 – exactly three days before the deadline to file to run as a candidate in the November 6 election. Cano then set an appointment with the city clerk's office for Friday, August 10 at 4:30 pm.

Cano was elected to the city council in 2012 and re-elected in November, 2016 to a four-year term. He has been in newspaper headlines more than once, notably when the Chula Vista Star News reported that he had been issued multiple building code violations for non-permitted work at his home. Cano recently accused fellow city council member Mona Rios of inappropriate touching while they both stood together for a photo — a charge he later dropped.

On Friday afternoon, Cano entered city hall alongside Ditas Yamane who ran for city treasurer in 2016 but lost. After about thirty minutes the two left the city clerk’s office, and in a twist, Yamane announced she was running for mayor. According to Michael Dalla, the city clerk, during their meeting Cano decided he would simply keep his current seat as council member for the next two years.

Four candidates for mayor filed their papers by the Friday 5 pm deadline. Ron Morrison, who has served in his position since 2006, wasn’t on the list.

Two contentious ballot initiatives featured on National City’s June 5 ballot, both dealt with term limits. Measure B would have allowed Morrison to re-run for mayor, but Measure C — which termed him out — won with 3,407 votes (55.11%).

Morrison did submit papers to run for one of two city council seats that will come open in November. He faces four other candidates so far: incumbent Mona Rios as well as Sherri Gogue, James Kim, and Jose Rodriguez.

Council member Rios’ seat is up for re-election alongside council member Albert Mendevil. Because Mendivil is one of the incumbents, but did not file before the deadline, other National City residents can file to run for a city council seat by next Wednesday, August 15.

Meanwhile, the four candidates for mayor include Alejandra Sotelo-Solis who has served on the city council since 2008. She kicked off her campaign already back in February, 2018.

Mitch Beauchamp, current city treasurer, served as councilman from 1994 to 2002. According to a Union Tribune report, he recently agreed to complete 80 hours of volunteer work and pay $900 in restitution to resolve an animal cruelty case against him.

Daniel Perez, a loan officer and resident of National City since 2011, has a candidate’s statement that reads, in part: “With a business perspective, and working knowledge in finance, my priority and commitment to this city will be first and foremost to balance the budget and forecast a promising future for this great City. In addition, encourage small business both new and existing so they too can become an integral part of National City’s success.”

Ditas Yamane was a surprise candidate who submitted her papers just before the deadline. According to Dalla, she originally requested papers to run for a council seat but changed her mind at the last minute.

A licensed real estate broker, Yamane mentions in her candidate statement having served as president of the board of the National City Chamber of Commerce and chairperson of the National City Planning Commission. When she ran for city treasurer back in 2016, Voice of San Diego reported that Yamane had been a bookkeeper for Morgan Square Inc., a company that didn’t provide the city with required financial reports for years. Yamane at the time blamed the organization.