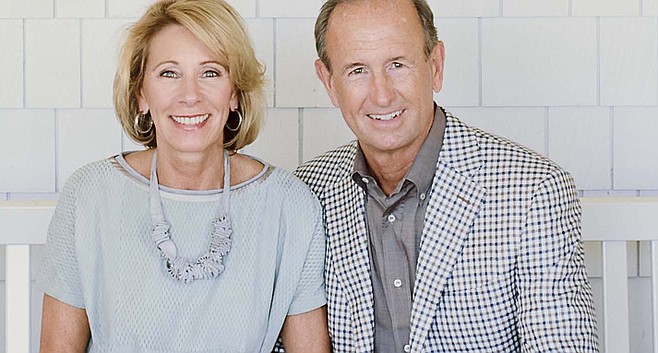 DeVos loosening of rules may be factor

What explains this gigantic goose? For one thing, the for-profit university reported a good quarterly income gain July 26, even though revenue declined. Enrollment registered a small gain, the first in seven quarters.The stock was up more than 40 percent after the earnings were released.

But there could have been another factor. The New York Times revealed that Betsy DeVos, head of the Department of Education, announced that the administration would revoke a rule that has been hurting for-profit colleges. Under the Obama administration, for-profit colleges had to prove that its graduates were able to get gainful employment. This requirement hurt the for-profit education companies, because few can show that their graduates get enough remuneration to pay off their government-guaranteed student loans.

DeVos has been chipping away at other regulations put in place during the Obama years. The restrictions were considered necessary because the for-profits charge much more than non-profit universities, have an inordinately high percentage of total student loans, have a high default rate on those loans and high dropout rate, and then students who graduate have trouble getting remunerative work.

Bridgepoint’s Ashford University, which accounts for most of the company’s income, had default rates around 15 percent in 2012 through 2014, according to Bridgepoint’s report to the Securities and Exchange Commission for the quarter ended June 30. The document reveals that Bridgepoint has settled a dispute with the California Franchise Tax Board but is still undergoing an audit from the Internal Revenue Service, and battling with the Veterans Administration over government loans.

Typical conservative principle: Profit above all else. For-profit schools of all kinds have one goal is to make money. What education they provide is secondary to everything they do. For-profit school recruiters promise what can not be delivered. GTM (Get the money) is their only goal. Betsy DeVoss and her minions could care less about education and everything about destroying public funded schools (and colleges) and providing a clear road ahead for for-profit schools.

Betsy DeVos is the brother of Erik Prince, the founder of Blackwater USA. Her wealth came from the MLM company Amway.

don bauder, Yes, WE do, but apparently our resident monitor doesn't.

danfogel: Our resident monitor does not monitor the blog comments by me or by anybody else. We're all on our own in typos and grammar. Dwbat made the kind of mistake anybody can make. The blog monitor does check comments for ones that are libelous, in egregiously bad taste, etc. Best, Don Bauder

don bauder By resident monitor I did not mean anyone doing so on behalf of the Reader. I was referring to the individual commenter whom you named above; the one who seems be unable to leave his past as an associate editor in the past.

danfogel: As I said, that is the kind of mistake anyone can make. Best, Don Bauder

haha, you got me on that one. Senior moment, for sure.

dwbat: I have senior moments all the time. Best, Don Bauder

dwbat: She is the sister of Erik Prince, former head of the mercenary firm formerly named Blackwater. It tried to set up a huge training facility in Potrero but the valiant folks in that hamlet fought it off. Prince was the one whose trip to the Seychelles may have enhanced the Russia/Trump relationship. Yes, the money comes from Amway, a multi-level marketing operation that preys on naive people. Best, Don Bauder

Yes, I know all that. Don't try to educate me; it's condescending.

Said the holier than thou individual to whom condescension seems to be a favorite pastime.

danfogel: Dwbat is a former magazine editor in Palm Springs. I usually support him when he nitpicks me or a commenter. This time I can't. Any editor should realize that few readers, actually, remember what was printed 11 years ago -- even the fact that it marked the beginning of the late 2007-early 2009 Great Recession. Repetition of basic facts is important. That often applies to something that happened 11 days ago. Best, Don Bauder

dwbat: I wrote a bunch of stories about Potrero and its battle against Blackwater in 2007 -- a long time ago. As I recall, other San Diego media didn't cover the story, except possibly to report on what politicians said. (Initially, to the best of my memory, San Diego pols were all for Blackwater.) A couple of years later, the company tried to put a rifle range or something similar elsewhere in the county. The point is this: you may remember all this, but my guess is the overwhelming percentage of our readers do not. Best, Don Bauder

don bauder, As I recall, it was a facility in Otay Mesa to train Navy personnel in counterterrorism.

AlexClarke: You are absolutely right. You can go back and read my stories about Bridgdepoint dating back to perhaps 2008 or 2009. The company's goal has always been profit. It never gave a damn about education and still doesn't. It used high-pressure tactics to recruit people not suitable for college, then soaked them for a fifth-rate education. At one point it spent more on marketing than education. One of its executives went to work for DeVos when she first took office. Best, Don Bauder

On Wednesday, while visiting the VA Clinic, I was reading a copy of Army Times. That's a publication full of news of intense interest to all Army personnel, and to many reservists. This particular issue had an article about the Tuition Assistance program. Active duty personnel can avail themselves of fairly generous payouts for college-level study, probably quite similar to the benefits provided to veterans.

The piece listed the largest recipients of such tuition by Army personnel, and at the head of the list was the University of Maryland. There's a reason for that. The U of M has "followed" the Army all round the world since the end of WWII. They had education centers at most Army installations, employing local people and sometimes other soldiers as instructors. It wasn't the most rigorous of educations, but perfectly legitimate. Many former soldiers have degrees from Maryland that they completed while they were on active duty, and not just a few never visited the campus.

But high on the list, below the U of Maryland was Ashford University. Not only is it still milking the veterans and their VA educational benefits, it is also tapping the DOD for many millions. Makes me sick, and gives higher education another black eye.

Visduh: Ashford/Bridgepoint has had a lot of problems with the military of late. That is encouraging. One of my recent items said the company get one-fourth of its grants from the military. Best, Don Bauder