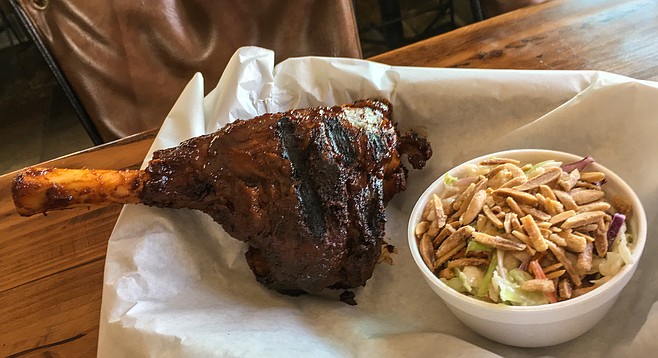 “What can you tell me about the lamb shank?” I ask.

At first, it sounds like a silly question. Actually, a non-answer to my question. But it’s not the first time I’ve been asked this by a restaurant employee. A lot of Americans don’t enjoy lamb, thanks to a chain of fatty acids that give it a distinctive, gamey flavor. But apparently some order it anyway, then complain when the meat tastes different than beef. 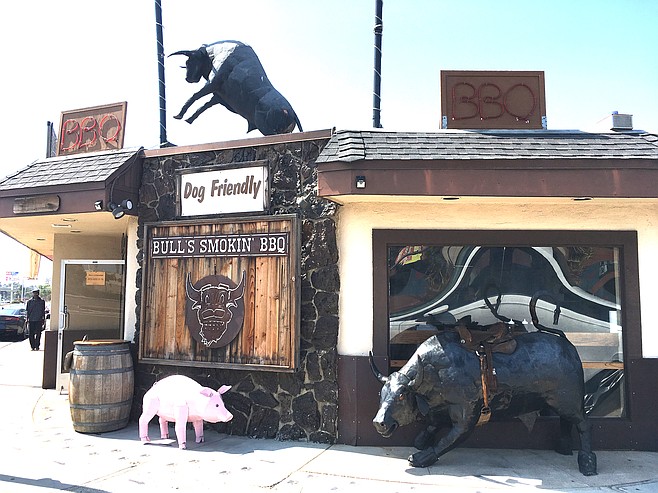 That’s probably part of the reason most American-style BBQ spots don’t serve it. But Bull’s Smokin’ BBQ does, and that’s why I’ve dropped by the casual Morena District restaurant this sunny afternoon. Smoked lamb shank, $9.99, first listing on the Specialties menu, above smoked chicken and smoked salmon.

As someone who does enjoy lamb, I really just want to know how long it’s been smoked (six hours), and whether it comes with any sides (it doesn’t). I order it, and peruse the $2.95 sides menu for something to eat alongside it. I enjoy coleslaw too, and Bull’s teases the presence of candied almonds in its take on the cabbage salad, so I go for it.

Looks-wise, lamb shank is the mammalian version of a turkey leg: a thick mound of flesh clinging to the end of a bone (all my vegan friends just left the room). The only trouble with this serving is cutting through an outer layer of silver skin. Not really skin, but a rubbery membrane of connective tissue, silver skin doesn’t crisp up like chicken skin, and isn’t any good to eat, so it’s usually a little better from a customer perspective when it’s trimmed prior to cooking.

To enjoy the plentiful lamb meat doing its best to fall off that bone, I have to peel that away, which is a shame because that’s the part slathered with charred BBQ sauce. Fortunately, there’s BBQ sauce everywhere you look at Bull’s, from bar area to dog-friendly patio, so every bite winds up as smothered as I want it to be.

One has to suppose most people will prefer Bull’s brisket or pulled pork offerings, but it’s cool to have the option for BBQ lamb that isn’t Mexican barbacoa. If you do try the shank, add a side of steamed rice or mac & cheese. Slivers of candied nut make the coleslaw, as a whole, terrific, but love it or hate it, lamb flavor is rather pronounced. Whether you dress it with Bull’s regular, sweet, or spicy BBQ sauce, the result proves too bold for coleslaw to balance alone.