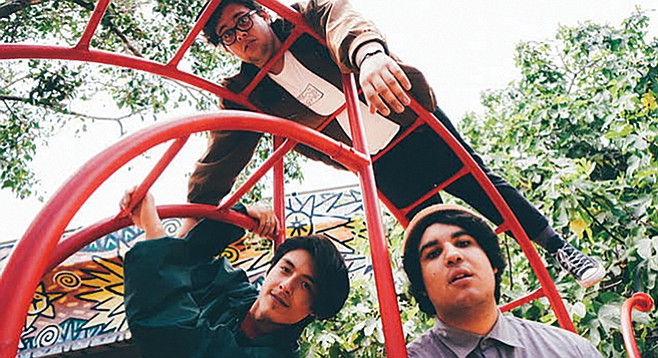 “I really want to emphasize this was our upbringing and this is who we are.”

Logan Heights born-and-raised Pablo Cervantez has always been low key about Beach Goons. But that’s all about to change, says the singer/guitarist/songwriter about his trio that grew out of the local garage punk scene.

Cervantez, 19, was recently contacted by Pat Magnarella, the longtime manager of Green Day and Weezer. The Encinitas-based music business heavy hitter was preparing to launch his own record label GRNDVW (pronounced Grandview), and he and his right hand man Graham Martin wanted to talk to Beach Goons. Magnarella and Martin had randomly come across their music.

“Our first call was from Graham. He asked us where we were playing and we told him the Smell in L.A.,” Cervantez says. “They came up to see us play in December.”

Next came a meeting in the Encinitas offices of Pat Magnarella Management. “We didn’t even know who they were at first,” says Cervantez. “It was a super rad office with Green Day posters and surfboards and all these MTV astronaut trophies.”

“Things went well at that meeting,” recalls Cervantez. “They told us they liked what we were doing and that they had the resources to help us.”

They upshot is that Magnarella signed Beach Goons for exclusive representation. They then set up the band with an East Coast publicist and a Bay Area booking agency.

The very first GRANDVW record will be the Beach Goon’s hoodratscumbags, to be released in all formats August 24. Cervantez wrote all the material on this, and on the first Beach Goons album Boisad, released three years ago. He says he can no longer hang with the surf/pop-punk brand used by many other locals. “If I have to call it something, I’d like to call it Pachuco music. That was Mexican slang that used to be mean bad-ass, punk, hood-rat… I was born and raised in Logan Heights surrounded by Chicano/Mexican culture. I really want to emphasize this was our upbringing and this is who we are.”

Cervantez says the only other artist to make it out of Logan Heights was Rafael Reyes of cholo goth duo Prayers.

“When I was growing up people people would make me feel embarrassed of where I was from,” says Cervantez. “People said they were scared to live there. That it was too ghetto. Now I take pride being from there.”

Cervantez designed the back cover art for hoodratscumbags himself, inspired by the artwork from the Loteria (Mexican bingo) game. The front was designed by local designer Legna. “We’re from a Mexican community, we’re all Mexicans, and we really love showing it.” One of the songs from the new album, ‘Chunti,’ is sung in Spanish.

Hoodratscumbags was partially recorded at XYZ Audio in La Mesa and Rarified Recording in North Park. The Beach Goons appear Saturday, August 25 at the Irenic with Super Whatever and King Shelter the day after their album is released.

Rafa is from SHERMAN heights. Not Logan.