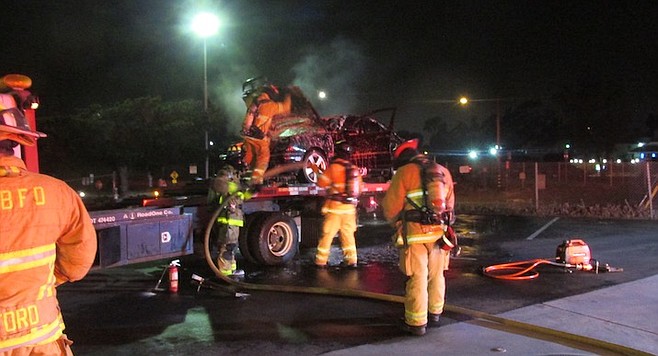 So much for the fire extinguisher

Mercedes on fire on I-5 near Manchester

Traveling northbound on I-5 just past the Manchester Avenue exit in Cardiff by the Sea, Jose and Augustine’s 1998 E-Class Mercedes car became disabled. They thought it had just overheated.

Anthony from Allied Gardens Towing in San Marcos came to their rescue around 9:00 p.m. on April 22. When he loaded the car onto his flatbed rig, he thought he tasted antifreeze. (Chemically, boiled-over antifreeze affects one’s taste buds first.)

He stopped at the next exit, pulling into the Cardiff Chevron at the Birmingham Drive off ramp to check his tie downs of the vehicle, and to make sure fluids weren’t leaking. That’s when he saw the flames.

He grabbed his fire extinguisher, but it was too little too late. When the Encinitas Fire Dept. arrived, even though Fire Station #2 is on the opposite side of the freeway, the fire had spread past the firewall into the passenger cabin.

99 percent of all car fires are caused by a failure of something under the hood, said a fire official on the scene, pointing out all the flammable fluids and gasoline in the engine compartment. “When driving, the moving air keeps things cooler. It's when a car stops that things might heat up,” said the firefighter.

The fire department used the Jaws of Life to pop open the hood and attack the flames. “We have to assume the hood cable latch is already melted.” The firefighter pointed out that searching for the hood release is dangerous. He estimated there were probably seven airbags in the Mercedes, and the heat could make them go off, possibly injuring a firefighter.

The fire department used a combination of water and foam over 45-minute period to extinguish the flames.

Residing in Baldwin Park, the self-described Brothers in Christ weren’t sure how they would get home or where they’d spend the night.

Gee, and here I thought that a Benz was such a uber-quality car that it could never do something as crass as catch fire. Even twenty years old, how could this happen? I still see those Mercedes 300D models from the late 70's chugging around the streets and they're (gasp!) FORTY years old. The impression many/most of us carry is that the make will last just about forever if you just service them regularly. (Of course, the MBZ dealer shop will charge enough for the "servicing" to almost buy you a new economy car.) Too funny . . . or something.

my last benz was still going strong at 285K miles when I sold it. take care of them and they last.

" . . . the self-described Brothers in Christ . . ." Maybe Jesus will give them a lift after all he apparently failed to stop the fire.