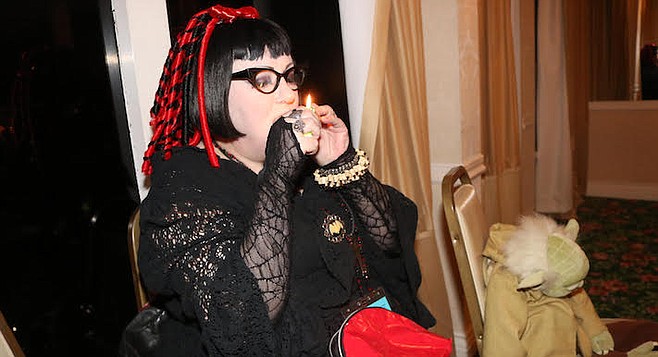 The weed connection with cos-play

“I’m burning one for George [Clayton Johnson],” said Storm, as she lit up her three-inch brass pipe filled with “Skywalker” weed. 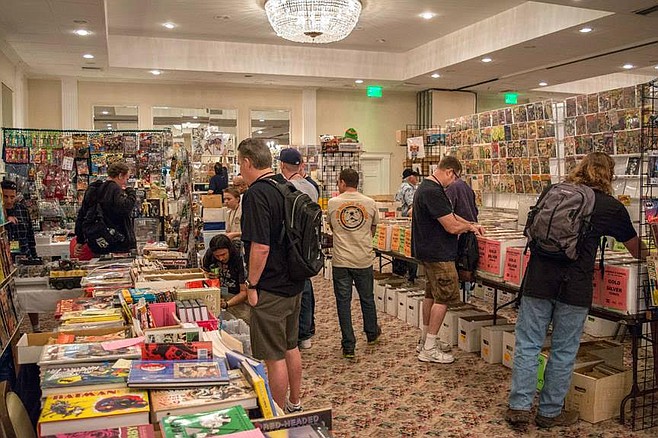 “Oh, snap,” I said, then motioned over to the security guard at the Frankenstein display next to the elevators.

Storm snickered and exhaled a big cloud of smoke, simultaneously.

“What are they going to do,” she said, “throw me out or call the cops. That’s what George would’ve said.” 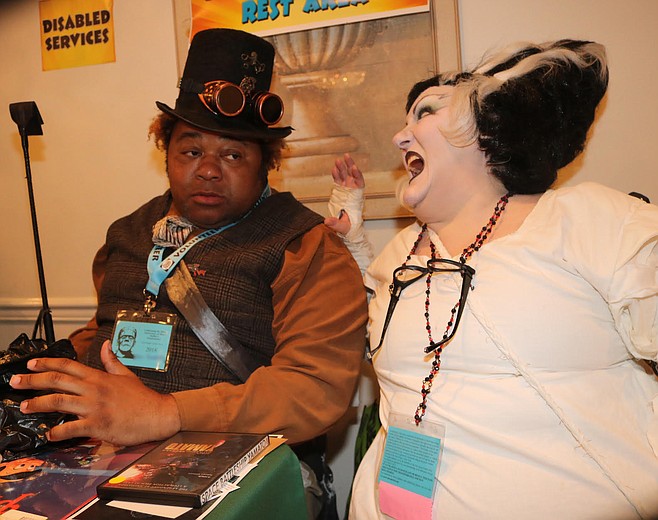 “Back then we called it ‘Alf-weed,'” said Aeion Solar.

At 9 p.m. on April 20th, we were loungin’ on the seventh floor of the Regency Tower that’s located on the northeast section of the Town and Country San Diego resort (about a hundred yards south from the Fashion Valley Mall). This was the first night of the Sixth Annual San Diego Comic Fest, which also was the 4/20 date to commemorate weed day. 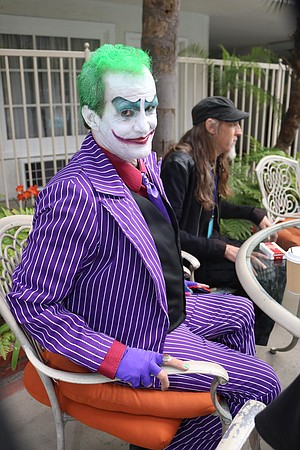 Doc, who cosplayed as the Joker, reached down into his Gumby socks and pulled out his stash.

“Us comic book nerds aren’t any different,” she said.

“Aye, aye to that,” I confirmed and lifted an empty plastic cup.

Storm, 50, is a professional costume designer and creator. “I’m a cos-business,” she said, “not to be confused with a cosplayer that runs around in an anime-styled outfit that’s giggling all of the time.” She makes costumes for fellow cosplayers, re-enactors, steampunkers, drag queens and burlesque performers — for hundreds of dollars. 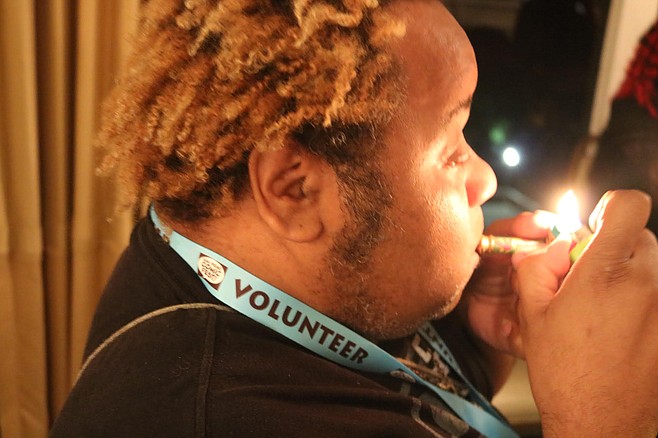 "Now we smoke top-shelf shit through a vaporizer."

She usually cosplays as a Klingon, an “extraterrestrial humanoid warrior” species in the Star Trek franchise. Tonight, though, she played it down and wore her goth ensemble with red hair extensions and vintage cat-eye glasses.

“I’ve been smoking weed for my migraines and anxiety,” Storm said. 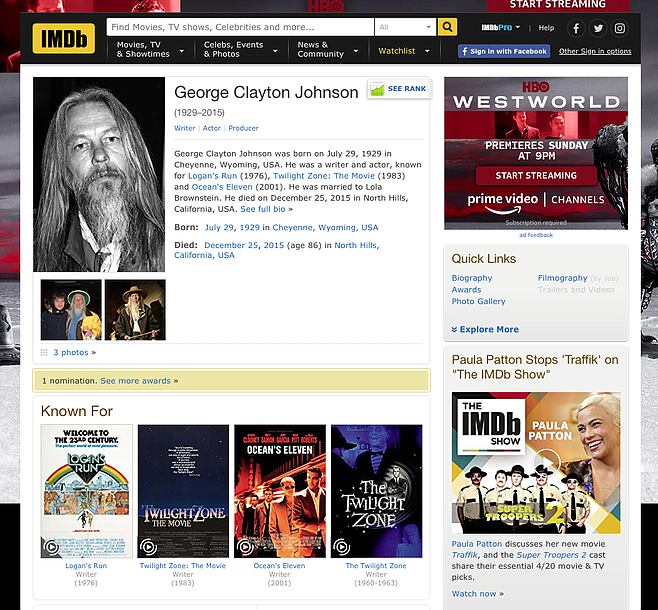 George Clayton Johnson. “He used to hang out with us here and we smoked pot in the gazebo downstairs."

We spoke in the now-empty Windsor Rose room, where earlier in the day, artists displayed comic-book artwork on easels and booklets on top of eight-foot tables, in hopes to commission their work or sell their art pieces.

“No, I don’t smoke,” said Lee, a Chula Vista-based artist. He was the last one to close up shop by the Transylvania inspired castle-brick-decor. His original art was selling for $10,000, and prints were at $10 apiece.

On the opposite side from where we interviewed, is the Le Chanticleer Room, or for this special night, the Frankenstein Cafe. The lounge faces the 805 and 8 freeways, and for this occasion, it was packed with art displays, steampunk concoctions, and live musicians. There were about 50 attendees that consisted of vendors, comic-fans, artists and customers — that got their drink on. In front of the fully stocked bar was a three-foot cake to celebrate Frankenstein’s 200th birthday. Many here networked and spoke of their transition to the 2018 comic-book industry, but our little group, kept it old-school.

“Back then we called it ‘Alf-weed,'” said Aeion Solar, 52, an artist and a classically trained actor. Solar, which is his cosplayer name, dressed as a Sith Lord from Star Wars, and was the official disabled service coordinator for the Comic Fest.

“The first Comic Fest show in 2012 was dedicated to Richard Alf, who had just passed [in January of 2012],” Storm said. “He was lovely and he smoked too.”

“He was one of the founders of the Comic Con [International] and we partied with him at the Marriott Hotel in the 1990s,” Solar said, “and I was one of his [comic book] customers at Comic Kingdom on University Avenue in the 1980s.”

Ray, another Comic Fest staff member, joined our discussion, which cued Storm to hide the weed in her Yoda backpack.

“We talked to him (Richard Alf) in November of 2011,” Ray said, “and he was on board and ready to be a part of our show. By the time we got the planning committee going, he passed away.”

“He was tall, like 6’6″,” Storm said, “and had the funniest laugh, like Dwight Frye in Bella Lugosi’s Dracula.”

I asked Ray if he smoked with Alf too, and he said “I can neither confirm nor deny.”

(The next day on April 21st, I spoke with Mike Towry, a close friend to Alf and the president of Comic Fest organization. He declined to give a statement regarding 4/20 and his buddy, Alf.)

When Ray took off, Storm reached back into her Yoda backpack again. She topped off her pipe with a different type of indica weed, called Deathstar.

When Storm gets high, she reads the Sandman and Death titles from the DC/Vertigo comic book line.

Solar, likes to read Judge Dredd comics. “The underlying messages become more direct to you when you’re high,” he said, “because you’re more in touch with your emotions and you can’t be as detached as in a non-altered state (sober).”

Storm agreed with her cosplaying-comrade, and took another puff. “George Clayton Johnson, this is for you,” she said. “He used to hang out with us here and we smoked pot in the gazebo downstairs. He co-wrote Logan’s Run and wrote four Twilight Zone episodes.”

Earlier at about 4 p.m., Doc, who cosplayed as the Joker, reached down into his Gumby socks and pulled out his stash. He loaded up his blue glass pipe with organic bud from Sonoma County, and at 4:20 p.m. exactly, sparked it up and passed it around. “I use this for medicinal purposes,” he said, “I was bed-ridden for two years and this is my coming-back-out party.”

Doc, 53, is a professional circus performer that used to live in North Park (he now lives in the Bay Area). He hung out by the swimming pool and took photos with the attendees. “A lot of the creators of the shows that we used to watch (H.R. Pufnstuf) had to have smoked weed,” he said, “…. and now SpongeBob SquarePants.”

“This show here reminds me of the El Cortez comic shows,” Storm said, “with the comic and toy dealers in the various rooms spread out, and the panels and artists’ alley in the other areas.”

“Back in the 1980s, us teenage stoners got a buzz on dirt-weed and tripped out on Zap Comics and watched Heavy Metal on VHS,” said Pauly, a comic book collector looking for a Ren & Stimpy #1 comic book with a fart scented air-freshener, “….. now we smoke top-shelf shit through a vaporizer and binge-watch Rick and Morty on Netflix.”

“We use to get high at the 24-hour movie rooms at the convention center (Comic Con International),” Solar said, “and slept there.

They stopped doing that and the con just mushroomed and got bigger and bigger.”