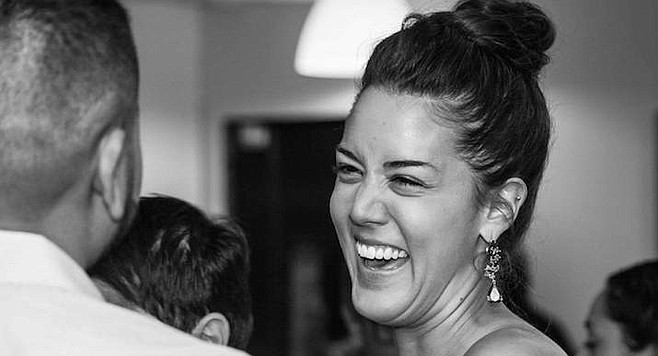 On April 18, Barrio Logan's community planning group had a do-over of their March 21 election. The impetus was a complaint lodged, shortly before the polls closed, against members of the environmental health coalition for handing out flyers of endorsed candidates during the voting. This alleged electioneering violation halted the election. 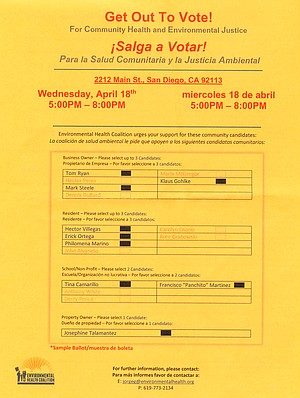 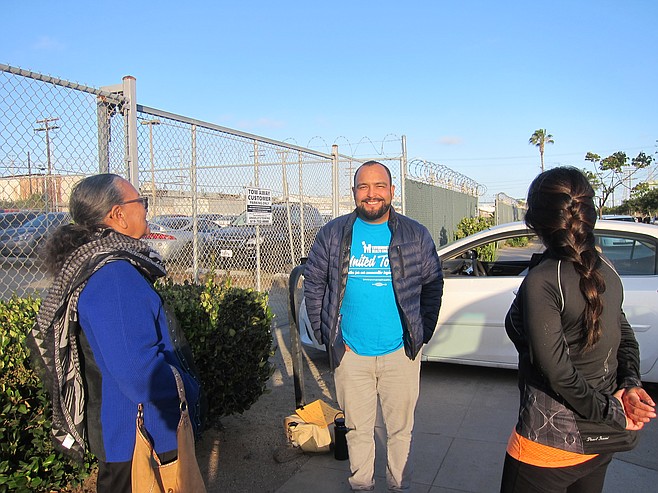 Environmental coalition members down the street talking to voters and handing out flyers at the April 18 election. 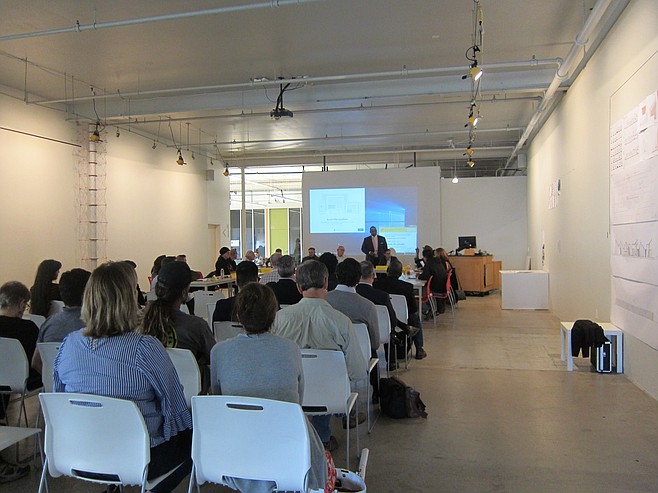 This is only the second election for the city's newest planning group. A group born out of the ashes of conflict surrounding a community plan now 40 years out-of-date. Barrio Logan's councilmember David Alvarez championed the formation of the community planning group in 2015.

Barrio Logan's community plan was approved by the city council in 2013. The maritime industry got a referendum on the 2014 ballot to overturn the city council’s vote. Kevin Faulconer supported the referendum as he campaigned for mayor. Both got the votes they needed. Barrio Logan was left in the dust with an outdated community plan that did nothing to hinder industrial businesses from opening up right next door to schools and residences. The plan still sits in limbo as the Port expands their operations.

About a week before April's election, Diane Takvorian, executive director of the environmental health coalition, talked about the alleged electioneering violation. Takvorian said while members of her group did pass out flyers endorsing several candidates, it was never inside the building where the voting was taking place. "There are no rules about electioneering. There is in municipal elections, but doesn't exist on this level."

Takvorian said during the group's first election in 2016, people associated with the Port were seen handing out flyers endorsing candidates. "No one complained then because it's not in the rules."

Rafael Castellanos, a Port Commissioner said, "Employees of the Port have never handed out flyers. We’re a non-voting member of the planning group. We don’t participate in the elections in any way."

At the April 4 meeting when the election was officially invalidated, Takvorian said the board talked about enacting rules. "They asked me what I thought about where we should stand to pass out flyers. They admitted there was no rule essentially by having to make one."

A representative from the city stated the planning group's bylaws and council policy do not allow the promotion of slates of candidates. Council policy that is referenced in the bylaws discourages electioneering during voting but does not stipulate a distance electioneers should be from polling. For the April election, all electioneering had to be 100 feet away from the polls.

Ultimately the city's stance is that local community planning groups are self-governing and it's solely their call to certify an election or invalidate it and hold new elections.

A candidate for a seat on the planning group, Carolyn Osorio, didn't win a seat but plans to be an active voice at future meetings. She said she was glad there was a do-over election. "Then the results can be completely above reproach. Otherwise, the results would have been vulnerable to appeal or questioned as in the members associated with the shipyard could decide to question the board's objectivity when it came to any decisions they disagreed with. This would have undermined the planning group's influence."

"I decided to run because the planning group is predominantly composed of business and property owners making decisions for people that are living and breathing the Barrio on a daily basis. It's also comprised almost exclusively of men with not a single member of the group under the age of 40. How is this a representative body of a really diverse community?"

I asked for her take on the alleged violation. "During the [March] election, I saw [the coalition] essentially blocking the doors of the polling place. I even witnessed one of the [coalition] candidates walk a voter to check-in, get their ballot with them and walk them through it." She's not sure who complained, but doesn't think there was any malicious intent on the part of the coalition.

Osorio's big issue is the zoning free-for-all that stems from the lack of an updated community plan. Last year, attempts were made to start the update process over. The community isn't having it. One local at the April election said the plan the city council approved in 2013 is the one the community wants. He said they are willing to wait until 2020 after Faulconer is termed out, since they have no illusions of him championing them. According to Alvarez, the balls in Faulconer's court.

Todd Gloria's name was dropped by more than one person as someone that wants to run for mayor in 2020. Gloria is a former local city councilmember and current state assemblymember. Gloria's office responded: "Todd will do everything he can to help the Barrio Logan community regardless of his title – whether that be [as] assemblymember, mayor, or citizen. He believes what happened to them was disgraceful and they deserve better."

The April 18 election looked to go off without incident. One of the group of women manning the polling area said she was part of a non-partisan group there to help with the election. She said out of about 100 eligible voters, an estimated 60 voted in the March election and with 1-1/2 hours before the polls closed, 84 had voted so far in the April election.

I then talked to three environmental coalition members down the street handing out flyers. One voter stopped by and jokingly asked for the "cheat sheet."

Katie was there to vote with her husband Robert and their new baby. "I think about my neighborhood and how forgotten it feels. I feel like people that have grown up here are told that all of this [she pointed to the industrial machinery at every angle] is good for them. You look at this park they built [with a view of the industrial Port] and we're supposed to be happy, but it's like they throw morsels at us."

The planning group is what many locals hope will make the difference after so many years of having those that don't live in their community decide their fate. The entire city voting to overturn their community plan is one such example. An elderly woman I spoke to at a 2017 planning meeting said, "We get nothing, we don't get asked, we don't get respect, it's the same thing all the time."

Takvorian contacted the author after publication and wanted to make clear that she was referring to tenants of the Port handing out flyers in 2016 and not the Port of San Diego itself. She further said the community plan being in limbo has no impact on the Port's activities as it's a separate entity comprised of five cities surrounding the San Diego Bay (San Diego, National City, Chula Vista, Imperial Beach, and Coronado). She said that pro-Port candidates mentioned in the article should have been referred to instead as pro-Port tenants. She wanted to make clear that the Environmental Health Coalition's "slate was not anti-Port but pro-community."

"Todd will do everything he can to help the Barrio Logan community regardless of his title – whether that be [as] assemblymember, mayor, or citizen. He believes what happened to them was disgraceful and they deserve better."

Who does he think he's kidding?!? Todd sabotaged the Uptown Community Plan Update, shot down every recommendation made by that local planning group, and at the last minute pushed through a plan tailored to his developer donors.

Anyone in Barrio Logan who believes Todd is going to treat them any "better" than his actual constituents "deserved," is only in for further disappointment.