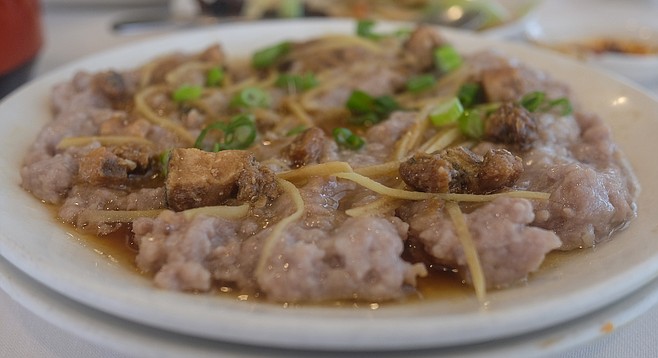 "I’ll make sure to bring you plenty of rice"

The pale wood panels lining the weatherbeaten two-story storefront of China Max may not inspire a lot of confidence to the casual passerby, but during its fifteen years operating on Convoy Street, the Cantonese restaurant has gained a reputation as one of the city’s most reliable bets for dim sum.

But its menu covered far more ground than dim sum, so I wanted to check out a few scattered dishes, and found them more to my liking than similar fare at neighboring restaurants. 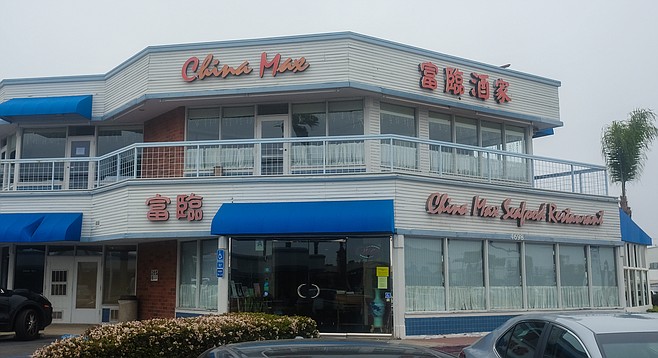 It's not a shiny new restaurant, but still a worthy Cantonese spot on Convoy.

An exceedingly simple “country style” stir-fry of lotus root, wood ear mushrooms, and assorted vegetables ($9.75) let the ingredients do most of the work, each cooked to its sweet spot of flavor and texture. A plate of peppery Szechuan-style meat ($10.50) muted the usual Szechuan spiciness, but while I might have liked it to go hotter, this mild take taste good enough that it kept me going back for more. 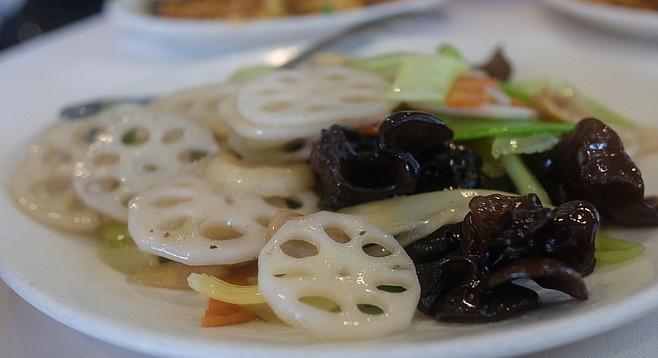 It’s telling that I didn’t eat either over a bed of rice, which I usually do as a white dude eating Chinese food.

It’s possible the restaurant staff conspired to cool the dish down, in deference to that white-dude palate. Indeed, when I asked about a more complexly flavored dish of steamed minced pork with salted fish, my waiter tried to steer me away from it.

“Oh, I like it,” he assured me, “But….” He suggested I go for a baked pork chop, or a sweet and sour dish instead.

Challenge accepted. Like it or not, I would not leave satisfied until I found out what steamed pork and salted fish taste like together. So I ordered the $10.50 dish, which in Cantonese would be called Hom Yee Jeng Yook Baeng. With a nod and a laugh, the waiter said, “Okay… I’ll make sure to bring you plenty of rice.”

Prior to this, the closest I’d come to this combination of flavors had been the pork and crab soup dumplings at Joe’s Shanghai in New York City’s Chinatown. Since I count those among the best Chinese dishes I’ve ever eaten, I was confident this would surely become a new favorite.

However, when the plate appeared on my white linen covered table, a fetid odor came with it, one I’d associate less with food than a gym locker room, or feet that have been wearing shoes without socks. My confidence waned.

Tentative, I tried each component individually. Ground pork, when steamed, takes on a vaguely gelatinous look, and while this tasted of a low-salt pork loin, the texture more closely matched its appearance. The salted fish, produced by a vendor in Baja, was responsible for the smell. The crispy, dry morsels have the consistency similar to chapulines, with a fishy, mackerel-like flavor that features too much salt, coupled with an earthy, fermented funk aroma.

Eaten separately, I didn’t want any part of these ingredients. But a funny thing happened when I ate them together. They stopped being gross. The dish became salty and complex. That people pleasing pork flavor reined in the odorous fish, and vice versa, the two extremes merging to find a pleasing middle territory I could really dwell upon while chewing. I mean, with plenty of rice in each bite.