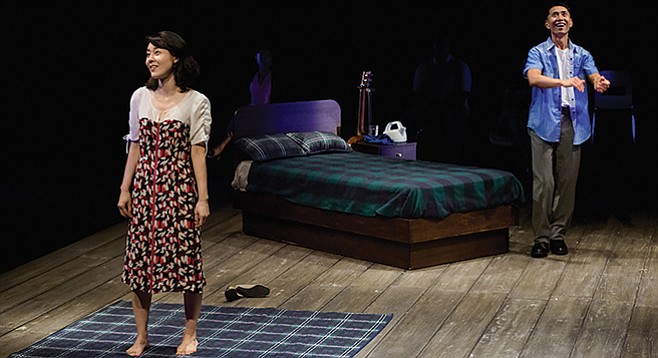 The torture of being Korean

Defector from the North, goose father from the South

Much of Hansol Jung’s Wild Goose Dreams takes place in a cyberspace Babel. Throngs of voices, mantras of zeroes and ones, and pop-up ads scream for attention, pinball off each other, and drift away. If one makes some sense, it’s no help, and stole focus from one that might. When at their computers, Minsung, a South Korean, and Yoo Nanhee, a North Korean defector, are hapless targets for bombardment from Too Much Information Central. Somehow, they come together.

He’s a married man, a “goose father” who sent his family to America so his daughter can attend English-speaking schools. In South Korean “goose families,” the parents separate for their children’s education. Minsung lives in a tiny, dorm-like room and works at a Samsung factory to support them (on South Korean TV, goose fathers are often portrayed as lonely, workaholic drudges). He communicates with his family by email.

Yoo Nanhee, the defector, has lived in Seoul for four years. She’s still torn between the promise of a new life and returning home. The father she left behind said she must choose between flight or family. She fled. Now, along with profound guilt, his specter haunts her. Is he still alive? Did they torture him because she got away? Why did he manifest himself the first time she and Minsung made love?

There was a time when “having it all” was a hot topic. Can you? Dare you? Wild Goose Dreams verges on the opposite. Although Yoo escaped a dictatorship, she’s pinned down, unable to move forward or back. Minsung did the honorable thing (when they return, his daughter will gain high status for being bilingual). But he’s practically a slave. Minsung and Yoo have loved ones far away. They differ, however: he chose loyalty to his family, she to herself. In a way, they have no individual identity. Loneliness sends them to the free trial for an online dating service. A verbal romance develops and demands a face-to-face. When they finally meet, they are strangers to each other and to themselves.

Actual contact releases questions held at bay. Why does Minsung’s wife send fewer emails? Yoo’s father, visible only to her, shapeshifts into various beings: some playful, some cruel. Many are penguins enacting his different possible fates. But why does he play so many kinds? Which one is real? Yoo and Minsung’s inner lives become as swirly and chaotic as the internet.

The script flits from the actual to the fantastical and raises an aesthetic question: how do you put these worlds on a stage?

The play and director Leigh Silverman’s answer makes for one of the most intricate world premieres in some time. Seven cast members follow the action, not like a static Greek chorus judging from afar, but as participants. They play bounding text messages and emojis and sing staccato blips and bleeps (Paul Castles and Jongbin Jung’s lively, often pointillistic score almost qualifies Dreams as a musical). They move and dance with graceful spontaneity (choreography, Jasmine Lee). And they are funny.

Julian Cihi and Carolyn Agan play avatar-like versions of Minsung and Yoo. They loom behind the new lovers and offer what seems sound, though at times counterintuitive, advice. All perform on Wilson Chin’s set, which combines the mystical with the barest of realities. Unvarnished wooden planks jut out to the audience like a thrust stage; two large black recessed rectangles flank the floor. Sometimes, and sight unseen, they fill with water.

The three leads are standouts. As the Father, Francis Jue begins with a haunting fable about stolen wings and then captivates throughout. He’s a trickster, an unreliable spirit guide — or is he, since glimpses of wisdom peak through his Cheshire Cat smile.

James Kyson’s Winsong is practical and down-to-earth frank. He’s also a bit of a bumbler, and rightly so, since Winsong’s been exiled from the scene for years and is a bit light on the social graces.

A question trails Yoo as much as her dreams and demons. Much of the piece hinges on the answer: why go back to North Korea? Along with somehow re-smuggling herself across one of the most guarded borders on earth, she’s unsure what will happen if she gets there. Among her imagined scenarios are torture and storm troopers with electric-red eyes, not to mention a deceased father.

Adamant yet tender, Yunjin Kim makes the reason emotionally clear: family above flight. But, amid so many strands and visual riffs, the script blurs her decision. Though it mirrors the babbled confusions of these times, here and elsewhere the imaginative presentation’s so much fun to watch and hear, it upstages the story.

Wild Goose Dreams has a strong beginning and ending. The long middle section, however, needs tightening, even rethinking. Strip away the externals, and the text thins out. Some scenes hold their own with the flashy theatricality; others don’t, and many don’t propel the story forward. Though certainly watchable now, a thorough fine-tuning could make it become something special.