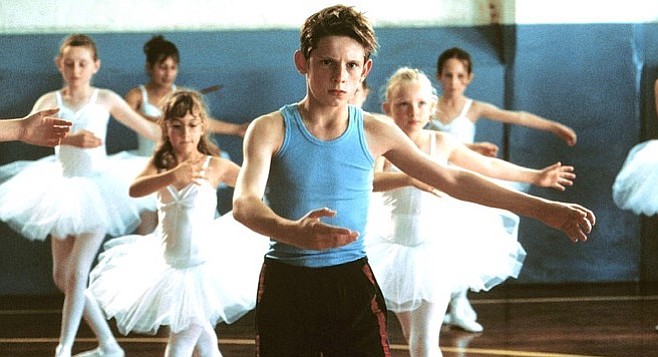 One would think that by the year 2000 the whole Northern England coal mining family with a son who “just wants to sing [or dance]” trope would have played itself out. Especially after repeatedly being mocked by Monty Python.

"I'd rather just sing"

Who can forget the scene from The Holy Grail?

Son: "I'd rather just sing.

Father: Stop that. Stop that. You're not going to do a song while I'm here.

The Pythons took it a bit further on The Flying Circus by reversing the situation and having the son be from a highly cultured family but yearning to be in the coal mines. In spite of Monty Python’s best efforts, Billy Elliot exists.

The movie came out in 2000 followed by a novel and finally a West End musical version in 2005. The musical benefits from music written by Elton John.

Billy Elliot was produced by San Diego Musical Theatre at the Spreckels Theater. It closed October 8.

This hero’s journey follows young Billy Elliot, son of coal miner, who happens to have world class ballet talent. A local teacher recognizes the prodigy, the mine workers go on strike (how could they not?), and now Billy can’t audition for The Royal Ballet. It’s a familiar story, which is why Monty Python torched it 30 years earlier.

To be fair, the show is set during an actual coal workers strike between 1984-85 in Northern England’s County Durham.

Typical plot themes being set aside, the show turns out to be a willing vehicle for some outstanding music and dancing. Since Billy is so naturally gifted as a dancer his father and older brother are concerned that he might be gay.

In 1985, the idea of a gay son was much more of a stigma than it is today. Even in 2000 the issue was just coming into the mainstream with the NBC show Will & Grace airing in 1998.

How does Billy’s family handle the idea of his potential gayhood? There is no hero’s journey without a dragon to slay.

I have a DVD of "Billy Elliot" The Musical Live" and it's brilliant. Even better than the original movie, which I saw twice. Two thumbs and two big toes UP!