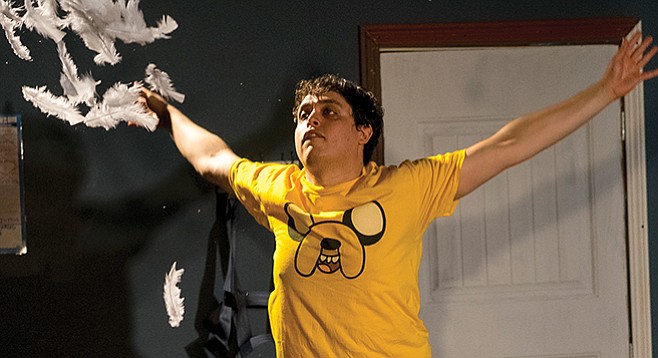 About halfway into the 80-minute piece, teenaged Lisa Martin tells her mother, Tami, she wants a dog. After a pause, Tami replies, “having a dog is complicated.” By this point the line resonates like the ripples of a boulder plunked in a pond. Tammy’s son, 18-year-old Josh, has severe autism. Compared to having a dog, the life of the Martins — trying to cope with Josh; Josh trying to cope with them — has seemingly infinite complications.

The Martins’ standard-issue living room looks comfortable, especially that overstuffed, caramel-colored sofa. Two features stand out: a green box filled with white feathers, about seven feet from the floor; and a piercing metallic squeak whenever the front door opens. The squeak prompts panic: Josh may have gone outside. The white feathers do the opposite. When Josh pulls a string they flitter down like angel wings, soothing his nerves and spirit. “Whenever Josh is happy,” says Tami, “we are all happy.”

He rarely is. The slightest noise or object out of place prompts a maelstrom. The world is not right. Josh grabs and shakes his head uncontrollably. He flaps his hands and moans. He rocks back and forth, hurls objects, or flops to a fetal position — each move a desperate attempt to ward off unseen monsters.

In The Mind at Night (a summary of dream research as fascinating as it is badly written), Andrea Rock talks about “mind maps” (“a picture of your body plotted on the brain with different parts driving different parts of the body”). Many people with autism, she says, seem “to lack the internal map.” She cites a UCSD imaging study claiming that many autistic people have “mixed-up brain maps…and can’t identify their own body parts in a mirror, which makes it difficult to build other types of mental models of the world to integrate perceptions such as sights, sound, touch, and taste.”

Josh spreads his profound dislocation to the family. Someone, usually Tami, must drop everything and be the first responder. Over the years she and husband Bill have developed codes and key words to soothe their son. In a sense, the Martins live in two worlds: one of daily routines and order; the other, which can come at any moment, requires a full-on improvisation sparked by Josh’s tantrums. These horrify therapists. The last one left not long ago.

On this day, 18 years of 24/7 alert status reach a tipping point. Bill’s mother Granny Sue, a devout Christian, is coming for a visit. She hasn’t seen Josh in three years and has no idea how much he’s changed. Offered to stay at a hotel, she says no. She and Josh will do just fine.

One of the many strengths of InnerMission Theatre’s always arresting production lies between the words: the body language is eloquent. Unspoken concerns, frustrations, and fears break through forced smiles.

Samantha Ginn should direct more. She has achieved a striking authenticity. When someone reacts, they reveal instant shock along with patience frayed to the nub by 18 years of “here we go!” The authenticity comes from experience. The playwright has an autistic child. And a program note says during the day, Ginn works “closely with children and young adults who have autism.” It shows. The cast performs a kind of unpredictable choreography. They make sudden vocal and physical shifts and rarely suggest they’ve been rehearsed — all the more impressive since they perform on Diversionary Theatre’s small Black Box stage, with the audience just a few feet from the action.

Robert Malave plays Josh as if given a green light: forget blocking and the niceties of dialogue. Break out whenever you want. Keep the actors on full alert in the micro-moment. This may not be true but it looks that way. His eruptions and their reactions are that spontaneous. Malave is unafraid to antagonize the audience with shrill panic attacks. At the same time, he makes Josh a profoundly sympathetic character. He reveals a “mixed-up brain map” so effectively you want to ask “how can I help?” and “what can be done?”

Much of Falling raises the latter question. Josh is a threat (he almost broke Tami’s arm). Bill, played by Steve Schmitz with increasing inner torment, considers breaking up the family. Enough is enough. Send him to an institution. Which one won’t matter. Daughter Lisa (Alanna Serrano, smoldering with attitude), hasn’t had a “normal” life. She finally blurts, “I hate him.” She even advocates sudden termination. Granny Sue (a kindly Kathi Copeland, who could be a bit more assertive) counsels prayer.

In an excellent multilayered performance, D. Candis Paule’s Tami must let Josh go, but to the right institution, and she can’t. He’s her son, no matter what. Paule’s mental anguish almost mirrors Josh’s as she’s assailed by nature and nurture. Throughout she shows, as Norman MacLean wrote, “you can love someone completely without complete understanding.”