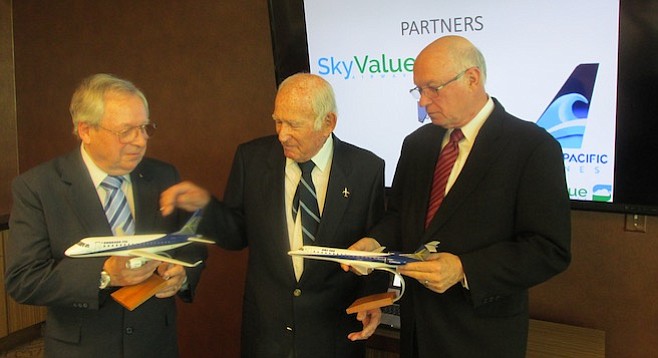 Ninety-six-year-old Rancho Santa Fe millionaire Ted Vallas held a meeting of the stockholders and supporters of his-yet-to fly California Pacific Airlines on November 16. His announcement was the first piece of good news since 2013 for the proposed Carlsbad-based airline.

With a smile on his face, Hook stated, “California Pacific Airlines is now a fully FAA-certified scheduled air carrier.”

“It’s a turn-key operation,” said Vallas of the acquisition. “We could fly today if we wanted to.”

CPAir expects to be “wheels up” out of Carlsbad’s McClellan–Palomar Airport by April 2018, flying to six airports: Sacramento, Oakland, San Jose, Las Vegas, Phoenix, and Cabo San Lucas, with up to 15 flights per day.

Vallas, who has funded most of the startup cost himself, said he will be spending $500,000 on promotion for the airline and Carlsbad airport. SkyValue Airways’ president and CEO, Darrell Richardson, who will remain in that position under CPAir, said his airline already has a relationship with volume discounters such as Kayak, Priceline, and Travelocity — a shortcoming of other startup airlines that had attempted to establish service out of Carlsbad.

Since 2007, Vallas has been working on an airline modeled after the old San Diego–based Pacific Southwest Airlines (acquired by USAir in 1988). “We’re not a feeder airline,” said Vallas. “We’ll fly people to destinations and then fly them back home.”

“North San Diego County has more population now than when PSA flew,” said Vallas. “These four-star hotels, the new FedEx buildings, and all the new corporate industrial [buildings near the airport] have been built because I was going to start this airline.”

Carlsbad Chamber of Commerce president Ted Owen confirmed during the meeting that the city has approved the building of 1.8 million square feet of office industrial space in the past 12 months.

The County of San Diego’s Jessica Northrup, communications officer for land use and environmental concerns, confirmed that on November 14, “The county received an application from CPAir and is currently reviewing it to determine if it is complete.” Last year, the straw that seemed to break the airline’s back was after several failed attempts at FAA certifications, having to furlough all employees, and turn the planes back to the leaseholder, the county canceled its previous agreements with CPAir.

Previously, county officials have cautioned the airline from making starting-date predictions. “The time it takes from when an application is accepted to when an agreement may be issued depends on the applicant’s scope of the planned services in the application,” e-mailed Northrup. CPAir’s projected operation, if accomplished, will be the largest commercial airline operation the airport has ever had.

The company has obtained five Embraer ERJ 145 regional jets, with options to purchase two longer range Embraer ERJ 170s. The 50-seat jets will be reduced to 44 seats to allow for more passenger comfort. “These jets fly faster than a 737, and they’re perfect for getting up and down quickly. Even the restrooms are larger than a 757’s,” said Hook.

As for Vallas, who turns 97 in March, “I’m cutting back [as leader of the airline] to play more golf, allowing others to take over. Besides, I’m now heavily involved in a big real estate project.”

At last? We've been waiting and waiting, and still there's no scheduled, open-to-the-public air service out of Carlsbad. I'd like to say that I'll make frequent use of this new airline, but then I haven't seen their fares. But if this is for real, it will sure beat getting to Lindbergh and going through screening there. Now, if only they could figure out some way to avoid the TSA altogether . . .