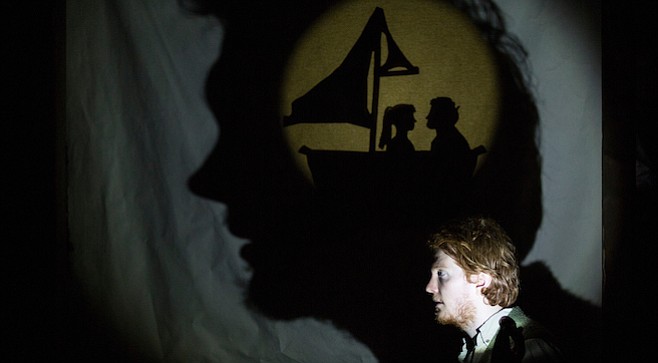 PigPen’s doozy about the end of the world

The Old Globe’s multileveled set for The Old Man and the Old Moon — pilings, planks, and wooden boxes — suggests an ancient wharf. Downstage footlights and roughhewn boards say a 19th-century theater. As the audience enters, musicians dressed in bygone labor garb — suspenders and rolled-up sleeves — tune stringed instruments. Another strolls on, as oblivious to the spectators as they are to him. Two more enter, strumming instruments. It’s hard to say just when, but at some point all seven are playing the same riff. And before you realize it, they’re standing erect in concert formation and belting out a hearty, Celtic-inflected lay.

The Old Man and the Old Moon

The metamorphosis from meandering to full frontal is almost imperceptible. After that, just about every move PigPen Theatre Company makes is so instantaneous it boggles credulity.

Take that back. When two tall-masted warships fire at each other, cannonballs float across the stage in such super slo-mo it’s as if time itself is winding down.

Exceptions aside, most effects make for hyperspeed, “whoa!” moments. As when company members combine sheets with other items and produce a man in a boat in about four seconds — all the while making it look as if they just got the idea. “Hey, gang, how about we…?” — and, jhoomp! There it is.

PigPen Theatre Co. combines the antique with 21st-century artistry. The Old Man feels like the kind of tale a sailor would spin on a long, lonesome voyage, destination unknown, or, in this case, to a war zone. And just about everything the cast does is hand-crafted: puppets, silhouettes on canvas drops, objects created from “found” items (the set, costumes, and puppets designed by the obviously gifted Lydia Fine). To keep alive, Scherazade had to tell 1000 stories. PigPen Theatre, it would seem, has found 1000 ways to tell one.

And it’s a doozy about the end of the world. The moon, it turns out, is an immense bucket filled with liquid light. And the bucket leaks. That’s why the Old Man must climb a ladder and refill it, nightly, much to the chagrin of his wife. At their wedding, he promised adventure. But he’s stuck. If the moon empties, chaos will surely ensue. So she leaves, her patience having leaked out. So, should the Old Man tend to the moon and keep chaos at bay or find his wife? He chooses love over duty and follows a tune she was humming, which appears, like a trail of bread crumbs, at various locales. Meanwhile, the moon is leaking.

Problem is: where do you find liquid light? The best prospect, they say, is at the City of Light at the End of the World. The city has oodles. But how to get there — if there’s a “there” actually there — becomes an odyssey. The Old Man boards a ship, gets confused with a legendary figure, and steers it west, toward the End of the World. He spends time in the belly of a large fish (not a whale, mind you, their ribcage is different) and in an air balloon. It’s as if he’s Odysseus, Jonah, and Phileas Fogg, of Around the World in 80 Days fame, wrapped into one.

It’s a shaggy-dog shanty that, except for a few small sags, flows like an oceanic current. The seven cast members, musicians all, sing songs and antic tunes with a Celtic lilt and bounce. Most play multiple instruments, all acoustic, except for an anachronistic electric bass guitar. And they are crack musicians. They began as a band, in fact, and will perform at the House of Blues (June 5 and 19) during the show’s run.

They are also crack physical performers. They often move as one, leaping about the set like a human kaleidoscope or freezing into tableaux with stopwatch precision. And each knows how to take stage and project.

Add Foyle sounds, as if they’re doing a live radio broadcast with noises invented from unlikely objects. Plus, projections and comic silhouettes on canvas flats with a Brechtian touch: you not only watch, say, a ship cross a roiling sea or the cannonballs, you also watch the hands holding them as well.

The show had a couple of sags. But they may have felt that way because the pyrotechnics took time off. And the story’s at once epic and goofy (one follows it to see what they’ll do next, not where it’s going). But it’s hard to imagine a more theatrical presentation. Or more inventive.

The Old Man and the Old Moon, by PigPen Theatre Co.

Playing through June 18; Sunday, Tuesday, and Wednesday at 7:00 p.m. Thursday through Saturday at 8:00 p.m. Matinee Saturday and Sunday at 2:00 p.m.; TheOldGlobe.org

Great show! Innovative and talented crew, excellent musicians, all of them. Worth seeing, for all ages.