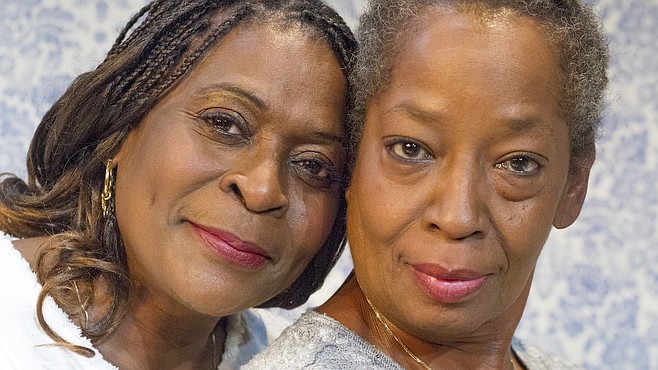 Opposing views of American history, from Jim Crow to the Harlem Renaissance and Civil Rights

The Delaney Sisters don’t like to be called “African-Americans.”

New Village Arts’ Having Our Say: The Delany Sisters’ First 100 Years is one of that company’s best shows in its 16 seasons. Sarah L. “Sadie” and Elizabeth “Bessie” Delany don’t like to be called “African-Americans.” They are “Americans,” they say. And as of 1991, had been so for more than a century: Sadie’s 103, Bessie, who helps her older sister get around Christopher Scott Murillo’s intricately detailed set, is 101.

As they prepare a meal to celebrate their late father’s birthday, the Delanys relive American history from Jim Crow to the Harlem Renaissance and Civil Rights. Since they are opposites — Sadie avoids conflict; Bessie creates it — they tell their tales from different, and deeply personal, points of view. And the tellers, Milena (Sellers) Phillips as gentle Sadie and Sylvia M’Lafi Thompson as volatile Bessie are first-rate-plus. They are engaging hosts, spellbinding narrators, and talented chefs, since we watch them prepare a complete dinner as they recall their last 100 years.

Having Our Say: The Delany Sisters’ First 100 Years, by Emily Mann, adapted from the book by Sarah and Elizabeth Delany

Playing through June 11; Thursday through Saturday at 8:00 p.m. Matinee Sunday at 2:00 p.m.; newvillagearts.org