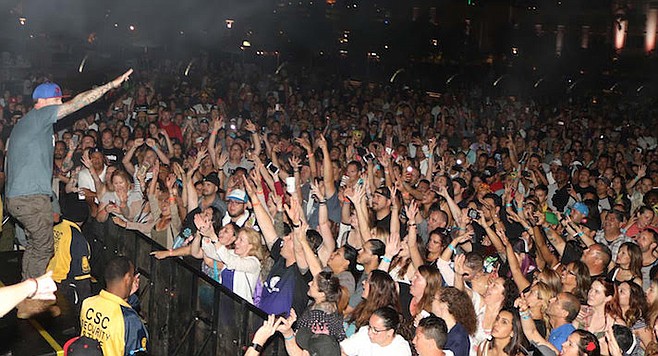 The emoticons and selfies

“Last Nite! #SquadGoals #TacoFest2017 #VanillaIce” were a part of HipHopTrooper‘s descriptors which garnered him 1,231 likes on Instagram. The photo was of him in red Star Wars-esque gear, and his cosplaying-squad dressed as two ninja turtles, Megatron, a shark and Tron. To the millennials, the photo and hashtags were sufficient enough intel. 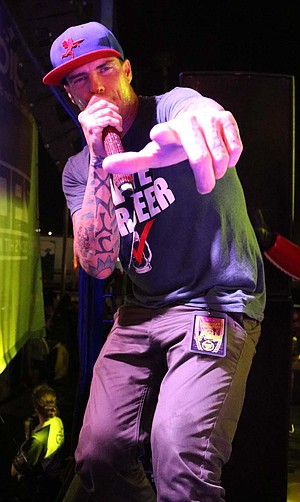 “Rob [van Winkle, aka Vanilla Ice], was very aware of the importance of sharing himself for selfies."

To some Gen-X-ers though, additional “411” could be added in the caption, like: “I’m cold-chillin’ VIP style on the ‘dl’ (downlow) backstage with the posse,” then followed with a hang-loose emoticon (a la Beavis and Butthead) and further emphasized “funna go up on stage with Vanilla Ice, YEP YEP.” 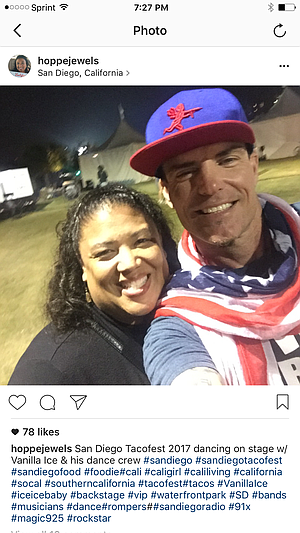 … in layman’s terms, it should read: At about 8:30 p.m. on Saturday (May 20), Vanilla Ice will perform to a sold-out crowd of 8,500-10,000 fans (per estimate by a San Diego Police Department officer on location) at the Taco Fest 2017 event held at the Waterfront Park located at 1600 Pacific Hwy. I am one of five backup dancers. Pretty cool costumes, eh?

“Rob [van Winkle, aka Vanilla Ice], was very aware of the importance of sharing himself [and his dancers] for selfies,” said Sara Bendrick, 32, “he is an icon, whether you like his music or not, [and] you’re going to share a selfie, and spread the word (via social media) if you were lucky enough to get one. Which in turn keeps him in the public eye.” 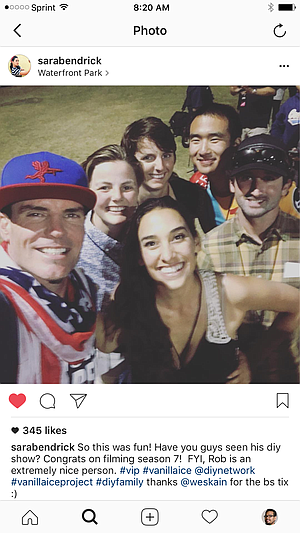 Bendrick was referring to Vanilla Ice taking many selfie photos and videos with the attendees throughout the night. Many at the show posted their concert experience on Facebook, Twitter, Snapchat … and Bendrick’s Instagram selfie with Vanilla garnered about 345 likes. Just like Vanilla, she understands “free promoting” thanks to a smartphone and a free app. She is pushing her own TV show (pilot) in hopes to be aired on the DIY network like The Vanilla Ice Project. 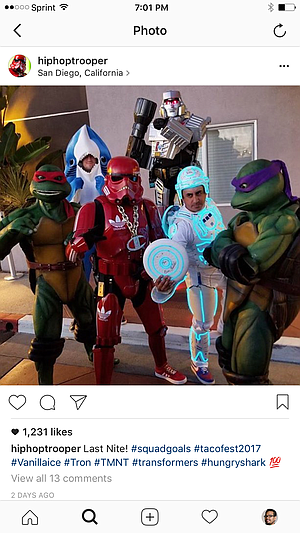 “He was pretty much a master of capturing the event, involving the crowd, asking lots of ladies up on stage to dance and party, and made it a friendly experience for everyone,” said Edward Holland, 51. “After the show it was clear that connecting with the fans by taking a lot of cell phone shots was important to him, and no, I did not take a selfie, but luckily someone took a shot for me.”

Holland does not need to take selfies with Vanilla because he helped in the production of the original “Ice Ice Baby” music video back in 1990. (The music video on YouTube has over 170 million views since it was uploaded in 2009.) 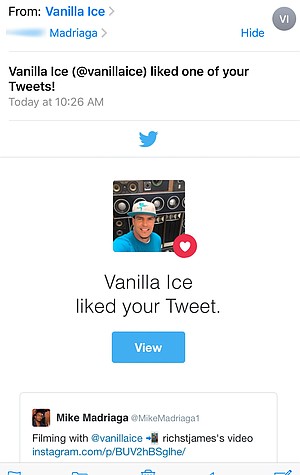 “… they put him in special clothes, accentuated his hair cut, changed up the dance routines, added a real band,” Holland said, “it was cool to have my first real music video I worked on playing regularly on MTV.”

Marketing and promoting has changed since the days of paper-fliers and mixed-tapes. With technology surpassing the “88 mph” pace of communication; such can be done now in under two minutes with a push of the red button (on a touchscreen), a 140-character post, one finger-swipe intertwined with a finger-squish to copy and paste, followed by the inertia of an index-finger-clicking send. 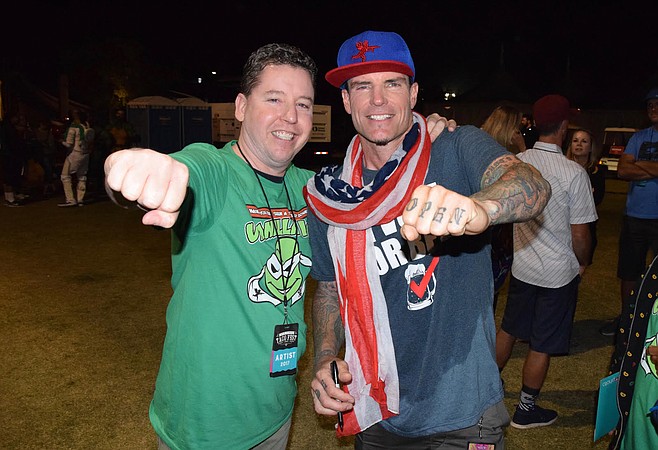 Edward Holland helped in the production of the original “Ice Ice Baby” music video back in 1990.

“My fave part of the Vanilla Ice concert is when he brings fans and friends together on stage to kick off the dance party,” said Emily Hoppe. She was one of the 30 or so people that got to dance on stage after Vanilla performed “Play that Funky Music (white boy)” — she too shot a video and took a selfie with him. “Brand awareness via social media has exploded, and if you haven’t hopped on the train you’re missing out!”

“To concert promoters,” said one fan (waiting in line for an autograph), “that’s golden.” He explained that if a celebrity is engaging with his/her enormous social media following, it takes less money and time to promote an event if they are headlining and promoting such on their feeds. Furthermore, “if their entourage has a following (like HipHopTrooper’s 88K on IG), that is a bonus, and not to mention the oodles of selfie shots with fans from previous concerts and then their followers; it’s a digital-snowball effect.”

As Vanilla Ice’s promotion strategy has changed, so has his look. This night he was wearing construction boots, a fitted baseball cap, and a shirt that read “I Vote for Beer.”

Holland added that Vanilla Ice was able to capitalize on another smartphone-phenomenon. “… the song (Ice Ice Baby), still charts (on Billboard) today as a ringtone."