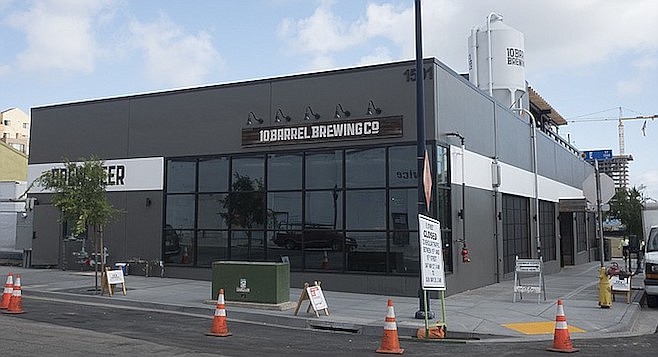 10 Barrel to be a 20-barrel operation

And Bud Light's marketing head among those licensed to brew there

It's new brewery season in San Diego. As many as six new operations are opening to customers in May alone. That includes the new brewpub 10 Barrel, which plans to close off a couple of East Village streets for a grand-opening block party on May 27.

However, unlike the other new businesses, 10 Barrel is not locally owned. Garrett Wales, Chris Cox, and Jeremy Cox founded 10 Barrel ten years ago, in Bend, Oregon. Since that time, it has expanded to open brewpubs in the reliable craft-beer markets of Portland, Boise, and Denver. And it's been doing so as part of the largest beer company on the planet.

It's also well documented that San Diego craft breweries are not happy about this. The San Diego Brewers Guild has accused 10 Barrel of being a "sheep in wolf's clothing," co-opting the San Diego craft-beer brand on behalf of a large corporation that uses its massive resources — sometimes unethically — to take market share away from the companies that established San Diego as a beer mecca. Recent news backs up this idea.

Just in the 16 months since the 10 Barrel brewpub was announced, California's ABC fined Anheuser-Busch $400,000 for using illegal "pay to play" practices to entice beer retailers to buy its beers. More recently, it leveraged its ownership of South African hop farms to completely cut off the supply of South African hops to all the craft-beer companies that have been using them.

Garrett Wales insists 10 Barrel is simply spending InBev's money, and production will not be influenced by its corporate ownership. He pledges that Benny Shirley, who moved down here from a 10 Barrel location in Bend to be the brewpub's head brewer — has free rein to produce beer he wants, and the priority is placed on making a quality product. There's no reason to think this will not be the case, nor that the beer won't taste good.

However, neither Wales nor the Coxes will be moving to San Diego to operate the business. In fact, their names aren't the ones listed on its brewing license. Instead, it names Andrew Goeler, Thomas Larson, and Michael Taylor as its managing officers, along with the corporate entity: Anheuser-Busch, LLC.

Larsen, Taylor, and Goeler are employed by AB InBev. In fact, three days before the ABC issued 10 Barrel's East Village license, Anheuser-Busch promoted Andrew Goeler to be head of marketing for its Bud Light division. This means the man responsible for improving sales of the top-selling beer in the United States quite literally has a license to make and sell beer in San Diego under a brand name that explicitly implies small-batch production.

Due to its ownership, 10 Barrel's brewpub doesn't qualify for the type 23 small-beer manufacturer license possessed by over 90 percent of San Diego's beer businesses. Its is a type 1 license, designated for breweries producing more than 60,000 barrels annually. This 10 Barrel brewpub does not have the capacity to produce that much, of course, but it does have the capacity to brew more than a 10 barrel brewery. Despite its name, the multimillion-dollar brewpub Anheuser-Busch is opening in East Village actually has a 20-barrel brewhouse.

A big corporation in the U.S. breaking the rules then hurting honest competition...Shocker!! When these companies buy Congressmen and women every 2 years, why would we be surprised that they don't abide by the rules everyone else does? 2008 witnessed the largest theft in human history, 100% subsidized by the U.S. Treasury with accompanying bonuses in the millions for the several hundred or thousands of "perps" that actually committed the fraud and theft in their daily rounds at their Wall Street offices. These criminals walked away with a big cash bonus for the theft and fraud. In the most incarceration crazy country in the world these thieves in Brooks Brothers suits who were caught dead to rights, no question about their culpability, ended up making money paid by our taxes. Why would the largest brewer in the world behave differently? The Busch family has the same protection. Billions of dollars. If you believe they are going to act differently in America's Finest City, I've got some hot stocks I would like to interest you in. Guaranteed pay off, just trust me for awhile. Pay no attention to the Brazil post mark and the fact we don't have an extradition treaty with them. It's all good.

I'll quibble with your comment in regard to the Busch family. That family no longer "owns" the corporation, and I doubt that any of them work there. It is just a huge multinational corporation with Brazilian, South African and Belgian roots. It is incorporated in Belgium. But it now has a flock of Mexican beers, including the always-popular Corona, markets German beers, and is noted for its Stella. More recently it took over SAB Miller, which had been its largest competitor. All that global presence isn't a sign of strength, IMHO, as much as an indication of weakness on the part of the mass-produced brands. In short, AB InBev is losing market share, and has to resort to gimmicks to try to counter the changes sweeping the brewing industry. I doubt that this multi-national monster corporation can make the local experiment work and pay off. Don' worry, be 'appy.