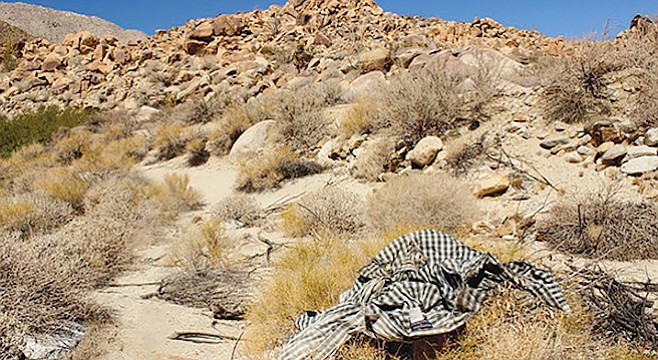 A year in an immigrant’s shirt

While crossing the border at San Ysidro, Valentina Forte-Hernandez, an unassuming and petite artist, aroused the suspicion of border agents due to the tangle of wires and circuits in her trunk. She had to submit to a secondary search. Forte-Hernandez was headed back to the U.S. after the first part of a three-night, three-location exhibit in December 2016 called Arte on the Line, which featured several artists whose work is inspired by border-region culture. Estación Federal, a former gas station that’s now a multipurpose space near the border crossing in Tijuana, hosted the first night. The traveling show moved to a curator’s loft on India Street for the second installation, then to Border X Brewing in Barrio Logan. 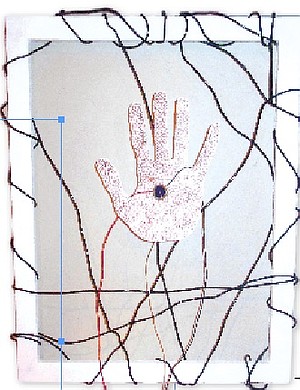 The wires and circuitry in Valentina Forte-Hernandez’s artwork raised the suspicions of border agents who found it in her trunk.

“It took a bit of convincing for the customs officials to see we were artists and not terrorists,” Valentina laughed, “but it all worked out.”

The piece in question invites observers to interact with it, instead of the usual “look, don’t touch” rule of art. Buscando de un Amor Correspondido is a sculpture that incorporates a circuit (that she built), which is activated by two people putting their own hands over two paper hands in frames on the wall. Wires connect the hands to a dainty tree-like figure in the middle, with heart-shaped translucent paper leaves. When two human hands block the light sensors behind tiny holes in the paper hands, the circuit fires up and causes tiny red LED lights in the leaves to blink in sequence. The pulsating red light brings to mind a heartbeat. 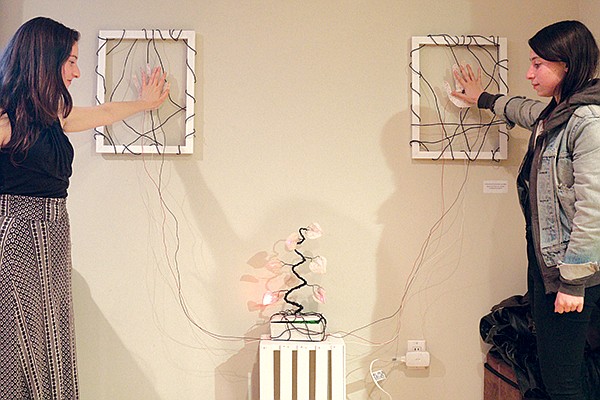 The frames are placed far enough apart on the wall that the piece functions only when two people come together to make it work.

At 22, Los Angeles–based Forte-Hernandez has spent “half her life” tinkering with wires, circuits, lights, paper, and watercolor to produce delicate, plant-like forms that function electronically. Growing up on the border between Berkeley and Oakland, she lived with her mom and grandparents. Grandma and Grandpa, both artists, collected artesanía — handicrafts and artwork — that they displayed on the walls of their home. The ranchera music he listened to in the house — and encouraged her to sing and play on the piano — keeps the spark lit for Valentina since her grandfather, her “greatest motivator,” passed away last summer.

“Buscando por un amor correspondido” translates to looking for a corresponding, or requited, love. “Not quite right” in English, she explains. Forte-Hernandez chooses titles in Spanish for all of her sculptures. In preparation for her graduation exhibit at Hampshire College in Massachusetts, she had to think carefully about translating each title for English-speaking audiences. For the Tijuana and San Diego shows, she “didn’t even have to think twice” about keeping the names in Spanish.

On exhibit at the home of independent curator Antoinette Williams, Forte-Hernandez’s artwork warmed up the walls of the Little Italy machine-shop-turned-loft on a chilly winter night. Photographs by San Diego State professor of rhetoric Jill Holslin mounted on another wall gave observers a close-up look at the decayed state of the border fence. With an expansive view of Lindbergh Field and the harbor, Williams’s three-story space provided perspective. Sounds of aircraft overhead and the constant movement of boats and cars in the night were a conspicuous reminder that while many are free to travel where they may, many are not. But when a quartet of son jarocho players assembled in Antoinette’s kitchen and began to strum their instruments, the low-flying planes became mere background noise.

Germaine Lita, one of the players, explained that son jarocho roughly means “mixed.” In the past the term was slang, but the derogatory connotation has fallen away with modern use. The music hails from Veracruz, a state on the east coast of Mexico, where indigenous, African, Spanish, and other influences came together during colonial times. Lita played lead melody on the leona, a guitar-shaped instrument. Diminutive mandolin-like jaranas supplied the sad yet sweet harmony, while the requinto — a bass — gave the music gravity. Dancers on a low platform, absent that evening, traditionally make up the son jarocho percussion section. 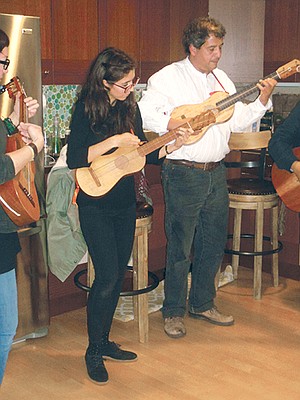 Artist Teresita de la Torre, whose work was also on display for the three-day show, looked down in deep concentration as she moved her slender fingers across the strings of her jarana. That night was the first time the four had played together.

De la Torre, a performance artist born in Guadalajara and raised in Laredo, Texas, is earning her master of arts at Cal State Fullerton. Her work 365 Days in an Immigrant’s Shirt documents the year she spent wearing a tattered plaid button-down she picked up near the U.S.-Mexico border. De la Torre was visiting the area on a volunteer excursion with Water Stations, a San Diego–based nonprofit that places drinking water in the desert to aid people passing through the tough terrain. When she found the shirt on top of a bush near Ocotillo, the black-and-white fabric was filthy and already filled with holes. Teresita had no way of identifying whom the garment had belonged to, but she did know that some women wear masculine clothes to minimize unwanted attention or harassment while crossing the border. Though she did not yet know what she would do with it, the artist felt compelled to take the shirt home.

De la Torre’s teacher suggested she try wearing the shirt for 30 days. But she had her doubts and superstitions about putting it on. “What if something bad happens to me?”

The whereabouts of the shirt’s discovery were also a deterrent: she had heard of people wearing clothing found on the border route and having to get a limpia, a de-lousing, upon arrival at a processing station.

The day President Obama signed Deferrred Action for Child Arrivals into law, De la Torre finally donned the shirt and wore it to a demonstration in Santa Ana. Sporting the tattered camisa around politically conservative Orange County, she hoped to start conversations about why she was wearing it. The idea worked. On more than one occasion her sartorial choice garnered a sardonic, “Are you going to a zombie convention or something?”

A fellow grad student deemed the idea “disgusting.” Her sister joked that she should be nominated for the reality TV show My Strange Addiction.

“But,” said De la Torre, “this comment from Instagram made me weep like a baby: ‘Thank you for adding me to your Insta! I crossed the border with my mom when I was ten. Our maletas [suitcases] were stolen in Tijuana, and I’ve often wondered where our clothing and the memories we had packed in the suitcases ended up. I hope that the man who once owned the shirt you wear made it out of the desert and perhaps wonders, ‘Donde quedo mi camisas?’”

For the exhibit in her home, curator Williams suspended the shirt from the ceiling in the steep switchback stairwell. It has disintegrated so much that the scraps hanging from the still-intact collar blended into the bare concrete wall behind it, making it almost unnoticeable. Many visitors walked past the garment before realizing what it was and returned to look at it. 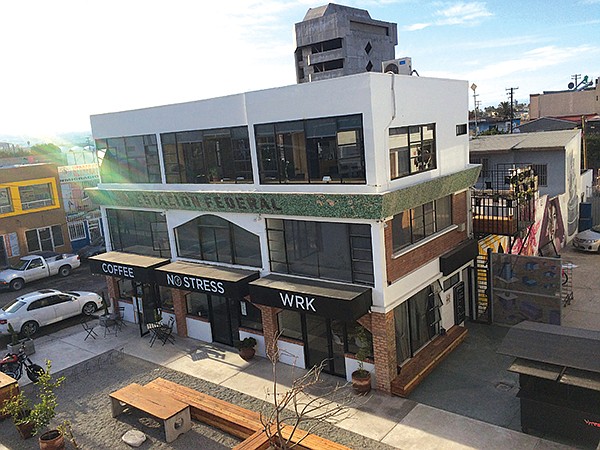 The physical border itself is the subject of Arte on the Line organizer Emily Packer’s work, La Frontierra Chingada. The film made its Mexico debut for a small group of 15 viewers at Estación Federal, then crossed to Border X Brewing on Logan Avenue for its first U.S. screening to a crowd of 30–40 beer-drinking customers. Down the street from neighborhood eatery Las Quatro Milpas, Border X shares a block with the Chicano Art Gallery and showcases art from community members. Under the watchful portrait of Un Cholo Batman, complete with ’stache and soul patch, drawings and paintings of the Virgin of Guadalupe provided a fitting backdrop for the women’s stories depicted in Packer’s piece.

A melange of documentary and experimental film, the piece begins with Packer’s curiosity about the border and evolves into a very intimate view of those affected by its presence. Emily met mothers separated from their children, mothers of those killed in acts of border violence, and a female Border Patrol agent who works in Friendship Park.

Packer grew up in Marin County, north of San Francisco, visiting her grandparents in San Diego frequently. From the window of their high-rise condo on Coronado, she could see Tijuana and the border. This viewpoint enthralled her, and as she became a filmmaker she decided to take a closer look and make a movie about it. Her grandmother’s comment in a scene filmed at the condo seems to sum up how Emily thinks many San Diegans relate to the border:

“All the way down there, that’s where the wall is.”

While a student at Hampshire College in Massachusetts, Packer commuted to San Diego and lived in Tijuana briefly to record all necessary footage. She took her camera to Border Field State Park (also known as Friendship Park) and El Parque de la Amistad on the other side of the fence. After establishing a rapport, Emily earned permission from the female Border Patrol agent to film her at her job: supervising access to an area of the park on the U.S. side where a gate in the fence can open. There, people are permitted to meet face-to-face and embrace briefly — instead of just touch pinkies through the fence’s heavy mesh wire — for special circumstances under heavy surveillance. Among other scenes filmed in the park, Packer’s film documents an opening of the restricted gate. “You have to stay neutral, because at the end of the day it’s your livelihood,” the agent said of her role in an audio interview overdubbed onto the scene. “We are the mediators. We make sure everything is safe for everyone.”

A close-up shot of the agent shows her smiling and getting a bit misty-eyed when children and mothers are reunited. She peeks at the camera briefly, then turns her eyes away and acts tough.