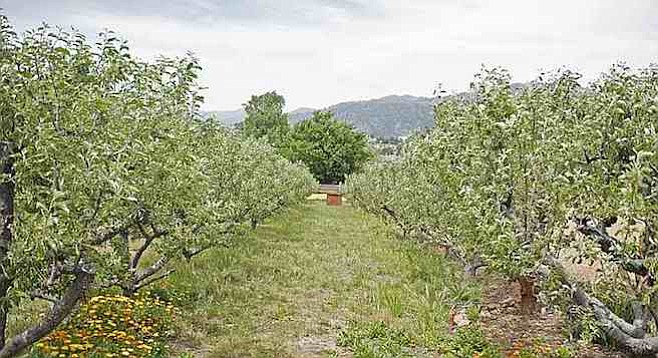 Cider house rules are for fools

Founded in its namesake mountain town, Julian Hard Cider has been a local company since its inception in 2009, with a tasting room just outside of Julian, in Wynola. However, the bulk of its cider has been produced at the source — not Julian or even California, but an apple orchard in Milton-Freewater, Oregon.

The fact Julian Hard Cider has been making cider out of state has made news over the years, particularly with regard to legal conflicts with another local cidery, Julian Cider Works, over the use of the Julian name. While some of those issues have yet to be resolved, Hard Cider cofounder Paul Thomas contends that craft cideries, like craft breweries, can only help each other compete by growing awareness of quality cider among consumers. The competition, he says, should really be with macro cider makers that make inferior product from concentrate, which is a sixth of the cost to produce.

"Being committed to fresh and all natural takes a lot of effort," he explains. "When they concentrate the juice, it kills off and damages a lot of the enzymes, and the flavor."

He adds that, while a newer generation of craft cider makers springing up in Southern California transport juice from other locations, Julian Hard Cider made the decision early on to produce cider in Oregon to ensure its product is made from freshly crushed apples, and will work the same way with its Julian-produced beverages. "Our ciders go immediately from pressing to fermentation," he says. "We make fresh cider."

While that arrangement still holds for most of the product it distributes to more than 20 states, in fall of 2016 the company began incorporating local fruit from Julian's Apple Lane Orchard.

Eight years ago, Thomas and Ken Knott started Julian Hard Cider in partnership with Keith and Priscilla Webb, who'd retired to Julian upon selling their San Diego airport Park and Ride business. In 2012, the couple bought Apple Lane because it seemed a natural fit with their growing cider interest. 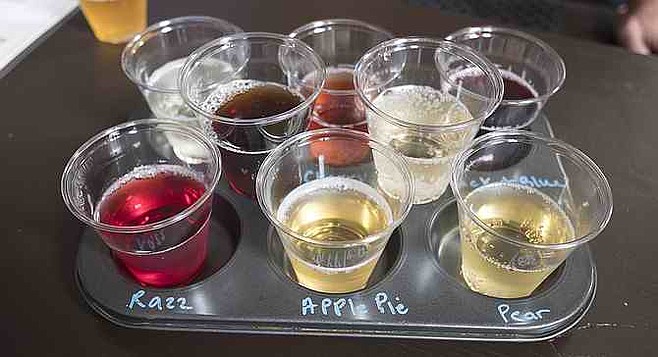 A flight of Julian Hard Ciders

At least, that’s one reason. Asked why they decided to buy an orchard, Priscilla Webb says, "Actually, boredom." The long-married retirees had finished building a Julian home and were ready for a new project. "I figured I could only clean so many hours a day," she adds. "I needed to go back to work."

Pressing apples at the orchard has given Julian Hard Cider a local foothold for cider production. It's installed a pair of ten-barrel fermenting tanks at the Webbses’ orchard, where it hopes to open a second tasting room by the fall.

"Apple Lane will be focused on specialty batches, for the local market," says Knott, "the interesting, fun stuff."

Highlighting Knott's “interesting” designation is the recent bottle-only release of Cidre Brut, made in conjunction with downtown's US Grant Hotel. The Julian-produced cider was oak-aged in a Génépi barrel — an herbal liqueur similar to absinthe — provided by the hotel. Subsequent to aging, the cider was hand-bottled with additional yeast so it would bottle-condition on residual sugars and retain a sparkling quality.

Though they are baked locally, much of the apples for the tasty pies in Julian come from Washington state.

It seems awfully self serving to declare that "fruit origin irrelevant" when you use the name Julian to establish Julian Hard CIder's authenticity. Last year, Priscilla and Keith Webb (owners in part of Julian Hard Cider) were Julian's Apple Days King and Queen. Failure to promote local fruit quality by the Apple Day's King and Queen must also be disheartening to Julian Hard Cider's other apple orchard property owners.

Julian apples took first place at the World’s Fair in Chicago in 1893, the St. Louis World’s Fair in 1904 and the San Francisco World’s Fair in 1915. Then in 1907, Julian apples won the prestigious Wilder Medal, the highest award given by the American Pomological Society." (www.eastcountymagazine.org/julian-apple-days-festival-caps-centennial-celebration-oct-3-4-additional-events-highlight-historic)

And we, Julian Ciderworks, directly measure and record fruit chemistry. Julian fruit can be twice as sweet as other areas. The following link takes you to a PDF summarizing our findings.

Julian may have the sweetest apple and pear fruit in the word. So we disagree, the origin of the fruit really does matter.