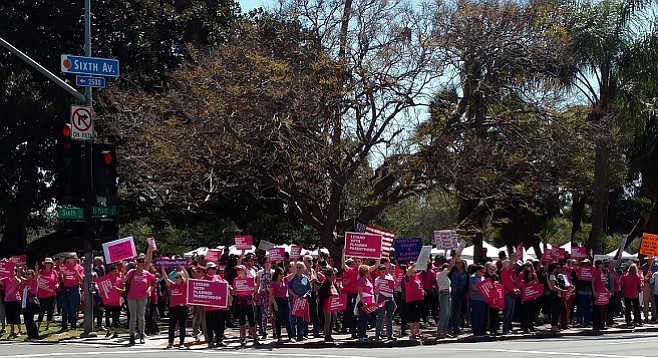 "With this disaster of a bill dead and buried, I hope that we can get to work."

Hundreds of Planned Parenthood supporters rallied in Balboa Park on Friday morning (March 24) in anticipation of a congressional vote to defund the organization that was pulled from the table by Republican backers moments before the vote was to have taken place.

The proposed American Health Care Act was intended to replace provisions in the Affordable Care Act, more popularly known as Obamacare. One tenet of the bill would have blocked funding for groups that provide abortion services, including Planned Parenthood.

Supporters of the organization argued that federal funding had never been used to pay for abortion services, but instead to provide cancer screening and other health services to those uninsured or otherwise unable to access care. The group says it serves approximately 140,000 people, mostly women, in the region.

"When I was a broke student, when I was removed from my mom's health insurance and couldn't afford my own, Planned Parenthood was there for me," Erin Panichkul of the Coalition for Reproductive Justice told a crowd assembled at the western edge of the park, many dressed in pink shirts and waving pink signs bearing the organization's logo. "Planned Parenthood is my safe space."

Congressional staffers for Representatives Susan Davis, Juan Vargas, and Scott Peters showed up to offer support to the group and general criticism of the proposed act. Peters staffer Kiera Galloway described the bill as "an unconscionable attempt to remove health coverage for so many men and women throughout the San Diego area."

Madison Shockley, pastor at the Pilgrim United Church of Christ in Carlsbad, said that religious beliefs regarding abortion shouldn't be a deterrent to supporting the broader goals of the organization.

"There is nothing in my faith that prevents me from standing with Planned Parenthood. In fact, my faith demands it," said Shockley, insisting that the group "serves the people that my God cares about" and was "doing sacred work."

Hours after the protest, House speaker Paul Ryan pulled the bill in the face of likely defeat had a vote been called.

"I’m proud that so many Americans — including thousands of the people I represent in San Diego — made their voices heard and urged their representatives to oppose this healthcare repeal," read a portion of a jubilant release sent by Peters following the non-vote. "With this disaster of a bill dead and buried, I hope that we can get to work — together — on real reforms to make healthcare more accessible and more affordable for the American people."

Was this a march? Where did they start|end? I was at the park all morning March 24 and did not see them.

Why do we only see events mentioned after they happen? Other people might have wanted to join this group. I suppose you will wait until after the big border rally tomorrow March 25 to tell us about what we missed.

This would probably be better described as a rally than a march, as participants gathered to hear speakers and then lined street corners to picket.

As far as the timing, we can't report on things that happened before they happen - we do have an events calendar where organizers can submit their events beforehand, though.

As Cassander notes, though, it appears the border rally has been cancelled (had I not received the same reports I may very well have been there too).

Good point, but don't waste it on tomorrow's example: http://sandiegofreepress.org/2017/03/san-ysidro-border-rally-canceled-questions-sponsor-remain-unanswered/

I'm not that technically savvy, but it seems there should be a way to tie the Reader's events into Facebook, or at least subscribe to certain kinds?

Cassander- thanks for that link, I couldn't find any better info. This does seem to be a scam right from the start as the perpetrator has not been seen or heard from of late (and may have never visited San Diego). I don't risk Facebook, so maybe there's more info there than on the public internet.

Few people or politicians understand how insurance works. Insurance companies are for profit. To generate profit they have to have people covered who are healthy to defray the cost of those who are not. The larger the pool of people the lower the price of insurance. Competition between insurance companies does not lower the price it increases it because it lowers the number of insured. The fewer people in the pool the more it costs. It works the same with employer provided insurance. The larger the employer the more people in the pool. The individual market is costly because only those who really need insurance buy in. This is called adverse selection against the plan. Insurance is affordable only when all are in.

Whether it was a march or just a rally, the group seems to be missing a point. That Obamacare bill didn't go to a vote, not because it vindicated the current program or Planned Parenthood, but because the majority party in the House couldn't agree. Many in the GOP wanted it to go further. This push for a repeal/replacement hasn't gone away; it will be back again.