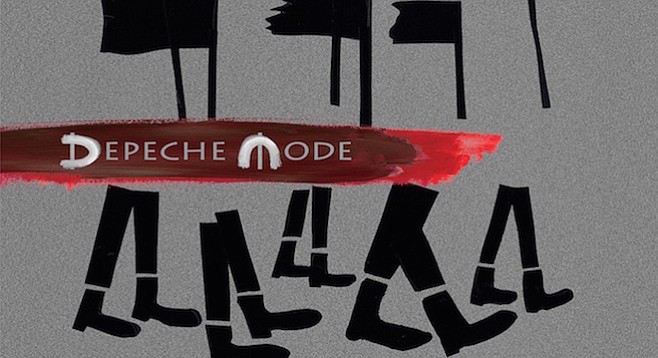 English alt-rock band gets in the Spirit of the times

In a world that seems to be crumbling, where the bad guys have won and are beginning to remake the planet to fit their greedy agendas, art has become more valuable than ever. With their newest album, Spirit, Depeche Mode have stepped into the fray with their bleeding black hearts upon their sleeves and they are righteously pissed off.

...off of Depeche Mode's Spirit album

“Where’s the Revolution,” the album’s first single, is a blistering track that is a call to arms against Trump’s America. Lead singer Dave Gahan spits out his words with venom, calling out “patriotic junkies” who abuse citizens’ rights, rule the masses with religion, and use “terror as a weapon.” The song urges for the dispossessed to jump on the revolution train and make their voices heard. The rest of the album follows “Revolution’s” tone. “Scum” is an angry ode to those in charge, and “Going Backwards” laments the current state of humanity, saying that we are “Going backwards/ to a caveman mentality” and that “We have not evolved.”

Though not everything is so heated. Songs like the quiet “Fail” and “The Worst Crime” quietly meditate on how we as a species could have ended up in the mess we have found ourselves in. “You Move” and “Poison Heart” are gothic odes to sadomasochistic ecstasy, and sound like they could have been lost cuts from the band in their prime.

The album is densely layered and textured, recalling the sound and mood of 1987’s Music for the Masses and 1990’s Violator. This is the most electrifying Depeche Mode have been in years and if there is one thing to be learned from Spirit it is that in this increasingly disjointed time we need bands like Depeche Mode to shine the light on injustice and help make the world right again. Until then we will continue to make the same mistakes we have always made.