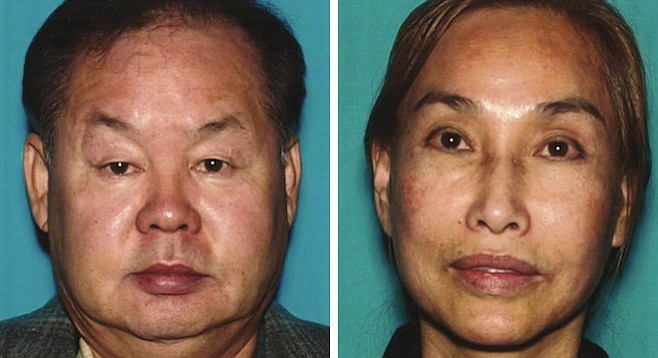 Hyok "Steven" Kwon and his wife, Woo Hui "Stephanie" Kwon, were sentenced to prison yesterday (March 15) for concocting and carrying out a complicated scheme to avoid paying workers' compensation insurance premiums and employment taxes for their janitorial company, Irvine-based Good Neighbor Services. He was sentenced to eight years in custody and she got four years and eight months. Each has been ordered to pay $5 million restitution to insurance carriers and the California Employment Development Department.

They were indicted in December for hiding the existence of 800 hotel workers and thereby evading personnel-related taxes. At the time of the indictment, their caper was considered the largest insurance premium fraud in San Diego history.

Thunderheads in the east, flea season

Orioles moved from Sycamores to palms
Next Article

Rappers sound off with sound investments

Hyok "Steven" Kwon and his wife, Woo Hui "Stephanie" Kwon, were sentenced to prison yesterday (March 15) for concocting and carrying out a complicated scheme to avoid paying workers' compensation insurance premiums and employment taxes for their janitorial company, Irvine-based Good Neighbor Services. He was sentenced to eight years in custody and she got four years and eight months. Each has been ordered to pay $5 million restitution to insurance carriers and the California Employment Development Department.

They were indicted in December for hiding the existence of 800 hotel workers and thereby evading personnel-related taxes. At the time of the indictment, their caper was considered the largest insurance premium fraud in San Diego history.

A really refreshing cocktail for summertime.

The state and DA's are getting really pixxy about people who cheat on Workers Comp. Many years ago a roofing contractor who was underpaying (but still paying quite a lot) got sentenced to about three years for his crime, and I think he pleaded guilty.

Roofing is the most costly insurance. It's about one-to-one pay in for the hourly rate of a journeyman roofer. A company paying a roofer $20 an hour is also paying about $20 an hour in Worker's Comp. Roofing is also one of the most dangerous trades.

Ponzi: It's my understanding that roofing is not only dangerous, it's a strain on the body. Carpet layers suffer from body problems, too. Best, Don Bauder

That was why, I'm certain, that the guy I mention decided to cheat. Your profit margin on jobs might depend upon it. Yeah, it's dangerous and nasty. Hot sun, nail guns, and falling off the roof all add up to hazardous duty.

Visduh: I think law enforcers should battle cheating on workers comp. It's not a victimless crime. Best, Don Bauder

Uh, no. Workers Compensation Insurance has no connection to employee tax returns. The crunch would come when the employee is injured, perhaps seriously, and shows up at a clinic or hospital, only to learn he/she has no record of coverage, and no sort of identification from an insurance company vouching for coverage. This is a levy paid by the employer, not the employee, and the sort of safeguard you describe isn't there. The way the fraudsters pull this off is with immigrants who have no concept of disability insurance, or many of whom are here illegally. They get hurt, they suck it up. Nobody knows nuthin'.

JustWondering: I don't know the answer to your question, but the charge against these people is hiding the existence of these workers. Best, Don Bauder

Murphyjunk: I don't know if the pair headed for prison are immigrants. Best, Don Bauder

Unless roofer's insurance covers everything, the roofers are getting humped by the insurance industry. The fact that insurers are able to keep their "statistics" secret is an abomination. Of course, collusion, especially between "government" and industry is not strained. As we move dumbly toward oligarchy or monarchy, it should be no surprise that tar vapor-addled roofers are the bait fish (or shiny objects) used to lure us away from the mega-crimes.

Flapper: The quality of mercy is not strained. Are roofers really addled by tar vapor? Best, Don Bauder

Get ALL the colluders, not just the dummest.

Flapper: If we nailed everybody who employ collusion in their lives, the number of people in prison would be triple the number on the outside. Best, Don Bauder

The quality of cynicism is terribly strained.

Flapper: Yes, I apologize for that one. I was straining -- definitely trying too hard. Best, Don Bauder

This is the TV commercial that runs on local stations:

A couple decades ago, the workers comp rates in California were the highest in the nation, placing in-state employers at a disadvantage with out-of-state competitors. (That was far from the only disadvantage of doing business in this state.) More recently there have been "reforms" made to WC, and now I don't hear or see the intense complaints. But some occupations, such as construction of all kinds, and some aspects of manufacturing have shockingly high rates. Employers in this state have to be savvy about all the costs of employing, where failure to anticipate things like WC and unemployment can be devastating. This is not a time and a place when you can just hire a person or two or three and figure that their gross income is about all you'll be paying.

When I was running an accounting department, I remember the auditors from the workers comp carrier being very good at spotting errors. But they based their findings on complete and accurate payroll records. I'd suppose these cheaters actually had managed to run a large payroll that never showed up anywhere around an auditor.

Ponzi: The ad didn't move me. How about you? Best, Don Bauder

Flapper: Are inaccurate payroll records actually "terrifying?" Save that word for the administration now in Washington, D.C. Best, Don Bauder

Flapper: I know of one twit who tweets. Best, Don Bauder

Seem ta me that short for twitter should be "twit."

Flapper: When I was writing for the U-T, I coined a word: "nitpwicked." It's being nitpicked by a nitwit. And you're right: short for twitter should be "twit." Best, Don Bauder

That nitwit is a pwick alright.

And I shoulda said that short for one who blows off on twitter is, to wit, a twitterer. Maybe the short for should have two "t's?" Twitt?

And as the moving pixel twit, and having twit, moved on . . . (not soon enough)

Flapper: Decades ago, the Chicago Cubs had a second baseman named Twig Terwilliger. That was long before twitter. Best, Don Bauder

Back then, if you didn't go by your nickname, you were nobody.

Forest Green: I am not sure I understand your statement, but I do think that in workers comp Obamacare, and Medicare, for example, insurance companies make out like bandits. Best, Don Bauder

Most insurance companies make out well. It's like gambling, and they are the house. You pay a premium betting something bad will happen, they accept your premium betting it won't happen. Their underwriting secrets and lobbying power keep them in the money.