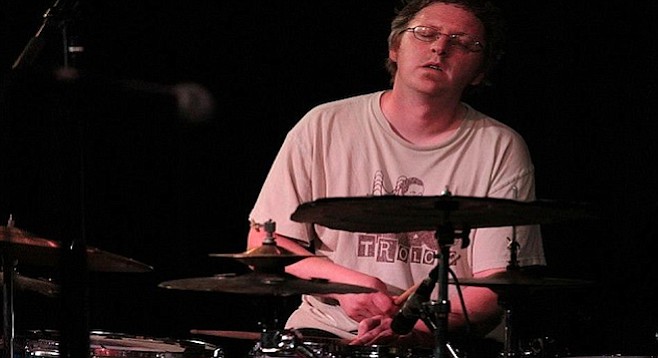 Not a lot of sweet rooms

“I think San Diego has a really wide music scene and it’s fairly splintered, too,” says drummer Nathan Hubbard as he tries a variety of techniques to entertain his two-year-old son while we speak. “There’s not a lot of crossover, and I enjoy that. I like the fact that you can go out and see totally different things on a fairly regular basis.

“There’s a bunch of cool spots that I enjoy. If it’s a rock gig, there’s the Casbah or the Soda Bar. On a smaller scale, I like the Tower Bar or the Black Cat. For jazz, it’s usually Dizzy’s or Seven Grand.”

Hubbard is guarded with his opinion on great places for drummers to play in San Diego. “There’s not a lot of sweet rooms,” he says with a laugh. “With drums it’s a challenge. I do like the smaller room at Bread & Salt and I just did a gig at the Union Hall [now Dizzy’s], and that room actually sounds pretty good because it’s not too boomy.”

Hubbard’s days revolve around his three kids, Julia, Elliott, and Henry, and he’s a big fan of his neighborhood. “We live in San Carlos. It’s kind of the suburbs, fairly quiet, and the kids have a lot of room to play. I can get to just about anywhere in ten minutes.”

Are any of the children following in daddy’s footsteps? “They all play music. Julia is the only one taking lessons right now, but there’s a piano in the house and drums in the garage.”