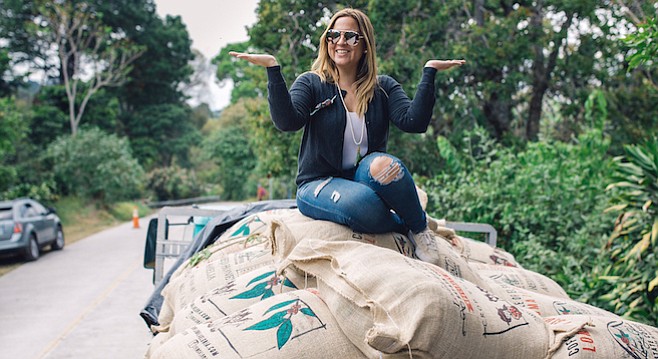 Not just organic but biodynamic beans

According to Virtuoso general manager Greg Luli, “The easiest way to explain it is organic certification is specifically focused on an individual crop…. Biodynamic goes a step further and is focused on the entire farm.” Chemicals may not be used on the farm, of course. But the idea is for the farm as a whole to be self-sustaining.

“In general, the whole farm has to work holistically as an organism,” Luli explains. Consequently, the farmers also grow bananas and other rotational crops, which are composted post harvest to replenish minerals in the soil.

Such a process is rare in the coffee world, and Virtuoso has been working with Peruvian farm La Chacra D’Dago. “It is becoming more popular,” Luli says. “This farm is the only one certified in Peru, but there are some in Brazil and India.”

For now, Virtuoso is focused solely on working with Chacra D’Dago on improving processing methods of its biodynamic beans, and has agreed to pay the farm 25 cents more per pound whenever it meets established benchmarks for quality.

In a June survey of female-produced coffee published by coffee-rating site CoffeeReview.com, a couple of San Diego roasters were highlighted for producing high-quality coffees sourced from female-owned-and-operated farms.

Citing a disparity that women perform 70 percent of farming labor worldwide, the story seeks to bring attention to world-class coffee grown on the mere 15 percent of farmland owned by women.

Twenty-five such coffees rated a score of 90 or above, one being a bourbon red honey-roasted coffee by Rancho Bernardo’s Manzanita Roasting Company. That 93-point coffee hailed from El Salvador’s Finca Loma La Gloria — familiar to locals due to a pair of talks given by owner Anny Ruth Pimentel during a visit to San Diego last year. Four of the 90-plus coffees in the survey were sourced from Loma La Gloria, which is quickly gaining repute as a valued coffee source. It’s frequently featured at Bird Rock Coffee Roasters and also roasted by Steady State Roasting Co. in Carlsbad.

Meanwhile, Bird Rock scored a 94-point coffee in the survey with a geisha coffee — a challenging bean best recognized as coming from Panama. In this instance, it was grown in Colombia, at Elisa Madriñan’s La Palma y el Tucán. That geisha scored the second highest rating of the bunch. The highest score went to another Salvadoran origin, a 95-point grown at Finca Kilimanjaro, owned by farmer Aida Batlle. That happened to be roasted by PT’s Coffee, the Kansas roasting company that bought Bird Rock Coffee in February.