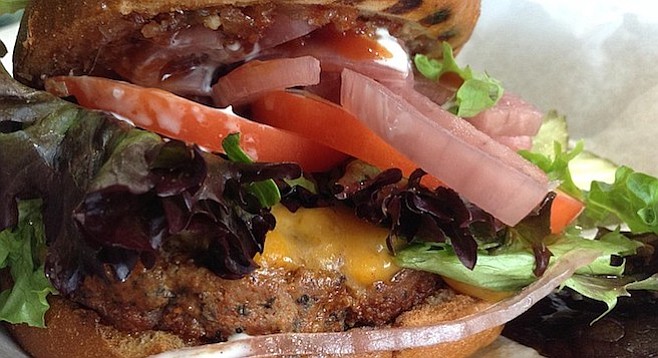 It’s not what you expect to find next door to Father Joe’s, but right on the corner of 14th and Imperial you can now join the craze for indoor skydiving and then nosh on a good burger. 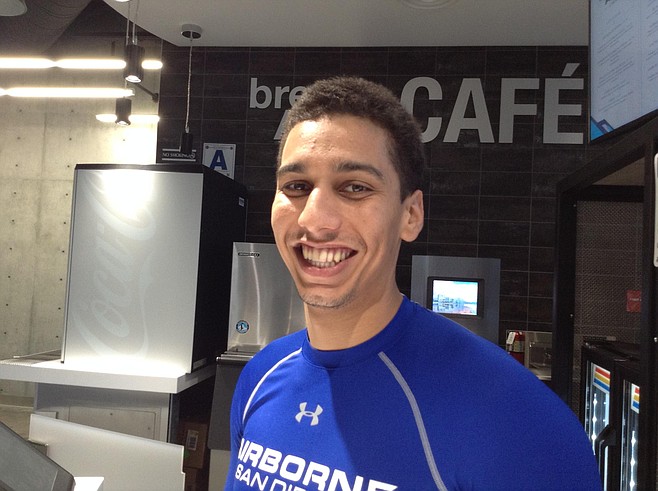 Harris has the Launchpad Chicken Sandwich every day.

The skydive, where you’re inside a transparent tube with 200-mph vertical winds keeping you airborne, will set you back about $70. Or you could just watch the whole thing from the Breakaway Cafe a few feet away. 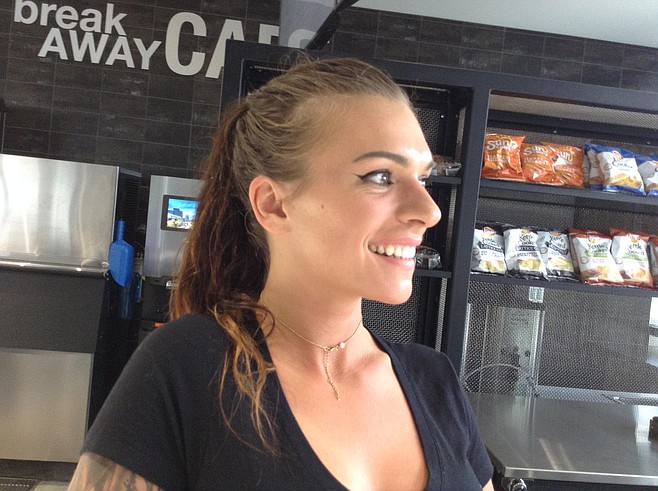 “People can get debriefed and then stick around, eat, drink, make a social outing of it.”

The cafe and the skydiving operation are in soft-opening mode right now. But it’s all happening (no wine and beer license yet). When I first discovered the place, Leana the barista was serving the flight-suit-clad skydive instructors. 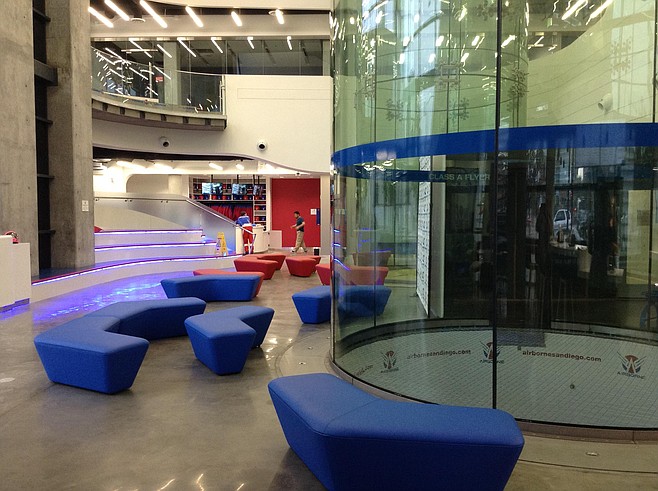 Guys diving right down the chute, then flattening out and whooshing up again. You think: dolphins.

One of those instructors, Harris, was eating a Launchpad Chicken Sandwich ($11.99), “breaded chicken tenders shaken in a spicy ranch sauce topped with bacon, lettuce, tomatoes, and pickled onion with a garlic aioli spread on a hoagie.”

“I have it every day,” Harris tells me. The guy has been an instructor of real outdoor skydiving for five years. Has 5000 jumps to his credit. He loves it. “For that one minute when you’re free in the air, you forget all past, all future. It’s pure living,” he says.

It’s also fun just watching kids, grandpas, everyone floating up on that column of air while you down a coffee or a burger.

The menu’s sandwich-centric. Like the garlic cheese sandwich ($8.99) or the Italian Stallion burger ($11.99) with marinara sauce, mozzarella, pepperoni, and “a Parmesan crisp on a garlic brioche bun,” which sounds interesting.

I end up with the Buzz Burger ($11.99), which comes with all the normal fixin’s plus “bacon jam.” I ask Leana what that is. Leana asks the chef, Rafael.

“Rafael says it’s fig jam with onion, maple, bacon, and espresso coffee in it,” she says.

Now I’m definitely interested. You also get a choice of seasoned fries, chips, or side salad. I go for the salad.

Of course I’m desperate to see someone go up. “We have a bachelor party coming,” says Harris. “But not till 9:30 tonight.”

So Leana shows me some video she took on her phone, and it’s pretty spectacular. Guys diving right down the chute, then flattening out and whooshing up again. You think: dolphins.

First thing about the Buzz Burger is the salad. It’s huge, in a basket on its own. The burger itself is savory but also sweet. That bacon jam. It’s a good combo.

Leana says the place can be quite social. “The owner has based this on the European model,” she says. “It’s not like traditional indoor skydiving places where you come, pay, skydive, and go home. Here, people can get debriefed and then stick around, eat, drink, make a social outing of it. And after you’ve done one of these crazy flights, that’s just what you want to do.”